From Infogalactic: the planetary knowledge core
Jump to: navigation, search
For other uses, see Open range (disambiguation).
Not to be confused with free range. 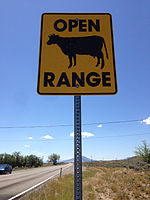 In the Western United States and Canada, open range is rangeland where cattle roam freely regardless of land ownership. Where there are "open range" laws, those wanting to keep animals off their property must erect a fence to keep animals out; this applies to public roads as well. Land in open range that is designated as part of a "herd district" reverses liabilities, requiring an animal's owner to fence it in or otherwise keep it on the person's own property.[1] Most eastern states and jurisdictions in Canada require owners to fence in or herd their livestock. 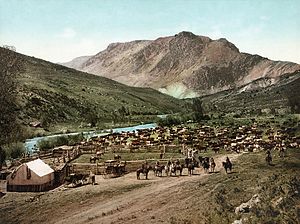 The Western open-range tradition originated from the early practice of unregulated grazing in newly acquired western territories, which was codified in the laws of Western US states as they developed written statutes.[2] Over time, as the Western lands became more developed (railroads, mining, farming, etc.) the open range laws started to be challenged and were significantly curtailed, but they still exist in certain areas of most western states.[2] Open range conditions also existed in Western Canada prior to amendments the Dominion Lands Act in 1889 which prohibited cattle from grazing on unleased land, though the practice did not disappear immediately.[3] Open range management has also been practiced in other areas, such as Caribbean and even the eastern state of South Carolina during the colonial period.[4][5]

The practice was used in Mexico, and some argue it may have been the predecessor to the open range practice in the American West,[2] which borrowed many other cattle raising techniques from Mexico.[citation needed]

Unlike the eastern United States, the western prairies of the 19th century were vast, undeveloped, and uncultivated, with scarce, widely separated sources of water. Until the invention of barbed wire in the 1870s, it was more practical to fence the livestock out of developed land, rather than to fence it in.[2] As the United States government acquired western territories, land not yet placed into private ownership was publicly owned and freely available for grazing cattle, though conflicting land claims and periodic warfare with Native Americans of the Great Plains placed some practical limits on grazing areas at various times.

Free-roaming range cattle calved, were moved between grazing lands, and driven to market by cowboys. Branding was used to identify cattle belonging to different owners.[2] Unbranded cattle were known as "mavericks" and could become the property of anyone able to capture and brand the unmarked animal.

The invention of barbed wire in the 1870s allowed cattle to be confined to designated areas to prevent overgrazing of the range. In Texas and surrounding areas, increased population required ranchers to fence off their individual lands.[6] This initially brought considerable drama to western rangeland. Its invention made fencing huge expanses cheaper than hiring cowboys for handling cattle, and indiscriminate fencing of federal lands often occurred in 1880s, often without any regards to land ownership or other public needs, such as mail delivery and movement of other kinds of livestock. Various state statutes, as well as vigilantes (see "Fence Cutting War"), tried to enforce or combat fence-building with varying success. In 1885, federal legislation outlawed the enclosure of public land. By 1890, illegal fencing had been mostly removed.[2][7]

In the north, overgrazing stressed the open range, leading to insufficient winter forage for the cattle and starvation, particularly during the harsh winter of 1886–1887, when hundreds of thousands of cattle died across the Northwest, leading to collapse of the cattle industry.[8] By the 1890s, barbed wire fencing was also standard in the northern plains, railroads had expanded to cover most of the nation, and meat packing plants were built closer to major ranching areas, making long cattle drives from Texas to the railheads in Kansas unnecessary. Hence, the age of the open range was gone and large cattle drives were over.[8] Meanwhile, ranches multiplied all over the developing West.[9] 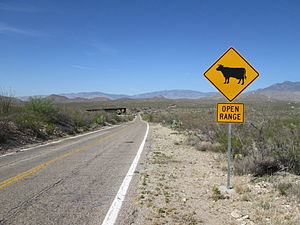 An open range sign along the Interstate 10 Frontage Road in southern Arizona.

Where there are "open range" laws, people wanting to keep animals off their property must erect a legal fence to keep animals out, as opposed to the "herd district" where an animal's owner must fence it in or otherwise keep it on the person's own property. Most eastern states and jurisdictions in Canada require owners to fence in or herd their livestock.

In modern times, free roaming cattle can be a nuisance and danger in developed areas. Most western states now limit open range to certain areas.[10] Under open range law today, if livestock break through a "legal fence" (defined by law in terms of height, materials, post spacing, etc.), then the livestock owner is liable for damages of the fenced property. Conversely, the livestock owner is not liable in the absence of the "legal fence." An exception exists for "unruly" animals, usually meaning breeding bulls and stallions, which are supposed to be restricted by the owner.[2]

On roadways within an open range area, in a cow-car collision on a roadway, the rancher was at one time not generally liable,[10] but recent law changes beginning in the 1980s gradually increased rancher liability, first requiring cattle be kept off federal highways, then other developed roads, and in some cases, limited open range grazing only to certain times of the year. In some states, such as Montana, case law on the open range has, for all practical purposes, eliminated it altogether, though statutes may remain on the books. Today, a vehicle has a much higher chance of hitting a wild animal than livestock.[10]

Laws are still in flux. In Arizona, livestock must be fenced in within incorporated areas, but are still listed only as a potential nuisance for unincorporated suburbs.[10] Therefore, in that state, bills are being pushed "to get rid of this antiquated law from 19th century. Those opposing the legislation say that "eliminating the law would put undue hardship on ranchers.[10] However, the law has sometimes been settled via legal action. In Montana, the Montana Supreme Court in the decision Larson-Murphy v. Steiner, for a short time effectively eliminated some aspects of the open range doctrine altogether, though stating that it still applied in other cases, and required legislative action to update the state's statutes to ameliorate some inconsistent provisions of the decision.[11] In that decision, the Court overturned a 33-year-old precedent that had exempted livestock owners from most liability for wandering stock on roadways (other than certain state and federal highways built with federal funds), holding there was "no duty" to motorists under open range doctrine, in Larson-Murphy v. Steiner', the Court held that there was a relationship between livestock owners and motorists on public roads, allowing motorists a cause of action for accidents involving wandering livestock on grounds of negligence. The Montana legislature then amended the statutes governing the open range to allow motorists to sue only on grounds of gross negligence or intentional misconduct.[12]

On roads in Idaho, an open-range state, livestock have the right of way: if an animal is hit and killed by a vehicle, the driver is liable for the price of the animal and for the repair for the damage to the vehicle.[1] Idaho counties can and have created herd districts, which require livestock owners to "build and maintain adequate fences to keep their animals off roads and neighboring properties"; in herd districts, the livestock owner is liable.[1]