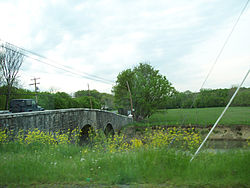 Opequon Creek is a 64.4-mile-long (103.6 km)[1] tributary stream of the Potomac River. It flows into the Potomac northeast of Martinsburg in Berkeley County, West Virginia, and its source lies northwest of the community of Opequon at the foot of Great North Mountain in Frederick County, Virginia. The Opequon forms part of the boundary between Frederick and Clarke counties in Virginia and also partially forms the boundary between Berkeley and Jefferson counties in West Virginia's Eastern Panhandle.

Streams are listed from south (headwaters) to the north (mouth).