Oregon Public Broadcasting (OPB) is the primary television and radio public broadcasting network for most of Oregon as well as southern Washington. OPB consists of five full-power television stations, dozens of VHF or UHF translators, and over 20 radio stations and frequencies. Broadcasts include local programming as well as television programs from the Public Broadcasting Service (PBS), NPR, Public Radio International, and the BBC World Service. Its headquarters and television studios are based in Portland.

OPB is also a major producer of television programming for national broadcast on PBS and Create, with shows such as History Detectives, Barbecue America, Foreign Exchange, and travel shows hosted by Rick Steves and Art Wolfe.

As of 2006[update], OPB had over one million viewers throughout its region and an average of over 380,000 radio listeners each week. The part of southwestern Oregon not served by OPB is served by Jefferson Public Radio and Southern Oregon Public Television. 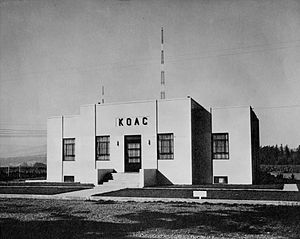 OPB traces its roots to January 23, 1923 when KFDJ-AM signed on from the Corvallis campus of Oregon Agricultural College (now Oregon State University). The radio station's call letters were changed to KOAC-AM on December 11, 1925. In 1932, KOAC became a service of the Oregon State Board of Higher Education General Extension Division[1]

KOAC Radio won OPB's first Peabody Award when it was recognized for Outstanding Public Service by a Local Station for a 1942 program called Our Hidden Enemy, Venereal Disease.[2]

KOAC-TV in Corvallis began operations on October 7, 1957. KOAC-AM-TV soon became the primary station for a large statewide network of radio and television stations. Originally known as Oregon Educational Broadcasting, it became as the Oregon Educational and Public Broadcasting Service (OEPBS) in 1971. In 1981, OEPBS was spun off from the Oregon State System of Higher Education, moved to Portland, and became the community-licensed Oregon Public Broadcasting. KOAC's former Portland satellites, KOAP-FM-TV, became the flagship of the new organization.[1] In addition to the studio and transmission facilities in Corvallis, there was another production studio located on the top floor of Villard Hall at the University of Oregon in Eugene that was connected by microwave link. Up until 1965, all programs from the Eugene studio were live, since they did not get any video recording equipment until then.

KTVR-TV in La Grande went on the air December 6, 1964 as a commercial television station that affiliated primarily with NBC and also carried select ABC network programs.[citation needed] KTVR operated as a semi-satellite of Boise, Idaho station KTVB, but had a La Grande studio at 1605 Adams Ave., producing a nightly newscast and other local programming. However, by 1967, the La Grande studio and office had been closed and KTVR became a full-fledged satellite of KTVB. KTVR was unique in the Pacific Time Zone, because as a repeater of a Mountain Time Zone station, its "prime-time" schedule was broadcast from 6 to 9 p.m. OEPBS bought KTVR on August 31, 1976 and converted it to PBS on February 1, 1977. At first, KTVR rebroadcast programming from KWSU-TV in Pullman, Washington and KSPS-TV in Spokane, Washington until OEPBS completed a transmission link to La Grande. On September 1, 1977 OEPBS took KTVR off the air for transmitter repairs, due to increasing technical problems. KTVR returned to the air on January 1, 1978, carrying OEPBS programming for the first time.

KOAB-TV in Bend began broadcasting on February 24, 1970 as KVDO-TV, an independent station licensed to Salem.[citation needed] Channel 3 struggled to compete with Portland's established independent, KPTV (channel 12), and in 1974 the station was purchased by Liberty Communications, then-owners of Eugene's ABC affiliate KEZI (channel 9). The intention was to make KVDO a full-power satellite of KEZI. KATU (channel 2), Portland's ABC affiliate, responded by taking legal action, forcing KEZI to instead operate KVDO on a limited basis. OEPBS purchased the station on February 19, 1976, and turned the station into a PBS member station, rebroadcasting OEPBS programming that was already available from KOAC and KOAP (now KOPB). A few days later on February 28, 1976, a disgruntled viewer protesting KVDO's sale to OEPBS cut guy wires, toppling the channel 3 transmitter tower.[citation needed] On September 20, 1976 KVDO signed back on the air with a new tower. On August 6, 1983, after many complaints about duplication of service to Salem-area viewers (see above), KVDO was shut down. OEPBS petitioned the FCC to move Channel 3's license and channel allocation to Bend, which had no PBS coverage; the FCC honored their request. On December 22, 1983 channel 3 signed back on the air as KOAB. The call letters were modified to KOAB-TV when KOAB-FM signed on the air January 23, 1986.

KOAC won a 1972 Peabody Award for a program called Conversations with Will Shakespeare and Certain of His Friends.[2] KEPB-TV in Eugene began operation on February 27, 1990 as Eugene's first public television station, rebroadcasting OPB programming clearer than KOAC's rimshot signal from Corvallis.[citation needed]

In 2007, OPB Radio added World Have Your Say (WHYS) to its schedule, with its listeners becoming the show's most numerous contributors from the United States and second worldwide in number only to Nigeria.[5] According to WHYS host Ros Atkins, a "significant number of listeners [disliked the] 'tone' and 'production'" of the show, resulting in the removal of the show from OPB's schedule after three years.[5]

On June 7, 2014, the Northwest Chapter of the National Academy of Television Arts and Sciences held their 51st Regional Emmy Awards: OPB and its staff won 10 Emmys:[9]

OPB's first digital channel was OPB CREATE (an affiliate of the Create network), announced in January 2006; its availability was limited to certain Comcast digital cable customers and on Clear Creek Television in Oregon City.[10]

In December 2008, in anticipation of the original February 18, 2009 deadline for switching to all-digital broadcasting, OPB announced the launch of three digital subchannels: OPB, which would air OPB programming with an "improved picture for viewers with traditional sets", OPB HD, airing programming in "high definition with the highest-quality picture and sound", and OPB Plus, which offered "more choices in viewing times and added programs in news, public affairs and lifestyle."[11]

After the analog television shutdown:[13][14]

Through the use of PSIP, digital television receivers display virtual channels for each OPB station corresponding to their previous analog channel numbers.

Oregon Public Broadcasting maintains several low-powered repeaters that rebroadcast its television programming throughout the state. A few of these repeaters are not owned by OPB.

There are also two repeaters in Washington: K31IR-D in Grays River, and K28IH-D in Longview.

Since the spring of 2009, OPB has operated jazz radio station KMHD; the station is owned by Mount Hood Community College, but operates out of OPB's studio facilities in Portland.