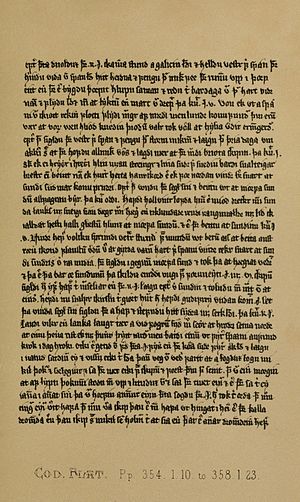 An example of a page from the Orkneyinga saga, as it appears in the 14th century Flatey Book.

The Orkneyinga saga (also called the History of the Earls of Orkney) is a historical narrative of the history of the Orkney Islands, from their capture by the Norwegian king in the ninth century onwards until about 1200.[1] The saga has "no parallel in the social and literary record of Scotland".[2]

The Norse saga was written around 1230 (three centuries after some of the events they record) by an unknown Icelandic author and, as was generally the case with Icelandic language writing of this period, the saga is as much a fictional story as a historic document. It is thought to have been compiled from a number of sources, combining oral legends with historical facts to tell the lives of the earls of Orkney and how they came about their earldom.

After three chapters dealing with the mythical ancestry of the later earls, the saga's adventurous account begins with the semi-mythical tales of the conquest of Orkney by Harald Fairhair, the King of Norway before moving on to more factual matters.[3]

The first three chapters cover text that provide the supposed origins for the Swedish and Norwegian (January/February) torsmånad after Thorri and (February/March) göjemånad after Gói. In modern Icelandic Gói is referred to as Góa and is also used as a female name.[4] The first two chapters also give a unique explanation for how Norway came to be named as such, involving Thorri's sons Nór and Gór and their division of the land.[5]

Throughout the story, a number of characters who are both historical and legendary are introduced: Sigurd the Powerful, Hákon Paulsson, Sigurd the Stout, Ragnvald, Earl of Møre, Earl Magnus Erlendsson later styled the saint, Ragnvald Kali Kolsson and Harald Maddadsson. One or two of these characters are still part of Orcadian folklore today. There are examples of obviously fictional elements – such as Earl Sigurd's raven banner, the poisoned shirt of Earl Harald, and elements of the Hrolf Ganger saga. The saga shows how one would typically become an earl in medieval Orkney, and the problems that would ensue if more than one person shared the earldom. (for example, chapters 12–19: Sigurd Hlodvisson's sons)[6]

Earl Sigurd Hlodvisson (also known as Sigurd the Stout) had four sons: Sumarlidi, Brusi, Einar Wry-Mouth, and Thorfinn (the youngest) by the daughter of King Malcolm II of Scotland. When Sigurd was killed, the earldom was divided among Sumarlidi, Brusi, and Einar (Thorfinn was only 5 years old at the time). Soon after, Sumarlidi died and his share was given to Thorfinn.

Einar was a ruthless earl, and imposed harsh taxes which severely hurt the farmers. A farmer's son, Thorkel, pleads to Earl Einar to lower the taxes, but to no avail. Fearing that his pleas were only making things worse, Thorkel flees to Caithness and fosters Thorfinn for some time. When Thorfinn is old enough to claim his share of the islands, he sends Thorkel to gather tributes at the islands. While there, however, Einar, who blames Thorkel for the uprising of the farmers, tries to kill him.

Thorfinn and Thorkel sail to Norway to visit and gain the friendship of King Olaf. Upon their return, Earl Brusi attempts to reconcile Thorkel and Einar by having them throw feasts for one another. At the first feast, Thorkel learns that Einar plans to ambush him. In response to this news, Thorkel kills Einar and flees to King Olaf II of Norway, who is pleased to hear that Einar is dead.

After Einar is killed, Brusi takes over his share, making him hold 2/3 of the earldom. Thorfinn demands to split claim of the islands with Brusi so that they each control half, but Brusi refuses. Knowing that Thorfinn has more power and can easily overtake him, Brusi visits King Olaf to try to gain his support in helping him maintain his control over his share. King Olaf points out that the islands were originally a fiefdom and actually belong to him, but lets Brusi continue to control his share as long as he serves him. Essentially, Brusi has surrendered his earldom to King Olaf.

When Thorfinn hears that Brusi has gone to appeal to King Olaf, he decides to do the same. While there, King Olaf gets Thorfinn to also surrender his share to him. Olaf then proclaims that Brusi and Thorfinn will each have 1/3 of the islands in fee, and Einar's share will stay in Olaf's possession.

In chapter 85 of the saga,[7] while spending a summer with King Igni in Norway, Earl Rognvald was convinced by Eindridi the Young, who had just returned from time as a mercenary in Constantinople, to visit the Holy Land. Other landowners also encouraged the Earl to make the pilgrimage and agreed to go with him, and preparations began for the trip. It was agreed that Rognvald should have the most ornate ship. Rognvald returned to Orkney (after stopping in Shetland for a time) for two years as the preparations continued.

Rognvald returned to Norway to see how the landowners had prepared. He also acquired a finely decorated ship that had been built for him. Eindridi delayed the departure from Norway. When the party finally left Norway, they discovered that Eindridi also had an extravagantly ornate ship built for him, going against his promise. That ship was smashed when it reached Shetland. The expedition spent the winter in Orkney, and there was much unrest between the Norwegians and Orcadians over trade and women. Earl Rognvald personally paid compensation for these incidents.

In the summer (chapter 86), the party left Orkney and sailed to France and the seaport of Narbonne. The Queen of Narbonne, Ermingerd, invited Rognvald to a feast. The two fell in love, and the Earl is encouraged to settle down in Narbonne and marry Ermingerd. Rognvald declines so that he can complete his pilgrimage but promises to return on his way back.

The expedition moves on to Galicia, where the natives were oppressed by a foreign chieftain named Godfrey. The men resolve to attack the chieftain's castle by starting huge fires on the walls to weaken the mortar and break down the walls. The plan is successful but Eindridi makes a deal with the Godfrey and lets him go free (chapter 87).

They continue on, Rognvald often thinking of Ermingerd, past Gibraltar. They came upon a dromond, a ship as big as a small island. In chapter 88, they attack the dromond, entering the ship through a hole they made in the hull. Every man on board was killed except for a tall man the pilgrims assumed was the leader. They attempt to sell the man in the land of the Saracens. Since no one would buy him, Rognvald let him go free.

The expedition moved on to Crete, then Akko, where many men died of a disease, then on to Jerusalem, where the remaining men toured the sacred places of the Holy Land. They began the return journey and the pilgrims ended up in Imbolum,[8] then Constantinople where they were received well by the Emperor (chapter 89). After Constantinople, they sail on to Durazzo in Bulgaria (now in Albania) and then to Apulia at the "heel" of Italy. They disembark, obtain horses, and ride to Rome and then on to Denmark. From there they sail on to Norway. From there, the Earl got passage back to Orkney in a merchant ship (chapter 90). At some point Eindridi left the group, and he returned to Norway several years after Rognvald (chapter 89).