Oslo City Hall (Norwegian: Oslo rådhus) houses the city council, city administration, and art studios and galleries. The construction started in 1931, but was paused by the outbreak of World War II, before the official inauguration in 1950. Its characteristic architecture, artworks and the Nobel Peace Prize ceremony, held on 10 December, makes it one of Oslo's most famous buildings. It was designed by Arnstein Arneberg and Magnus Poulsson. The roof of the eastern tower has a 49-bell carillon which plays every hour. It is situated in Pipervika in central downtown Oslo. The area was completely renovated and rebuilt to make room for the new city hall, back in the late 1920s. In June 2005 it was named Oslo's "Structure of the Century", with 30.4% of the votes.

In early Middle Ages, it looks like different halls in Oslo had the City Hall status from time to time. Right where Oslo Market is located today, the Early Oslo City Hall was built. From the sources we know that the old Oslo City Hall had an open wine cellar for public use. Norwegian Medieval historian Tore Vigerus says the following is in his book, Norske Rigs-Registranter III:

The initial plans for a new city hall in Pipervika was revealed in 1915 by Hieronyhmus Heyerdahl. In September 1931, the first stone was laid by King Haakon VII, and the construction started in 1933. The main structure of the building was completed in November 1936. The German invasion of Norway in 1940 caused construction to stop, and it was not resumed until 1947. The building was finally inaugurated on 15 May 1950, coinciding with Oslo's nonacentennial. 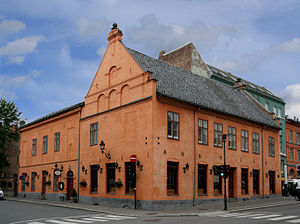 The building was Christiania’s city hall between 1641 and 1733. It was sold to the private sector because of decay, and the city took over Rådhusgata 7 which became the city’s new city hall. The Supreme Court had stayed here between 1815 and 1846. In the 1850s, the building got a side wing, which was operated as a restaurant. The restaurant moved into the main wing in 1926. After the fire in 1996, the old restaurant interior from 1926 - designed by architects Carl Berner and Hagbart Berner was recreated.

The city's first town hall was built under the leadership of Chief Executive Lauritz Hansen with support from the king, who gave a contribution of 1,000 thalers for construction work. The City Hall was the office for city officials and gathering place for the bourgeoisie. Management scheme for the cities of Denmark and Norway was established by royal decree of 1619 the township Agency. Christiania was ruled by two mayors and twelve councilors appointed by the lord's at Akershus Fortress. The administration consisted of a town clerk to do office work and a city recorder to arrange for police functions and administration of justice, both with officers. In the vaulted cellars were local arrest and imprisonment of convicted criminals. Democracy did not exist, but in time was chosen takserborgere to help skatteutligningen, and this selection was the beginning of a citizen representation. All citizens could attend the town hall Thomas Fair Day 21 December to hear the annual reading of the privilege.

After the monarchy was introduced was the administration a stronger stamp of official control. Sivile Mestere and councilors were now appointed directly by the king and got fixed income. From 1665 the title was the oldest mayor's president, chief officers and the number was reduced to six. In 1685 the number was cut down further to two, who got a raise of the savings funds. Thus disappeared the Council's role as a delicate rendering heater assembly, and the city bureaucracy tease øvrighet of the President, the mayor and two councilors were collectively known as the magistrate. Eventually, the administration supplemented by auction Director, Fire Master, Harbour Master, state conductor and water inspector. Only in 1730 did the city a real citizen representation, "the twelve eligerede Mænd", in the beginning only advisory to the magistrate. But the twelve were able to gather in the city's first town hall before it was vacated and sold.

When the town hall was built, there were no major hall in the city, and the building did so in the first period rooms for parties and theatrical performances, and after the Great Fire in 1686, it was also used for worship services. In the basement there was a time taproom. At the beginning of the 1700s the farm was in deteriorating condition, and in 1739 it was sold at auction to the general Patroclus Rømelings widow, who put it in condition. In 1785 it was sold to the Masonic Lodge St. Olai. Through the 1800s the farm had different private owners.

In 1856 it was sold to restaurateur Matheus Helseth, who opened the restaurant on the ground floor. Technical Association (later the Polytechnic Society), used a meeting room in the yard, so long as it went under the name "technique." In 1891 it was again masonic lodge, and meeting room 2 floor still has the decor that gave the Masons, with Greek columns and the "brotherly ties" on the walls. In 1940, Oslo owner, but the three remaining frimurerlogene leased premises until 1960, when they moved out for good, and into newly built premises in the Masonic stamhus Lower Vollgate No. 19 1. March 1983 new owners could open the doors of the restaurant "The Old City Hall" in the newly furnished rooms. 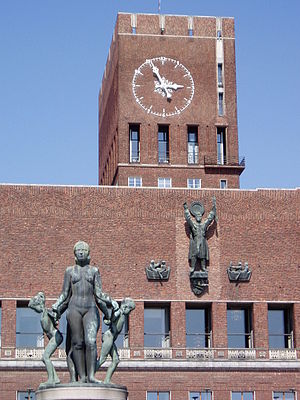 From 1997, the Theatre Museum located in building 2 floor and attic. Theatre Museum joined with the Oslo City Museum and Museum of Intercultural 1 January 2006 and became a division of Foundation Oslo Museum. Oslo Museum moved parts of the exhibition about the history of the theater to the City Museum at Frogner Manor in 2008 and opened rather than a historical exhibition of Christian IV's city Christiania (Quadrature) 1624-1850. The museum's lease with the City of Oslo ceased for economic reasons at the end of 2010, and it is uncertain what the municipality will use the former premises of the museum. 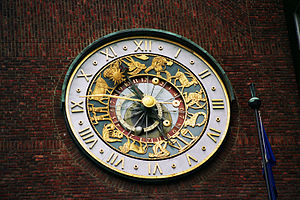 The astronomical clock on the northern side of the city hall

In 1915 launched the recently retired mayor of Christiania, Hieronymus Heyerdahl, the idea of a town hall in Pipervika, where it is today. The entire 1944 draft came in the first of two contests below. In 1918, the existence of the jury's final decision, and Arnstein Arneberg and Magnus Poulsson were designated as winners, with a project inspired by the Stockholm City Hall. Continued lack of money and bad times made the realization had to wait, and in the meantime changed the architects of the project several times. In 1930 they laid out its final proposals, now being changed under the influence of functionalist ideas. The most striking change from the earlier proposals were the two major office towers. In September 1931 the foundation stone laid down by King Haakon VII and Crown Prince Olav present, before the construction started in February 1933. In parallel with construction work, the old suburban houses swept away from the bay ("sanitized") to make room. Also, the old amusement park Tivoli had to give way to an entirely new plan that provided land for sale to the entry of new business houses, a substantial basis for the financing of City Hall. In November 1936 was the structural finishes, molded in reinforced concrete and covered with hand-beaten bricks in large format. Some office floors could be used before the outbreak of war in 1940. After a break during the war work was resumed, and occupied the office floors could happen in 1947, while work on the decorations were completed. 15. May 1950 City Hall officially opened in conjunction with the celebration of the city's 900 anniversary

On December 10 (anniversary of Alfred Nobel's death) each year, Oslo City Hall hosts the Nobel Peace Prize ceremony in which the annual laureate gives his or her lecture and is awarded the medal and diploma. A podium for the laureate and the Nobel Committee is erected in the far end of the hall for each ceremony. The Norwegian Royal Family and Prime Minister are attendants.