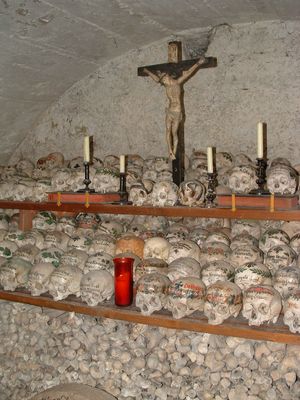 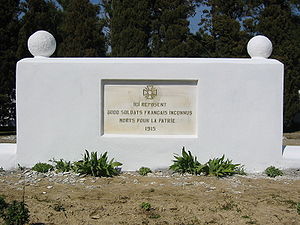 Ossuary at the Gallipoli World War I battlefield, containing the remains of 3000 unidentified French soldiers.

An ossuary is a chest, box, building, well, or site made to serve as the final resting place of human skeletal remains. They are frequently used where burial space is scarce. A body is first buried in a temporary grave, then after some years the skeletal remains are removed and placed in an ossuary. The greatly reduced space taken up by an ossuary means that it is possible to store the remains of many more people in a single tomb than if the original coffins were left as is.

In Persia, the Zoroastrians used a deep well for this function from the earliest times (c. 3,000 years ago) and called it astudan (literally, "the place for the bones"). There are many rituals and regulations in the Zoroastrian faith concerning the astudans. Among the pre-7th-century Sogdians[1] in the region of central Asia, the name for an ossuary was tanbar. 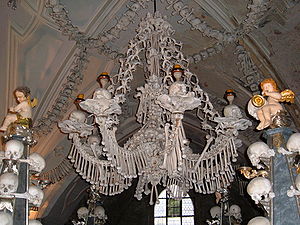 A chandelier of Sedlec Ossuary, Czech Republic, made of skulls and bones. 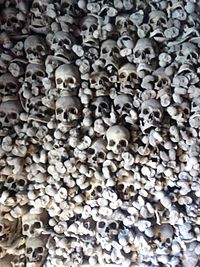 Many examples of ossuaries are found within Europe, including the Santa Maria della Concezione dei Cappuccini in Rome, Italy; in south Italy the Martyrs of Otranto; the Fontanelle cemetery and Purgatorio ad Arco, Naples and many others; the San Bernardino alle Ossa in Milan, Italy; the Sedlec Ossuary in the Czech Republic; the Skull Chapel in Czermna in Lower Silesia, Poland; and Capela dos Ossos ("Chapel of Bones") in Évora, Portugal. The village of Wamba in the province of Valladolid, Spain, has an impressive ossuary of over a thousand skulls inside the local church, dating from between the 12th and 18th centuries. A more recent example is the Douaumont ossuary in France, which contains the remains of more than 130,000 French and German soldiers that fell at the Battle of Verdun during World War I. The Catacombs of Paris represents another famous ossuary.

The catacombs beneath the Monastery of San Francisco in Lima, Peru, also contains an ossuary. 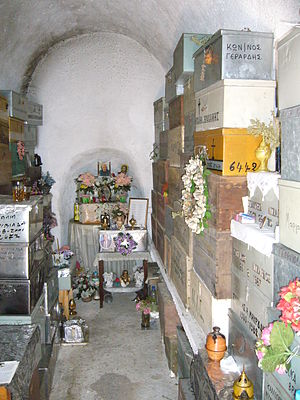 Contemporary Greek ossuaries made of wood and metal. 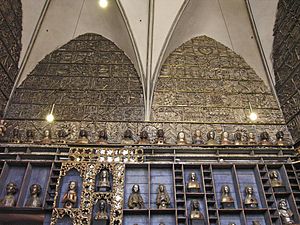 The Ursulakammer in the Basilica of St. Ursula in Cologne, where in the 17th century the largest mosaic in human bones ever was created, that covers the four walls of the room.[2]

The use of ossuaries is a longstanding tradition in the Orthodox Church. The remains of an Orthodox Christian are treated with special reverence, in conformity with the biblical teaching that the body of a believer is a "temple of the Holy Spirit" (I Corinthians, etc.), having been sanctified and transfigured by Baptism, Holy Communion and the participation in the mystical life of the Church.[3] In Orthodox monasteries, when one of the brethren dies, his remains are buried (for details, see Christian burial) for one to three years, and then disinterred, cleaned and gathered into the monastery's charnel house. If there is reason to believe that the departed is a saint, the remains may be placed in a reliquary; otherwise the bones are usually mingled together (skulls together in one place, long bones in another, etc.). The remains of an abbot may be placed in a separate ossuary made out of wood or metal.

The use of ossuaries is also found among the laity in the Greek Orthodox Church. The departed will be buried for one to three years and then, often on the anniversary of death, the family will gather with the parish priest and celebrate a parastas (memorial service), after which the remains are disinterred, washed with wine, perfumed, and placed in a small ossuary of wood or metal, inscribed with the name of the departed, and placed in a room, often in or near the church, which is dedicated to this purpose.

During the time of the Second Temple, Jewish burial customs included primary burials in burial caves, followed by secondary burials in ossuaries placed in smaller niches of the burial caves. Some of the limestone ossuaries that have been discovered, particularly around the Jerusalem area, include intricate geometrical patterns and inscriptions identifying the deceased. Among the best-known Jewish ossuaries of this period are: an ossuary inscribed 'Simon the Temple builder' in the collection of the Israel Museum, another inscribed 'Elisheba wife of Tarfon', one inscribed 'Yehohanan ben Hagkol' that contained an iron nail in a heel bone suggesting crucifixion, another inscribed 'James son of Joseph, brother of Jesus', the authenticity of which is opposed by some and strongly supported by others, and ten ossuaries recovered from the Talpiot Tomb in 1980, several of which are reported to have names from the New Testament.

During the Second Temple period, Jewish sages debated whether the occasion of the gathering of a parent's bones for a secondary burial was a day of sorrow or rejoicing; it was resolved that it was a day of fasting in the morning and feasting in the afternoon. The custom of secondary burial in ossuaries did not persist among Jews past the Second Temple period nor appear to exist among Jews outside the land of Israel. 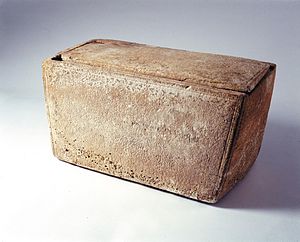