From Infogalactic: the planetary knowledge core
Jump to: navigation, search
This article is about the biochemist and Nobel laureate. For the World Zionist Organization president, see Otto Warburg (botanist).

Otto Heinrich Warburg (/ˈvɑːrbʊərɡ/; October 8, 1883 – August 1, 1970), son of physicist Emil Warburg, was a German physiologist, medical doctor and Nobel laureate. He served as an officer in the elite Uhlan (cavalry regiment) during the First World War, and was awarded the Iron Cross (1st Class) for bravery. Warburg is considered one of the 20th century's leading biochemists.[2] He was the sole recipient of the Nobel Prize in Physiology in 1931.[1] In total, he was nominated for the award 47 times over the course of his career.[3]

Warburg's father, Emil Warburg, was a member of the illustrious Warburg family of Altona, and had converted to Christianity reportedly after a disagreement with his Conservative Jewish parents. Emil was also president of the Physikalische Reichsanstalt, Wirklicher Geheimer Oberregierungsrat (True Senior Privy Counselor). His mother was the daughter of a Protestant family of bankers and civil servants from Baden.

Warburg studied chemistry under the famous Emil Fischer, and earned his Doctor of Chemistry in Berlin in 1906. He then studied under Ludolf von Krehl, and earned the degree of Doctor of Medicine in Heidelberg in 1911.

Between 1908 and 1914, Warburg was affiliated with the Naples Marine Biological Station, in Naples, Italy, where he conducted research. In later years, he would return for visits, and maintained a lifelong friendship with the family of the station's director, Anton Dohrn.

A lifelong equestrian, he served as an officer in the elite Uhlans (cavalry) on the front during the First World War, where he won the Iron Cross. Warburg later credited this experience with affording him invaluable insights into "real life" outside the confines of academia. Towards the end of the war, when the outcome was unmistakable, Albert Einstein, who had been a friend of Warburg's father Emil, wrote Warburg at the behest of friends, asking him to leave the army and return to academia, since it would be a tragedy for the world to lose his talents. Einstein and Warburg later became friends, and Einstein's work in physics had great influence on Otto's biochemical research.[citation needed] 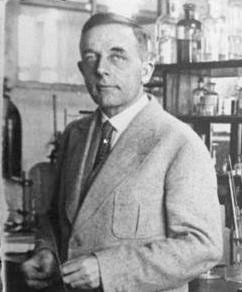 While working at the Marine Biological Station, Warburg performed research on oxygen consumption in sea urchin eggs after fertilization, and proved that upon fertilization, the rate of respiration increases by as much as sixfold. His experiments also proved iron is essential for the development of the larval stage.

Warburg investigated the metabolism of tumors and the respiration of cells, particularly cancer cells, and in 1931 was awarded the Nobel Prize in Physiology for his "discovery of the nature and mode of action of the respiratory enzyme."[1] The award came after receiving 46 nominations over a period of nine years beginning in 1923, 13 of which were submitted in 1931, the year he won the prize.[3]

Survival under the Nazis

When the Nazis came to power, people of Jewish descent were forced from their professional positions. However, the Nazis were hypocritical in their implementation of this policy, looking the other way in some cases where they could use Jewish scientists to advance the technology of the Reich. Despite having a Jewish father, Warburg was spared. By this time Warburg was studying cancer. While banned from teaching he was allowed to carry on his research.[4]

In 1935, Hitler had a polyp removed from his vocal cords. It is believed that afterwards, he feared that could develop cancer, which may have allowed Warburg to survive. In 1941, Warburg lost his post briefly, when he made critical remarks about the regime but a few weeks later a personal order from Hitler's Chancellery ordered him to resume work on his cancer research. Göring also arranged for him to be classified as one-quarter Jewish.[4]

According to the Reichsbürgergesetz from 1935 (cf. Nuremberg Laws) Warburg was considered by the Nazis a half-Jew (Halbjude) resp. Mischling and in September 1942 he issued an official request for equal status ("Gleichstellung") with Germans which was granted.[5]

It is believed that Warburg was so totally dedicated to his work that he was prepared to not only stay in Germany but also accept the Nazi treatment of his Jewish colleagues and his Jewish relatives.[6] This was despite him having received an offer from the Rockefeller Foundation to continue to fund his work if he emigrated. After the end of the Second World War he made inquires about moving to the United States of America, but his approach was turned down.

In 1943 Warburg relocated his laboratory to the village of Liebenburg on the outskirts of Berlin to avoid ongoing air attacks.

Nomination for a second Nobel Prize

In 1944, Warburg was nominated for a second Nobel Prize in Physiology by Albert Szent-Györgyi, for his work on nicotinamide, the mechanism and enzymes involved in fermentation, and the discovery of flavin (in yellow enzymes).[7][8] Some sources reported he was selected to receive the award that year, but was prevented from receiving it by Adolf Hitler’s regime, which had issued a decree in 1937 that forbade Germans from accepting Nobel Prizes.[9][10] According to the Nobel Foundation, this rumor is not true; although he was considered a worthwhile candidate, he was not selected for the prize.[7]

Three scientists who worked in Warburg's lab, including Sir Hans Adolf Krebs, went on to win the Nobel Prize. Among other discoveries, Krebs is credited with the identification of the citric acid cycle (or Szentgyörgyi-Krebs cycle).

Warburg’s combined work in plant physiology, cell metabolism and oncology made him an integral figure in the later development of systems biology.[11] He worked with Dean Burk in photosynthesis to discover the I-quantum reaction that splits the CO2, activated by the respiration.[12]

Warburg hypothesized that cancer growth is caused by tumor cells mainly generating energy (as e.g. adenosine triphosphate / ATP) by anaerobic breakdown of glucose (known as fermentation, or anaerobic respiration). This is in contrast to healthy cells, which mainly generate energy from oxidative breakdown of pyruvate. Pyruvate is an end product of glycolysis, and is oxidized within the mitochondria. Hence, and according to Warburg, cancer should be interpreted as a mitochondrial dysfunction.

Cancer, above all other diseases, has countless secondary causes. But, even for cancer, there is only one prime cause. Summarized in a few words, the prime cause of cancer is the replacement of the respiration of oxygen in normal body cells by a fermentation of sugar.

Warburg continued to develop the hypothesis experimentally, and held several prominent lectures outlining the theory and the data.[14]

Today, mutations in oncogenes and tumor suppressor genes are thought to be responsible for malignant transformation, and the metabolic changes are considered to be a result of these mutations rather than a cause.[15] 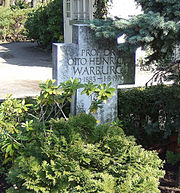 Otto Warburg edited and had much of his original work published in The Metabolism of Tumours (tr. 1931) and wrote New Methods of Cell Physiology (1962). An unabashed anglophile, Otto Warburg was thrilled when Oxford University awarded him an honorary doctorate.[citation needed] He was awarded the Order Pour le Mérite in 1952, and was known to tell other universities not to bother with honorary doctorates, and to ask officials to mail him medals he had been awarded so as to avoid a ceremony that would separate him from his beloved laboratory.[citation needed]

When frustrated by the lack of acceptance of his ideas, Warburg was known to quote an aphorism he attributed to Max Planck: Science progresses not because scientists change their minds, but rather because scientists attached to erroneous views die, and are replaced.[16][not in citation given][verify]

Seemingly utterly convinced of the accuracy of his conclusions, Warburg expressed dismay at the "continual discovery of cancer agents and cancer viruses" which he expected to "hinder necessary preventative measures and thereby become responsible for cancer cases".[14]

In his later years, Warburg was convinced that illness resulted from pollution; this caused him to become a bit of a health advocate. He insisted on eating bread made from wheat grown organically on land that belonged to him. When he visited restaurants, he often made arrangements to pay the full price for a cup of tea, but to only be served boiling water, from which he would make tea with a tea bag he had brought with him. He was also known to go to significant lengths to obtain organic butter, the quality of which he trusted.[citation needed]

When Josef Issels was tried and convicted for promoting the Issels treatment, an ineffective regime claimed to treat cancer, Warburg offered to testify on Issels' behalf at his appeal to the German Supreme Court. All of Issels' convictions were overturned.[17]

The Otto Warburg Medal is intended to commemorate Warburg's outstanding achievements. It has been awarded by the German Society for Biochemistry and Molecular Biology (Gesellschaft für Biochemie und Molekularbiologie) since 1963. The prize honors and encourages pioneering achievements in fundamental biochemical and molecular biological research. The Otto Warburg Medal is regarded as the highest award for biochemists and molecular biologists in Germany. It has been endowed with prize money, sponsored by the publishing company Elsevier/BBA.[18]