From Infogalactic: the planetary knowledge core
Jump to: navigation, search
For other people named Otto of Bavaria, see Otto of Bavaria (disambiguation).

Otto (German: Otto Wilhelm Luitpold Adalbert Waldemar von Wittelsbach; 27 April 1848 – 11 October 1916), was King of Bavaria from 1886 to 1913. However, he never actively reigned due to severe mental illness; his uncle, Luitpold, and cousin, Ludwig, served as regents. Ludwig deposed him in 1913 a day after the legislature passed a law allowing him to do so, becoming king in his own right.

He was the son of Maximilian II and his wife, Marie of Prussia, and younger brother of Ludwig II. King Otto of Bavaria is not to be confused with King Otto of Greece, who was his uncle and godfather.

Prince Otto was born on 27 April 1848, two months premature, in the Munich Residenz. His parents were King Maximilian II of Bavaria and Marie of Prussia. His uncle King Otto I of Greece served as his godfather.

Otto had an older brother, the Crown Prince Ludwig. They spent most of their childhood with servants and teachers at Hohenschwangau Castle. Their parents were distant and formal and had little time for them and Ludwig had a tendency to lord it over Otto. Their parents were aware that Otto and Ludwig didn't like them much, but they made no effort to win the children over. Their parents were at such a loss about what to say to Otto and Ludwig that they often ignored and even avoided them.[1] Their mother did take an interest in what the brothers wore: she ordered that Ludwig should always be dressed in blue while Otto should always wear red. Their father was strict with the brothers, particularly Ludwig, the heir to the throne. Between 1853 and 1863, the brothers spent their summer holidays at the Royal Villa in Berchtesgaden, which had been specially built for their father.[2][3]

On 10 March 1864, Otto's father died and his brother Ludwig succeeded as King of Bavaria. Between 18 June and 15 July 1864, the two brothers received state visits by the emperors of Austria and Russia. 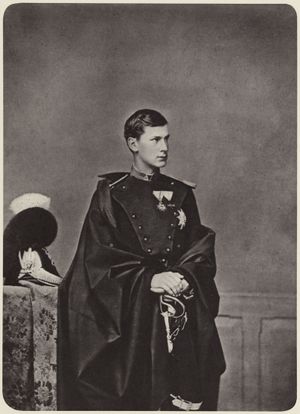 Otto I at a young age

Otto was promoted to Captain on 27 April 1866 and entered active military service in the Royal Bavarian Infantry Guards. In 1868, he became a member of the Order of St. George, the house order of the House of Wittelsbach. He participated in the Austro-Prussian War of 1866 and as colonel in the Franco-Prussian War of 1870–1871. His experiences on the battlefield traumatized him and caused him to suffer from depression and insomnia.[4] When Wilhelm I was proclaimed German Emperor on 18 January 1871 at the Palace of Versailles, Prince Otto and his uncle Luitpold represented King Ludwig II, who refused to participate.[5][6] Otto then criticized the celebration as ostentatious and heartless in a letter to his brother. Ludwig and Otto despised their ambitious Prussian relatives and cordially disliked their Prussian mother, so they were appalled by the creation of the new German Empire. Ludwig and Otto's hostility was no secret to the Prussian government.

Otto and Ludwig were often seen together during the early years of Ludwig's reign but they became estranged over time. This was a pity because the brothers complemented each other well. Ludwig was shy and introverted and eventually became a recluse while Otto was cheerful, outgoing and extroverted until the Franco-Prussian War. In 1868, Otto received the Royal Order of Saint George for the Defense of the Immaculate Conception, the house order of the House of Wittelsbach. In 1869, he joined the Order of the Holy Sepulchre, on the initiative of Cardinal Karl-August von Reisach.[7]

After the Franco-Prussian War, Otto became very depressed and anxious, which worried his family. Otto had spells where he slept poorly for days and acted out followed by periods of time where he was perfectly normal and lucid. His illness progressively grew worse. Ludwig was horrified because he'd been counting on Otto to marry and have a son who could eventually inherit the throne. Otto was placed under medical supervision and reports about his condition were sent by spies to the Prussian Chancellor Otto von Bismarck. Doctors reported that Otto was mentally ill in January 1872. From 1873, he was held in isolation in the southern pavilion of Nymphenburg Palace. His attending physician was Dr. Bernhard von Gudden. Dr. von Gudden later diagnosed Otto's brother Ludwig as mentally ill without bothering to examine him and without asking him a single question, which raises questions about his competence and his motives. Both Ludwig and Otto despised Prussia, while their uncle Luitpold and Dr. von Gudden supported Prussia's rise to dominance. Some contemporaries believed that Dr. von Gudden's diagnoses of Otto and Ludwig were motivated by political considerations and that more could and should have been done to help and treat Otto. Some contemporaries also believed that Bismarck did not want Ludwig or Otto to remain in power and decided to replace the brothers with their malleable uncle Luitpold.[8]

During Corpus Christi Mass 1875 in the Frauenkirche in Munich, Otto – who had not attended the church service – rushed into the church wearing hunting clothes and fell on his knees before the celebrant, Archbishop Gregor von Scherr, to ask forgiveness for his sins. The High Mass was interrupted and the prince did not resist when he was led away by two church ministers. Otto was then moved to Schleissheim Palace and was effectively held prisoner there, much to his dismay. Dr. von Gudden made no effort to treat him; it is possible that Otto was heavily drugged. Otto's last public appearance was his presence at the side of his brother at the King's parade on 22 August 1875 at the Marsfeld in Munich. From 1 June 1876, he stayed for a few weeks in the castle at Ludwigsthal in the Bavarian Forest. In the spring of 1880, his condition worsened. In 1883, he was confined under medical supervision in Fürstenried Palace near Munich, where he would remain for the rest of his life. This palace had been specially converted for his confinement. King Ludwig II occasionally visited him at night, and ordered that no violence be used against him.

Otto became King after Ludwig was deposed, but he was never truly allowed to reign. In 1886, the senior royal medical officer wrote a statement declaring that Otto was severely mentally ill.[9] It has been claimed that Ludwig had a schizotypal personality disorder[citation needed], and that Otto suffered from schizophrenia.[10] It has also been persuasively argued that Otto's problems were the result of contracting syphilis, which would also account for his physical problems, particularly the paralysis he suffered from in later years.[11] 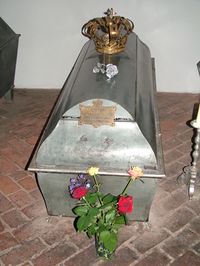 Sarcophagus of King Otto I in the St. Michael's Church in Munich

On 10 June 1886, the Bavarian cabinet declared King Ludwig II unable to rule and appointed his uncle Luitpold as Prince Regent. Ludwig died only three days later, under unexplained circumstances. This meant that Otto became King on 13 June 1886. He was however, unable to rule. The official explanation was that the King is melancholic. The proclamation of his inauguration was read to him at Fürstenried castle the next day, but he failed to understand it.[citation needed]

End of reign and death

Luitpold kept his role as Prince Regent until he died in 1912 and was succeeded by his son Ludwig, who was Otto's first cousin. By then, it had been obvious for some time that Otto would never emerge from seclusion or be mentally capable of actively reigning. Almost as soon as Ludwig became regent, elements in the press and larger society clamoured for Ludwig to become king in his own right.

Accordingly, on 4 November 1913 the constitution of Bavaria was amended on 4 November 1913 to include a clause specifying that if a regency for reasons of incapacity lasted for ten years with no expectation that the King would ever be able to reign, the Regent could end the regency, depose the King and assume the crown himself with the assent of the legislature. The following day, Prince Regent Ludwig ended the regency and proclaimed his own reign as Ludwig III. The parliament assented on 6 November, and Ludwig III took the constitutional oath on 8 November. King Otto was permitted to retain his title and honours for life.

File:Body of King Otto I of Bavaria.jpg
Postcard photograph from 1916 of King Otto's body in repose.

Otto died unexpectedly on 11 October 1916, due to a volvulus (an obstruction of the bowel). His remains were interred in the crypt of the Michaelskirche in Munich. Bavarian tradition called for the heart of the king to be placed in a silver urn and sent to the Gnadenkapelle (Chapel of the Miraculous Image) in Altötting, beside those of his brother, father and grandfather.

Otto was portrayed by the actor Klaus Kinski in the movie Ludwig II: Glanz und Ende eines Königs. This role was the first time Kinski drew attention in Germany and internationally.