Ottokar I of Bohemia

Přemysl Ottokar's parents were Vladislaus II, Duke of Bohemia, and Judith of Thuringia. His early years were passed amid the anarchy which prevailed everywhere in the country. After several struggles in which he took part, he was recognized as ruler of Bohemia by Holy Roman Emperor Henry VI in 1192. He was, however, soon overthrown for joining a conspiracy of German princes to bring down the Hohenstaufen dynasty. In 1197 Ottokar forced his brother, Duke Vladislaus III Henry, to abandon Bohemia to him and to content himself with Moravia.

Taking advantage of the German civil war between the Hohenstaufen claimant Philip of Swabia and the Welf candidate Otto IV, Ottokar declared himself King of Bohemia. This title was supported by Philip of Swabia, who needed Czech military support against Otto (1198).

In 1199 Ottokar divorced his wife Adelheid of Meissen, a member of the Wettin dynasty, in order to marry Constance of Hungary, the young daughter of the Hungarian King Béla III.

In 1200 - with Otto IV in the ascendancy - Přemysl Ottokar abandoned his pact with Philip and declared for the Welf faction. Both Otto and Pope Innocent III subsequently accepted Ottokar as hereditary King of Bohemia. 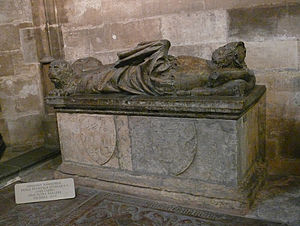 Tomb of Přemysl Ottokar I in St. Vitus Cathedral, Prague

Philip's consequent invasion of Bohemia was successful. Ottokar, having been compelled to pay a fine, again ranged himself among Philip's partisans and still later was among the supporters of the young king, Frederick II. In 1212 Frederick granted the Golden Bull of Sicily to Bohemia. This document recognised Ottokar and his heirs as Kings of Bohemia. The king was no longer subject to appointment by the Emperor and was only required to attend Diets close to the Bohemian border. Although a subject of the Holy Roman Empire, the Bohemian King was to be the leading electoral prince of the empire and to furnish all subsequent Emperors with a bodyguard of 300 knights when they went to Rome for their coronation.

Ottokar's reign was also notable for the start of German immigration into Bohemia and the growth of towns in what had until that point been forest lands. In 1226 Přemysl Ottokar went to war against Leopold VI of Austria after the latter wrecked a deal that would have seen Ottokar's daughter (Saint Agnes of Bohemia) married to Emperor Frederick II's son, Henry II of Sicily. Ottokar then planned for the same daughter to marry Henry III of England, but this was vetoed by the Emperor, who knew Henry to be an opponent of the Hohenstaufen dynasty. The widowed Emperor himself wanted to marry Agnes, but by then she did not want to play a role in an arranged marriage. With the help of the pope, Agnes entered a convent.