Our Lady of the Lake University

From Infogalactic: the planetary knowledge core
Jump to: navigation, search
Not to be confused with Our Lady of the Lake College.

Our Lady of the Lake University (OLLU) is an independent Catholic, co-ed university located in San Antonio, Texas, United States. It was founded in 1895 by the Sisters of Divine Providence, a religious institute originating in Lorraine, France, during the 18th century. The Texas chapter of the institute still sponsors the university. Our Lady of the Lake University was the first San Antonio institution of higher education to receive regional accreditation, and its Worden School of Social Service is the oldest school of Social Work in Texas.

Our Lady of the Lake University was the first San Antonio institution of higher education to receive regional accreditation. It has been accredited by the Commission on Colleges of the Southern Association of Colleges and Schools since 1923. In 1927 it became the third Texas school to be approved by the American Association of Universities.

As part of its mission to provide education to those with limited access, the University introduced the Weekend College concept at the San Antonio campus in 1978. OLLU began offering "weekend degree" programs in Houston in 1986.

University president Tessa Martinez Pollack resigned on March 1, 2013. She began her presidency in 2002. Her resignation follows what the San Antonio Express-News characterizes as "months of tumult in which students and faculty protested Pollack's decision to eliminate a dozen degree majors, including religious studies and Mexican American studies, which some considered at the core of the Catholic school's mission and identity."[2]

Former member of the University's Board of Trustees, Sister Jane Ann Slater CDP was named Interim President until a permanent replacement can be found.

On May 6, 2008, a fire was reported on the campus at 7:44 p.m. CDT. The fire affected all four floors of the main building. The fire quickly changed from a three- to four-alarm fire after an hour's time with five pumper trucks battling the blaze. No injuries or deaths occurred. The fire consumed the roof and one spire had collapsed. Much of the damage to the building was due to the amount of water poured into the building to contain the blaze. While the firefighters struggled with the fourth floor, some of the University's IT staff went in and protected the servers that were located on the first floor of the same building. Operations were coordinated from the Library building located across 24th Street from Main. A bomb threat the day before the fire had caused some concern that the incident was arson-related.[3] Firefighters suspect that the fire started on the fourth floor of the Main building due to an electrical short.[4]

The community quickly rallied and help raise funds to reconstruct the building and reconstruction was completed in Fall 2010 and hosted its first class since the fire in January 2011. 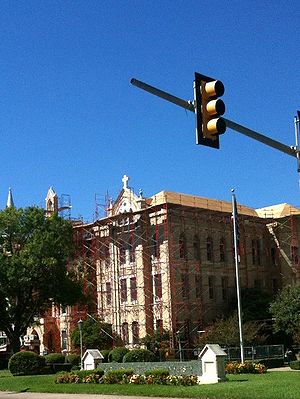 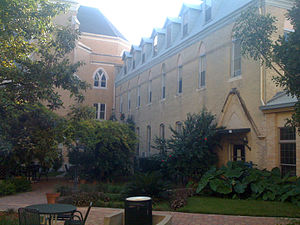 As a Catholic university sponsored by the Sisters of Divine Providence, Our Lady of the Lake University is a community whose members are committed to serve students by:

"Our Lady of the Lake University exists for the purpose of providing undergraduate and graduate programs that are rooted in the tradition of Catholic higher education and inspired by the Congregation of Divine Providence in San Antonio, Texas. OLLU realizes this purpose through the development of every student who enrolls, through the assurance of quality in every academic program, through unwavering service to the communities of which it is a part, and through the continuing strong spirituality, charism and sponsorship of the Sisters of Divine Providence."[5]