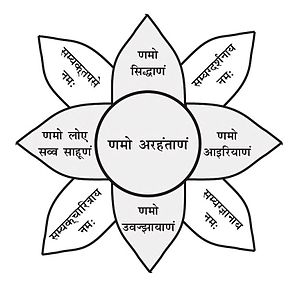 The Pañca-Parameṣṭhi (Sanskrit for "five supreme beings") in Jainism are a fivefold hierarchy of religious authorities worthy of veneration.[1][2]

The five supreme beings are:

The five initials, viz. A+A+A+U+M are taken as forming the Aum syllable.[1]

Having destroyed the four inimical varieties of karmas (ghātiyā karmas), possessed of infinite faith, happiness, knowledge and power, and housed in most auspicious body (paramaudārika śarīra), that pure soul of the World Teacher (Arhat) should be meditated on.