From Infogalactic: the planetary knowledge core
Jump to: navigation, search
For other uses, see PIF.

The Pacific Islands Forum is an inter-governmental organization that aims to enhance cooperation between the independent countries of the Pacific Ocean. It was founded in 1971 as the South Pacific Forum. In 1999, the name was changed; Pacific Islands Forum is more inclusive of the Forum's Oceania-spanning membership of both north and south Pacific island countries, including Australia. It is an official observer at the United Nations.

The mission of the Pacific Islands Forum is “to work in support of Forum member governments, to enhance the economic and social well-being of the people of the South Pacific by fostering cooperation between governments and between international agencies, and by representing the interests of Forum members in ways agreed by the Forum”. Its decisions are implemented by the Pacific Islands Forum Secretariat (PIFS), which grew out of the South Pacific Bureau for Economic Co-operation (SPEC). As well as its role in harmonising regional positions on various political and policy issues, the Forum Secretariat has technical programmes in economic development, transport and trade. The Pacific Islands Forum Secretary General is the permanent Chairman of the Council of Regional Organisations in the Pacific (CROP).[1]

Australia and New Zealand are generally larger and wealthier than the other countries that make up the rest of the forum, Australia's population is around twice that of the other 15 members combined and its economy is more than five times larger. They are significant aid donors and big markets for exports from the other countries. Military and police forces as well as civilian personnel of Forum states, chiefly Australia and New Zealand, have recently been part of regional peacekeeping and stabilization operations in other states, notably in Solomon Islands (2003–) and Nauru (2004–2009), under Forum auspices. Such regional efforts are mandated by the Biketawa Declaration, which was adopted at the 31st Summit of Pacific Islands Forum Leaders, held at Kiribati in October 2000.

In September 2011, the U.S. territories of American Samoa, Guam and the Northern Mariana Islands were granted observer status in the Pacific Islands Forum.[2]

From August 5–7, 1971, the first meeting of the South Pacific Forum was initiated by New Zealand and held in Wellington, with attendants of the following seven countries: the President of Nauru, the Prime Ministers of Western Samoa, Tonga and Fiji, the Premier of the Cook Islands, the Australian Minister for External Territories, and the Prime Minister of New Zealand. It was a private and informal discussion of a wide range of issues of common concern, concentrating on matters directly affecting the daily lives of the people of the islands of the South Pacific, devoting particular attention to trade, shipping, tourism, and education. Afterwards this meeting was held annually in member countries and areas in turn. In 1999, the 30th South Pacific Forum decided to transform into Pacific Islands Forum, with more extensive and formal way of discussion and organization. Immediately after the forum’s annual meeting at head of government level, the Post Forum Dialogue (PFD) is conducted at ministerial level with PFD development partners around the world.

In August 2008, the Forum threatened to suspend Fiji if the latter did not commit to holding a general election by March 2009.[3] Subsequently, at a special leaders' meeting of the Pacific Islands Forum, held in Papua New Guinea in January 2009, Forum leaders set a deadline of 1 May, by which date Fiji must set a date for elections before the end of the year. Fiji rejected the deadline.[4] Consequently, on May 2, Fiji was suspended indefinitely from participation in the Forum with immediate effect.[5][6] Toke Talagi, the Chair of the Pacific Islands Forum and Premier of Niue, described the suspension as "also particularly timely given the recent disturbing deterioration of the political, legal and human rights situation in Fiji since April 10, 2009".[7] He described Fiji as “a regime which displays such a total disregard for basic human rights, democracy and freedom” which he believed contravened membership of the Pacific Islands Forum.[7] Talagi emphasised, however, that Fiji had not been expelled and that it would be welcomed back into the fold when it returned to the path of "constitutional democracy, through free and fair elections".[7]

The 2009 suspension of Fiji marked the first time that a country had been suspended from the Pacific Islands Forum in the history of the then 38-year-old organization.[8]

Following the Fijian general election of 17 September 2014, the Forum lifted the suspension of Fiji on 22 October 2014.[9]

Directors of the South Pacific Bureau for Economic Co-operation 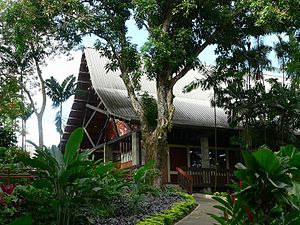 Library and archives building at the Secretariat complex in Suva, Fiji.

There are four divisions in the Pacific Islands Forum Secretariat, and each of these divisions has direct responsibility for a range of programs designed to improve the capacity of the Forum member countries and to co-ordinate action on matters of common interest:

The Pacific Island Countries Trade Agreement[15] (PICTA) aims to establish a free-trade area between 14 of the Pacific Islands Forum countries. As of 2013, it had been signed by 12 states:[16] Cook Islands, Fiji, Kiribati, Micronesia, Nauru, Niue, Papua New Guinea, Samoa, Solomon Islands, Tonga, Tuvalu, and Vanuatu. (It has not been signed by Palau or the Marshall Islands.) All of the signing states have ratified the treaty, with the exception of Micronesia. As of March 2008, six countries had announced that domestic arrangements had been made enabling them to trade under the agreement:[16] Cook Islands, Fiji, Niue, Samoa, Solomon Islands,[17] Vanuatu.[18]

After entry into force, countries commit to remove tariffs on most goods by 2021. As of April 2008, The Forum Island Countries are also negotiating an Economic Partnership Agreement (EPA) with the European Union. It is important to note that the PICTA discussed here covers only trade of goods. At the Forum Island Leaders Meeting held in Rarotonga, Cook Islands on 28 August 2012, nine members signed the Pacific Island Countries Trade Agreement Trade in Services (PICTA TIS).[19] As of April 2008, there is an ongoing negotiation to design and agree on a protocol to include trade in services and the temporary movement of natural persons (a broader concept than the GATS's Mode 4).[20]

The Office of the Chief Trade Adviser was established on 29 March 2010 to provide independent advice and support to the Pacific Forum Island Countries (FICs) in the PACER Plus trade negotiations with Australia and New Zealand.

An “open skies” policy has been under work by a number of nations. The Pacific Islands Air Services Agreement or PIASA would allow member nations to have more access for their airlines to other member countries. To date there have been ten signatories, Cook Islands, Kiribati, Nauru, Niue, Papua New Guinea, Samoa, Solomon Islands, Tonga, Tuvalu and Vanuatu, while only six have ratified the agreement. These six are Cook Islands, Nauru, Niue, Samoa, Tonga and Vanuatu.

At the 19–20 August 2008 Pacific Islands Forum meeting in Niue, the leaders discussed Pacific Plan priorities including, “fisheries, energy, trade and economic integration, climate change and transport, in addition to information and communication technology, health, education, and good governance.” Leaders also discussed the impacts of climate change and adopted the Niue Declaration on Climate Change. Restoration of democratic governance in Fiji was discussed as were consequences should the interim government fail to meet established deadlines.[21] Regional assistance to the Solomon Islands and Nauru was discussed, followed by discussion of radioactive contamination in the Marshall Islands from US government tests. Regional institutional framework issues and WTO Doha round developments were discussed, followed by discussion of country-initiatives and the Pacific Region Infrastructure Facility launched 19 August 2008 to provide up to A$200 million over four years to help improve infrastructure in Kiribati, Samoa, Solomon Islands, Tonga, Tuvalu and Vanuatu.[10] The United Nations announced that it would partner with Samoa to develop an Inter-Agency Climate Change Centre to help Pacific island nations combat the impacts of climate change in the region.[22] In the 2013 forum, the Marshall Islands, supported by all other Pacific nations, claimed compensation from the United States for the nuclear tests conducted on the islands during the 1940s and 1950s.[23][24]

There has been a call from within both the Australian and New Zealand business communities to extend the CER (Closer Economic Relations) to other Pacific island nations, moving towards a single market and allowing the free movement of people and goods. A Pacific Union has been theorized as the next step of the forum.