The LUSAC-11 (Lepère United States Army Combat) was an early American two-seat fighter aircraft. It was a French design, commissioned and built in the United States during World War I and ordered in large numbers by the United States Army Air Corps, but these were cancelled at the end of the war and only thirty were built. The type was used for experimental purposes, setting several altitude records during the 1920s.

When the U.S. entered World War I, the Signal Corps had just 55 aircraft,[1] none fit for combat. The American Expeditionary Force was equipped with French types,[1] and the LUSAC was part of a plan to build French designs in the U.S.

Georges Lepère,[2] a member of the French Aeronautical Mission to the United States, was tasked by the Engineering Division of the United States Army Air Service to design a two-seat escort fighter.[3] His design was a two-bay biplane with upper and lower wings of equal span with forward stagger. It was of wood and fabric construction, with the fuselage consisting of a wooden box girder with plywood covering. It was powered by a 425 hp (317 kW) Liberty L-12 engine cooled by a radiator faired into the upper wing. Armament was two .30 inch (7.62 mm) machine guns synchronized to fire through the propeller, with two Lewis guns flexibly mounted on a Scarff ring at the observer's cockpit.[4]

Large orders for the new design were placed, with Packard, Brewster & Co., and the Fisher Body Corporation, a total of 3,525 ordered. The first prototype made its maiden flight at McCook Field, Dayton, Ohio, on 15 May 1918. Despite a forced landing due to fuel starvation on its first flight, testing proved successful, with speeds of 136 mph (219 km/h) being reached.[5] Only two prototypes and 25 production aircraft (by Packard) were completed by the Armistice that marked the end of World War I, and led to mass cancellation of outstanding orders for the LUSAC-11.[6]

Three additional aircraft were completed with 420 hp (317 kW) Bugatti 16 engines as LUSAC-21s. These were delivered in August 1919. 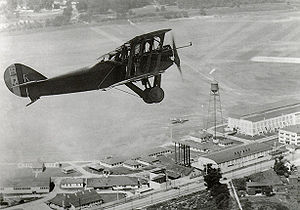 The LUSACs saw no squadron service, being used as liaison aircraft by US Military attaches in Europe, and for trials work in the United States.[6] One LUSAC-11, fitted with one of the first turbochargers,[7] flown by Major Rudolf Schroeder made an attempt for the world altitude record on 27 February 1920. Schroeder's oxygen supply failed during the attempt, causing the pilot to pass out, only regaining consciousness close to the ground. He was hospitalized after the near-disaster. Nevertheless, the aircraft had reached a height of 33,113 feet (10,099 m), a new world record.[8][9][10] The same aircraft was flown to a height of 34,508 ft (10,518 m) on 28 September 1921 by Lieutenant John A. Macready,[3] for which he won the Mackay Trophy. The record held for almost two years.[11]

A single LUSAC-11 survives today, preserved at the National Museum of the United States Air Force at Wright-Patterson Air Force Base.[12]

Data from The American Fighter[3]