Padayatra (Hindi, lit. journey by foot) is a journey undertaken by a politician(s) and/or prominent citizen(s) to interact more closely with different parts of society, educate about issues concerning them, and galvanize his or her supporters. Pada Yatras or 'Foot pilgrimages' are also Hindu religious pilgrimages undertaken towards sacred shrines or pilgrimage sites.[1] 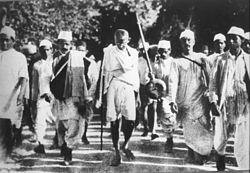 Mahatma Gandhi originated[citation needed] the padayatra with his famous Salt March to Dandi in 1930. In the winter of 1933-34, Gandhi went on a countrywide padayatra against untouchability.[2] Later, Gandhian Vinoba Bhave also started a padyatra, which was part of his Bhoodan movement in 1951. Starting from Telangana region, Bhave concluded his padayatra at Bodh Gaya.[3] On 6 January 1983, Chandra Shekhar started his padayatra from Kanyakumari and continued his 4260 km journey to Raj Ghat in Delhi till 25 June 1983 to understand the problems of masses.[4]

N. Chandrababu Naidu, former chief minister of Andhra Pradesh state, who at the age of 62 years had covered 1700 kilometres as of January 2013 and committed to covering the entirety of Andhra Pradesh; Y. S. Rajasekhara Reddy, who did a three-month-long padyatra covering 1475 kilometres, meeting people across state Andhra Pradesh; and Rajagopal, PV, who in Janadesh 2007 led 25,000 landless peasants on a 28-day march from Gwalior to Delhi.[citation needed]