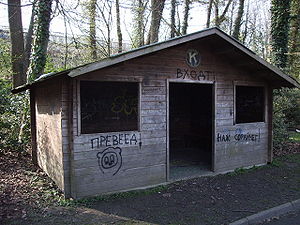 Padonkaffsky jargon used in graffiti in the city park of Aalst, Belgium.

Padonkaffsky jargon (Russian: язык падонкафф, iazyg padonkaff) or Olbanian (олбанский, olbanskiy) is a cant language developed by a subculture of Runet called padonki (Russian: падонки). It started as an Internet slang language originally used in the Russian Internet community. It is comparable to the English-based Leet. Padonkaffsky jargon became so popular that the former President of Russia Dmitry Medvedev jokingly suggested that Olbanian be taught in schools.[1]

The term Olbanian is an alteration of Albanian, although Albanian is not used to create Olbanian slang.

Learn Olbanian! (Russian: Учи олбанский!) is a popular phrase that was coined in a 2004 incident in LiveJournal when an English language user found a post written in Russian, which he didn't understand and was unable to translate. He asked what language was being used. He was jokingly answered that the post was in Albanian. He questioned why people were posting messages in Albanian by saying:

"Because? It's LIVEJOURNAL. An American website. Not an albanian; (#*!@()! site. Plus, being an American means that the rest of the world should have to cater to me. But that's just mypointofview."

Since then, the request to "Learn Olbanian!" became a friendly response to anyone using incorrect grammar or when saying something that doesn't make sense.

An invitation to "Learn Olbanian!" was directed at Madonna in 2006, when in her blog she used an electronic translator to address her Russian fans and called them "Russian ventilators" by mistake.[2]

The language was first developed in 1997 by intellectuals[3] with Internet access who were developing and using open-source software LiveJournal and Russian FidoNet. They were journalists, system administrators and professionals with academic degrees.

The language is based on sensational (mostly phonetic, but also counterphonetic) spelling of the Russian and Ukrainian languages often using profanity. It combines complex orthography with creative use of idioms and literary expression. It is often used to express disagreement,[4] amusement, or to create political satire. It was popularized by the padonki subculture on websites like Udaff.com and Fuck.ru (currently defunct) created by entrepreneur Egor Lavrov and Konstantin Rykov, now a deputy of the Duma.

Padonkaffsky jargon is difficult to translate with a traditional dictionary because many of the misspellings also involve puns and cultural slang. Padonkaffsky language has gone mainstream and is common in Russian vernacular and popular culture. As a result, the websites on which Padonkaffsky language originally appeared are now dominated by another kind of high-shock-value material, adult content.[5]