Pakistani architecture refers to the various structures built during different time periods in the modern day region of Pakistan. With the beginning of the Indus civilization around the middle of the 3rd millennium BC,[1] for the first time in the area which encompasses today's Pakistan an advanced urban culture developed with large structural facilities, some of which survive to this day. This was followed by the Gandhara style of Buddhist architecture that borrowed elements from the Ancient Greece. These remnants are visible in the Gandhara capital of Taxila.[2] 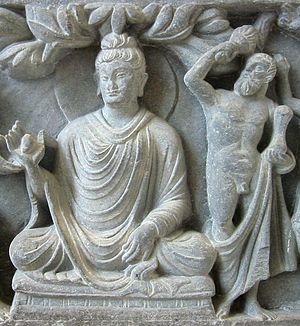 An example of the fusion of Greco-Buddhist styles: Representation of Buddha with Herakles

Archaeologists excavated numerous ancient cities, among them Mohenjo Daro, Harrappa and Kot Diji, which have a uniform, appropriate structure with broad roads as well as well thought out sanitary and drainage facilities. The majority of the discovered brick constructions are public buildings such as bath houses and workshops. Wood and loam served as construction materials. Large scale temples, such as those found in other ancient cities are missing. With the collapse of the Indus Valley civilization the architecture also suffered considerable damage.[3] View of Mohenjo-Daro towards the Great Bath.

Unfortunately little is known about this civilization, often called Harappan, partly because it disappeared about 1700 BC for reasons unknown and because its language remains undeciphered; its existence was revealed only in the midst of the 19th century (your text says the 1920s), and excavations have been limited. Surviving evidence indicates a sophisticated civilization. Cities like Harappa and Mohenjo-Daro (=the "City of the Dead") had populations of some 35,000, they were laid out according to grid system. Inhabitants lived in windowless baked brick houses built around a central courtyard. These cities also had a citadel, where the public and religious buildings were located, large pools for ritual bathing, granaries for the storage of food, and a complex system of covered drains and sewers. The latter rivaled the engineering skill of the Romans some 2,000 years later.

With the rise of Buddhism outstanding architectural monuments were again developed, which have lasted into the present.[1] In addition, the Persian and Greek influence led to the development of the Greco-Buddhist style, starting from the 1st century AD. The high point of this era was reached with the culmination of the Gandhara style. Important remnants of Buddhist construction are stupas and other buildings with clearly recognizable Greek statues and style elements like support columns which, beside ruins from other epochs, are found in the Gandhara capital Taxila in the extreme north of the Punjab. A particularly beautiful example of Buddhist architecture is the ruins of the Buddhist monastery Takht-i-Bahi in the northwest province. 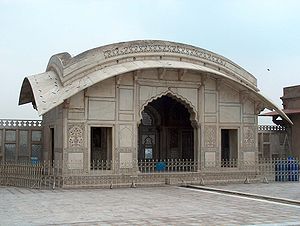 Mughal architecture: Naulakha pavilion (1633) in the fortress of Lahore

The arrival of Islam in today's Pakistan - first in Sindh - during the 8th century AD meant a sudden end of Buddhist architecture. However, a smooth transition to predominantly pictureless Islamic architecture occurred. The way early mosques were built with decorations oriented them strongly to the Arab style. The earliest example of a mosque from the days of infancy of Islam in South Asia is the Mihrablose mosque of Banbhore, from the year 727, the first Muslim place of worship on the Indian Subcontinent. Under the Delhi Sultan the Persian-centralasiatic style ascended over Arab influences. Most important characteristic of this style is the Iwan, walled on three sides, with one end entirely open. Further characteristics are wide prayer halls, round domes with mosaics and geometrical samples and the use of painted tiles. The most important of the few completely discovered buildings of Persian style is the tomb of the Shah Rukn-i-Alam (built 1320 to 1324) in Multan. At the start of the 16th century, the Indo-Islamic architecture was at the height of its boom. During the Mughal era design elements of Islamic-Persian architecture were fused with and often produced playful forms of the Hindustani art. Lahore, occasional residence of Mughal rulers, exhibits a multiplicity of important buildings from the empire, among them the Badshahi mosque (built 1673-1674), the fortress of Lahore (16th and 17th centuries) with the famous Alamgiri Gate, the colourful, the Wazir Khan Mosque,[4] (1634-1635) as well as numerous other mosques and mausoleums. Also the Shahjahan Mosque of Thatta in Sindh originates from the epoch of the Mughals. However, it exhibits partially different stylistic characteristics. Singularly, the innumerable tombs of the Chaukhandi are of eastern influence. Although constructed between 16th and 18th centuries, they do not possess any similarity to Mughal architecture. The stonemason works show rather typical Sindhi workmanship, probably from before Islamic times. The building activity of the Mughals came close to succumbing by the late 18th century. Afterwards hardly any special native architectural projects were undertaken. 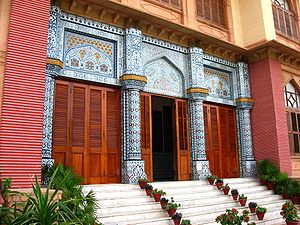 In the British colonial age predominantly representative buildings of the Indo-European style developed, from a mixture of European and Indian-Islamic components. Amongst the more prominent works are Mohatta Palace and Frere Hall in Karachi.

After independence Pakistan strove to express its newly found national identity through architecture. This reflects itself particularly in modern structures like the Faisal Mosque in Islamabad. In addition, buildings of monumental importance such as the Minar-e-Pakistan in Lahore or the mausoleum established with white marble known as Mazar-e-Quaid for the founder of the state expressed the self-confidence of the nascent state. The National Monument in Islamabad is one of the latest examples of integrating culture, independence and modern architecture.

There are currently six sites in Pakistan listed under the UNESCO World Heritage: