The Islamic Jihad Movement in Palestine (Arabic: حركة الجهاد الإسلامي في فلسطين‎‎, Harakat al-Jihād al-Islāmi fi Filastīn) known in the West as simply Palestinian Islamic Jihad (PIJ), is a Palestinian Islamist Paramilitary organization formed in 1981 whose objective is the destruction of the State of Israel and the establishment of a sovereign, Islamic Palestinian state.[2] PIJ has been labelled a terrorist organisation by the United States,[3] the European Union,[4] the United Kingdom,[5] Japan,[6] Canada,[7] Australia,[8] New Zealand[9][10] and Israel. Iran is a major financial supporter of the PIJ.[11][12][13][14] Following the Israeli and Egyptian squeeze on Hamas in early 2014, PIJ has seen its power steadily increase with the backing of funds from Iran.[15] Its financial backing is believed to also come from Syria. The Islamic Jihad Movement has sent "its gratitude to the brothers in Hezbollah, the Islamic resistance in South Lebanon. Particularly Hassan Nasrallah, for their stance and support, be it financial, military or moral support".[citation needed]

The armed wing of PIJ is Al-Quds Brigades, formed in 1981, which is active in the West Bank and Gaza Strip, with its main strongholds in the West Bank being the cities of Hebron and Jenin. Its operations have included suicide bombings, attacks on Israeli civilians, as well as the firing of rockets into Israel. PIJ has much in common with Hamas, with both fighting against the existence of the State of Israel. Both groups were formed as offshoots of the Muslim Brotherhood and receive a large amount of funding from Iran. With similar goals, Hamas and PIJ have worked together on a number of projects. 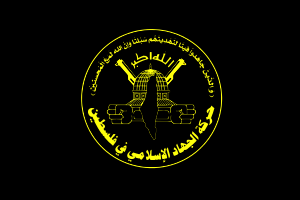 Flag of the Islamic Jihad Movement in Palestine. The organization's banner leads from a verse in the Qur'an "And those who do jihad for Us, we shall guide them to our paths. And God is with those who do good."[16] 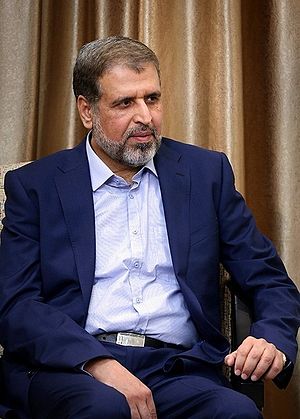 Ramadan Abdullah Mohammad Shallah is wanted by the FBI for conspiracy to conduct the affairs of the designated international terrorist organization known as the "Palestinian Islamic Jihad".

PIJ was formally established in Gaza in 1981 by two Palestinian activists: Dr Fathi abd al-Aziz Shaqaqi, a Rafah-based physician, and Shaykh Abd al-Aziz Awda, an Islamic preacher from the Jabaliyya refugee camp, as well as Ramadan Shalah, Bashir Moussa and three other Palestinian radicals. Based in Egypt, Shaqaqi and Awda were originally members of the Muslim Brotherhood. Their views on the destruction of Israel, however, led them in 1979 to establish Islamic Jihad-Shaqaqi Faction, a branch of the Egyptian Islamic Jihad.[17] and conducted operations out of Egypt. The Shaqaqi Faction was expelled from Egypt in 1981 following the assassination of Egypt’s President Anwar Sadat by the Egyptian Islamic Jihad. Shaqaqi and Awda returned to Gaza where they formally established PIJ,[18][19] from where it continued its operations.

The aim of the organization was the establishment of a sovereign, Islamic Palestinian state within the geographic borders of pre-1948 Mandatory Palestine. Completely rejecting the political process, the organization professes that its goals can only be achieved through military means.[20][21]

PIJ began its armed operations against Israel in 1984. In 1988, its leaders were exiled by Israel to Lebanon. While in Lebanon, the group received training, support and other backing from Hezbollah and its backers in Iran, and developed a close relationship with the organization. In 1990, the headquarters of PIJ moved to the Syrian capital, Damascus, where it continues to be based, with offices in Beirut, Tehran, and Khartoum.

PIJ masterminded several suicide bombings in Israel,[22] the first one being the Tel Aviv–Jerusalem bus 405 suicide attack in 1989 which resulted in 16 civilian deaths. (See List of Palestinian suicide attacks.) Shaqaqi was a key player in setting up the Alliance of Palestinian Forces in January 1994, a coalition of eight PLO groups, Islamic Jihad and Hamas, rejecting the Oslo process.[23] PIJ was and continues to be considered by Israel the most extreme organization in its operational methods and commitment to the destruction of Israel.[24] By 1995 PIJ was, according to Fisk, "perhaps the fiercest of all Israel's modern-day enemies."[25] Shaqaqi was assassinated in 1995 in Malta, and Ramadan Shalah became secretary-general of the organisation.[citation needed] There was a subsequent crackdown on the PIJ by Israel and the Palestinian National Authority which led to a significant weakening of the organization.[26]

On 20 February 2003, University of South Florida computer engineering professor Sami Al-Arian was arrested after being indicted on a terrorism-related charge. U.S. Attorney General John Ashcroft alleged at a press conference that Al-Arian was the North American head of the Palestinian Islamic Jihad. On 6 December 2006, Sami Al-Arian was sentenced to 57 months in prison, pursuant to a plea bargain.[27] In November 2006 he was found guilty of civil contempt for refusing to testify before a federal grand jury and served 21 months in prison on that conviction. On 27 June 2014, the US Federal Government dropped all charges against Al-Arian.[28]

PIJ is alleged to have used minors. On 29 March 2004, 15-year-old Tamer Khuweir of Rifidia, a suburb of Palestinian city Nablus in the West Bank, was captured by Israeli forces as he planned to carry out a suicide mission. His older brother claimed he was brainwashed and demanded the Palestinian Authority investigate the incident and arrest those responsible for it.[29]

Following further terrorist attacks on civilians in Israel, Shalah and Awda were indicted under United States law and added in 2006 to the United States FBI Most Wanted Terrorists list.[30]

In February 2012, the Hamas government in the Gaza Strip distanced itself from PIJ. During the March 2012 Gaza–Israel clashes, which followed the Israeli assassination of Popular Resistance Committees leader, Zuhir al-Qaisi, who bragged of kidnapping Gilad Shalit, PIJ and PRC opened attacks on Israel. Hamas refrained from joining PIJ and PRC in attacking Israel.[31] Over a hundred Palestinians were killed or injured in the ensuing violence, but Israel did not attack any Hamas targets at the time.[32] The eventual ceasefire was negotiated between Israel and the militant groups, not Hamas.

London-based Arabic newspaper Asharq al-Awsat reported in May 2015 that Iran had stopped funding PIJ due to the group's neutrality over the Saudi Arabian-led intervention in Yemen, throwing PIJ into a severe financial crisis. Iran had expected PIJ to condemn the intervention led by Saudi Arabia, Iran's chief regional rival. Palestinian newspaper al-Quds reported that Iran is now supporting an offshoot of PIJ called as-Sabirin (Arabic for "the patient ones"), headed by Islamic Jihad veteran Hisham Salem.[33]

Ramadan Shalah was interviewed by a delegation from the World Federation of Scientists in Damascus, Syria, 15 December 2009. In this interview he argues, that the Israelis will accept neither a two state nor a one state solution and that the only choice is to continue the armed struggle until Israel's defeat.

[...] We are the indigenous people of the land. I was born in Gaza. My family, brothers and sisters, live in Gaza. But I am not allowed to visit them. But any American or Siberian Jew is allowed to take our land. There is no possibility today of a two-state solution. That idea is dead. And there is no real prospect of a one-state solution. [...]

[...] I will never, under any conditions, accept the existence of the state of Israel. I have no problem living with the Jewish people. [...]

[...] We have lived together in peace for centuries. And if Netanyahu were to ask if we can live together in one state, I would say to him: "If we have exactly the same rights as Jews to come to all of Palestine. If Khaled Meshaal and Ramadan Shalah can come whenever they want, and visit Haifa, and buy a home in Herzliyah if they want, then we can have a new language, and dialogue is possible." [...][34]

The Palestinian Islamic Jihad has claimed responsibility for many militant activities over the years. The organization is responsible for a number of attacks including more than 30 suicide bombings; indeed, on 22 December 2001, PIJ vowed to continue its campaign despite Hamas' decision to halt suicide bombings inside Israel in response to an alleged crackdown by Yasser Arafat. PIJ's representative in Lebanon, Abu Imad Al-Rifai noted, "Our position is to continue. We have no other choice. We are not willing to compromise."[35] The international community considers the use of indiscriminate attacks on civilian populations[36] and the use of human shields[37][38] as illegal under international law.[39]

The Palestinian Islamic Jihad have claimed responsibility for the following attacks:

Islamic Jihad has also deployed its own rocket, similar to the Qassam rocket used by Hamas, called the al-Quds rocket.

Islamic Jihad also control dozens of religious organizations in the Palestinian territories that are registered as NGOs and operate mosques, schools, and medical facilities that offer free services.[53] Like other Islamic associations, these are heavily scrutinized by the Palestinian National Authority who have shut some of them down.[53] In one Islamic Jihad kindergarten graduation, children dressed up in military uniforms, waved guns, shouted anti-Israel slogans, and spoke of blowing themselves up to kill "Zionists".[54][55]

Islamic Jihad also operates dozens of summer camps for children. They have opened up 51 summer camps which attracted approximately 10,000 children in 2010.

We teach the children the truth. How the Jews persecuted the prophets and tortured them. We stress that the Jews killed and slaughtered Arabs and Palestinians every chance they got. Most important, the children understand that the conflict with the Jews is not over land, but rather over religion. As long as Jews remain here, between the [Jordan] river and the sea, they will be our enemy and we will continue to pursue and kill them. When they leave we won't hurt them."[56]