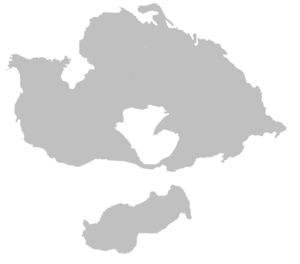 A rough approximation of Pangaea Ultima

Pangaea Ultima (also called Pangaea Proxima, Neopangaea, and Pangaea II) is a possible future supercontinent configuration. Consistent with the supercontinent cycle, Pangaea Ultima could occur within the next 250 million years. This potential configuration, hypothesized by Christopher Scotese, earned its name from its similarity to the previous Pangaea supercontinent. The concept was based on examination of past cycles of formation and breakup of supercontinents, not on current understanding of the mechanisms of tectonic change, which are too imprecise to project that far into the future. "It's all pretty much fantasy to start with", Scotese has said. "But it's a fun exercise to think about what might happen. And you can only do it if you have a really clear idea of why things happen in the first place."[1]

Supercontinents describe the merger of all, or nearly all, of the Earth's landmass into a single contiguous continent. In the Pangaea Ultima scenario, subduction at the western Atlantic, east of the Americas, leads to the subduction of the Atlantic mid-ocean ridge followed by subduction destroying the Atlantic and Indian basin, causing the Atlantic and Indian Oceans to close, bringing the Americas back together with Africa and Europe. As with most supercontinents, the interior of Pangaea Proxima would probably become a semi-arid desert prone to extreme temperatures.[2]

According to the Pangaea Ultima hypothesis, the Atlantic and Indian Oceans will continue to get wider until new subduction zones bring the continents back together, forming a future Pangaea. Most continents and microcontinents are predicted to collide with Eurasia, just as they did when most continents collided to Laurentia.[3]

Around 50 million years from now, North America is predicted to shift slightly west and Eurasia would shift to the east, and possibly even to the south, bringing Great Britain closer to the North Pole and Siberia southward towards warm, subtropical latitudes. Africa is predicted to collide with Europe and Arabia, closing the Mediterranean Sea (completely closing the Tethys Ocean (or Neotethys) and the Red Sea). A long mountain range would then extend from Iberia, across Southern Europe (the Mediterranean Mountain Range) into Asia. Some are even predicted to have peaks higher than Mount Everest. Similarly, Australia is predicted to beach itself on the doorstep of Southeast Asia and a new subduction zone is predicted to encircle Australia and extend westward across the Central Indian Ocean. Meanwhile, Southern and Baja California are predicted to have already collided with Alaska with new mountain ranges formed between them.[4]

About 150 million years from now, the Atlantic Ocean is predicted to stop widening and begin to shrink because some of the Mid-Atlantic Ridge will have been subducted. In this scenario, a mid-ocean ridge between South America and Africa will probably be subducted first; the Atlantic Ocean is predicted to have narrowed as a result of subduction beneath the Americas. The Indian Ocean is also predicted to be smaller due to northward subduction of oceanic crust into the Central Indian trench. North and South America may be pushed back southeast, and southern Africa would almost hit the equator and have reached the Northern Hemisphere. Australia may join back to Antarctica, meeting the South Pole.[5]

When the last of the Mid-Atlantic Ridge is subducted beneath the Americas, the Atlantic Ocean is predicted to close rapidly.[6]

At 250 million years in the future, the Atlantic and Indian oceans are predicted to have closed. North America is predicted to have already collided with Africa, but be in a more southerly position than where it drifted. South America is predicted to be wrapped around the southern tip of Africa, with Patagonia in contact with Indonesia, enclosing a remnant of the Indian Ocean (called the Indo-Atlantic Ocean). Antarctica would then once again be at the South Pole and the Pacific will have grown wider, encircling half the Earth.[6]

Paleogeologist Ronald Blakey has described the next 15 to 100 million years of tectonic development as fairly settled and predictable, without supercontinent formation.[7] Beyond that, he cautions that the geologic record is full of unexpected shifts in tectonic activity that make further projections "very, very speculative".[7] In addition to Pangaea Ultima, two other hypothetical supercontinents—"Amasia" and "Novopangea"— were illustrated in a 2007 New Scientist article.[8]