From Infogalactic: the planetary knowledge core
Jump to: navigation, search
For other uses, see Pantheon.

The Panthéon (Latin: pantheon, from Greek πάνθειον (ἱερόν) '(temple) to all the gods'[1]) is a building in the Latin Quarter in Paris. It was originally built as a church dedicated to St. Genevieve and to house the reliquary châsse containing her relics but, after many changes, now functions as a secular mausoleum containing the remains of distinguished French citizens. It is an early example of neoclassicism, with a façade modeled on the Pantheon in Rome, surmounted by a dome that owes some of its character to Bramante's "Tempietto". Located in the 5th arrondissement on the Montagne Sainte-Geneviève, the Panthéon looks out over all of Paris. Designer Jacques-Germain Soufflot had the intention of combining the lightness and brightness of the Gothic cathedral with classical principles, but its role as a mausoleum required the great Gothic windows to be blocked. 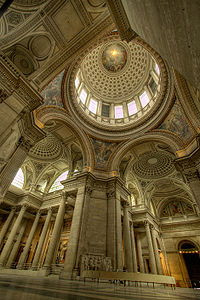 Interior Dome of the Panthéon

Pediment of the Panthéon with the motto: Aux grands hommes, la patrie reconnaissante ("To the great men, the grateful homeland"). 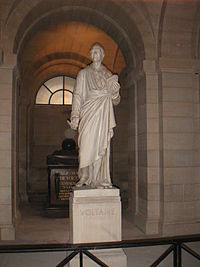 Voltaire's statue in the crypt of the Panthéon

King Louis XV vowed in 1744 that if he recovered from his illness he would replace the ruined church of the Abbey of St Genevieve with an edifice worthy of the patron saint of Paris. He did recover, and entrusted Abel-François Poisson, marquis de Marigny with the fulfillment of his vow. In 1755, Marigny commissioned Jacques-Germain Soufflot to design the church, with construction beginning two years later. 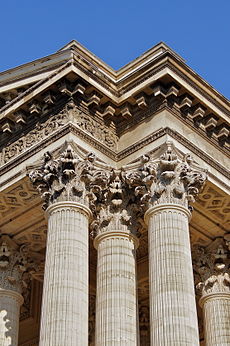 The overall design was that of a Greek cross with massive portico of Corinthian columns. Its ambitious lines called for a vast building 110 metres long by 84 metres wide, and 83 metres high. No less vast was its crypt. Soufflot's masterstroke is concealed from casual view: the triple dome, each shell fitted within the others, permits a view through the oculus of the coffered inner dome of the second dome, frescoed by Antoine Gros with The Apotheosis of Saint Genevieve. The outermost dome is built of stone bound together with iron cramps and covered with lead sheathing, rather than of carpentry construction, as was the common French practice of the period. Concealed flying buttresses pass the massive weight of the triple construction outwards to the portico columns.

The foundations were laid in 1758, but due to the economic problems in France at this time, work proceeded slowly. In 1780, Soufflot died and was replaced by his student, Jean-Baptiste Rondelet. The remodeled Abbey of St. Genevieve was finally completed in 1790, coinciding with the early stages of the French Revolution. Upon the death of the popular French orator and statesman Honoré Gabriel Riqueti, comte de Mirabeau on 2 April 1791, the National Constituent Assembly, whose president had been Mirabeau, ordered that the building be changed from a church to a mausoleum for the interment of great Frenchmen, retaining Quatremère de Quincy to oversee the project. Mirabeau was the first person interred there, on 4 April 1791.[2] Jean Guillaume Moitte created a pediment sculptural group The Fatherland crowning the heroic and civic virtues that was replaced upon the Bourbon Restoration with one by David d'Angers.

Twice since then it has reverted to being a church, only to become again a meeting house dedicated to the great intellectuals of France. The cross of the dome, which was retained in compromise, is again visible during the current major restoration project.

In 1851, physicist Léon Foucault demonstrated the rotation of the earth by constructing a 67-metre (220 ft) Foucault pendulum beneath the central dome. The original sphere from the pendulum was temporarily displayed at the Panthéon in the 1990s (starting in 1995) during renovations at the Musée des Arts et Métiers. The original pendulum was later returned to the Musée des Arts et Métiers, and a copy is now displayed at the Panthéon.[3]

From 1906 to 1922 the Panthéon was the site of Auguste Rodin's famous sculpture The Thinker.

In 2006, Ernesto Neto, a Brazilian artist, installed "Léviathan Thot", an anthropomorphic installation inspired by the biblical monster. The art installation was in the Panthéon from 15 September 2006 until 31 October for Paris' Autumn Festival.

In late 2006, a "cultural guerilla movement" calling itself The Untergunther (part of the larger organization les UX) completed a year-long project by which they covertly repaired the Panthéon's antique clockworks.[4][5][6] 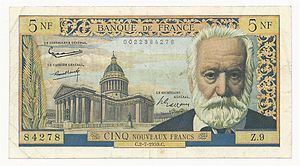 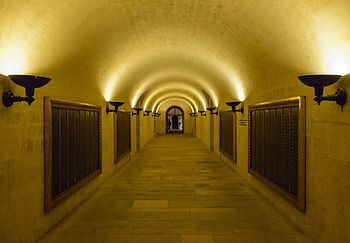 The inscription above the entrance reads AUX GRANDS HOMMES LA PATRIE RECONNAISSANTE ( "To great men, the grateful homeland"). By burying its great people in the Panthéon, the nation acknowledges the honour it received from them. As such, interment here is severely restricted and is allowed only by a parliamentary act for "National Heroes". Similar high honours exist in Les Invalides for historical military leaders such as Napoléon, Turenne and Vauban.

Among those buried in its necropolis are Voltaire, Rousseau, Victor Hugo, Émile Zola, Jean Moulin, Louis Braille, Jean Jaurès and Soufflot, its architect. In 1907 Marcellin Berthelot was buried with his wife Mme Sophie Berthelot, the first woman to be interred.[7] Marie Curie was the first woman interred based on her own merits.[8] Geneviève de Gaulle-Anthonioz and Germaine Tillion, heroines of the French resistance, were interred in 2015.[9]

The widely repeated story that the remains of Voltaire were stolen by religious fanatics in 1814 and thrown into a garbage heap is false. Such rumours resulted in the coffin being opened in 1897, which confirmed that his remains were still present.[citation needed]

On 30 November 2002, in an elaborate but solemn procession, six Republican Guards carried the coffin of Alexandre Dumas (1802–1870), the author of The Three Musketeers and other famous novels, to the Panthéon. Draped in a blue-velvet cloth inscribed with the Musketeers' motto: "Un pour tous, tous pour un" ("One for all, all for one,") the remains had been transported from their original interment site in the Cimetière de Villers-Cotterêts in Aisne, France. In his speech, President Jacques Chirac stated that an injustice was being corrected with the proper honoring of one of France's greatest authors.

In January 2007, President Jacques Chirac unveiled a plaque in the Panthéon to more than 2600 people recognized as Righteous Among the Nations by the Yad Vashem memorial in Israel for saving the lives of Jews who would otherwise have been deported to concentration camps. The tribute in the Panthéon underlines the fact that around three quarters of the country's Jewish population survived the war, often thanks to ordinary people who provided help at the risk of their own life. This plaque says :

Which can be translated as follows :

Under the cloak of hatred and darkness that spread over France during the years of [Nazi] occupation, thousands of lights refused to be extinguished. Named as "Righteous among the Nations" or remaining anonymous, women and men, of all backgrounds and social classes, saved Jews from anti-Semitic persecution and the extermination camps. Braving the risks involved, they incarnated the honour of France, and its values of justice, tolerance and humanity.

Inside panoramic view of the Panthéon.

This may be an incomplete list. You can help by expanding it with reliably sourced entries.