From Infogalactic: the planetary knowledge core
Jump to: navigation, search
For the Miles Davis album, see Panthalassa: The Music of Miles Davis 1969–1974. 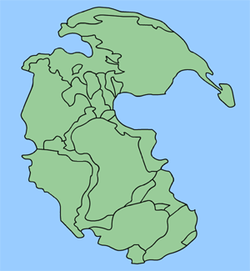 Panthalassa (Greek πᾶν "all" and θάλασσα "ocean"[1]), also known as the Panthalassic Ocean, was the vast global ancestral Pacific ocean that surrounded the supercontinent Pangaea, during the late Paleozoic and the early Mesozoic eras. It included the Pacific Ocean to the west and north and the Tethys Ocean to the southeast. It became the Pacific Ocean, following the closing of the Tethys basin and the breakup of Pangaea, which created the Atlantic, Arctic, and Indian Ocean basins. The Panthalassic is often called the Paleo-Pacific ("old Pacific") because the Pacific Ocean developed from it in the Mesozoic to the present.

In the map shown here, the Earth's equator was a line that roughly crossed the spot where Spain, Casablanca (Morocco) and Boston (U.S.) met. South of that line, the land mass is referred to as Gondwana. North of the line, it is referred to as Laurasia.

In the map, the Panthalassa Ocean is depicted as an empty ocean. Plate tectonic studies[2] have argued that during the Paleozoic and Mesozoic small fragments, or terranes (currently preserved at the North American and Asian margins), were drifting across the ocean plate until they accreted at the surrounding continental margins.

By 900 million years ago (in the early Neoproterozoic) a triple junction formed as the supercontinent Rodinia started to rift apart. Between about 800 million and 700 million years ago Rodinia split in half in a significant rifting event which opened up the Panthalassic Ocean to the west of Laurentia, a continent that became North America.

In western Laurentia (North America), a tectonic episode that preceded this rifting produced failed rifts that harbored large depositional basins in Western LaurentiaĎdf2⟨⟩other supercontinent started to form: Pannotia, which was shaped like a "V". Inside the "V" was Panthalassa, outside of the "V" were the Pan-African Ocean and remnants of the Mirovia Ocean.

Based on seismic tomography, subducted plates that are imaged in the mantle indicate that at least several different oceans or seas can be defined in the Panthalassa Ocean separated by intra-oceanic subduction zones[3] (i.e. Wrangellia, Stikinia and Telkhinia during the Triassic and Jurassic). The two main oceans in the centre are named Pontus Ocean in the west, of which its oceanic plates completely subducted over time and Thalassa Ocean in the east, hosting the Farallon Plate, Phoenix Plate, Izanagi Plate and later Pacific Plate. Peripheral oceans or seas have been named (clockwise) Mongol-Okhotsk Ocean, Oimyakon Ocean,[2] Slide Mountain Ocean[2] and Mezcalera Ocean. The transition to the Tethys Ocean in the west occurs via a number of undocumented oceans,[3] of which the Cretaceous Junction Plate[4] is a successor.

Most of Panthalassa's oceanic basin and crust has been subducted under the North American plate, and the Eurasian Plate.

Panthalassa's oceanic plate remnants may be the Juan de Fuca, Gorda, Cocos and the Nazca plates, all four of which were part of the Farallon Plate.

The Pacific Ocean evolved from Panthalassa after the breakup of the supercontinent of Pangaea, which in Greek means, "all the earth."