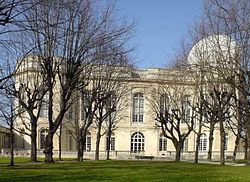 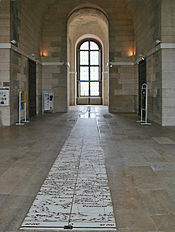 Meridian Room (or Cassini Room) at the Paris Observatory. The Paris Meridian is traced on the floor.

Administratively, it is a grand établissement of the French Ministry of National Education, with a status close to that of a public university. Its missions include:[1]

It maintains a solar observatory at Meudon (Lua error in Module:Coordinates at line 668: callParserFunction: function "#coordinates" was not found.) and a radio astronomy observatory at Nançay.[1] It was also the home to the International Time Bureau until its dissolution in 1987.[2] 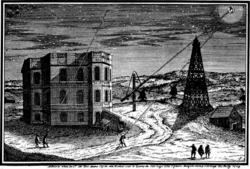 The observatory in the beginning of the eighteenth century with the wooden "Marly Tower" on the right, moved to the grounds by Giovanni Cassini, for the mounting of long tubed telescopes and even longer tubeless aerial telescopes.

Its foundation lies in the ambitions of Jean-Baptiste Colbert to extend France's maritime power and international trade in the 17th century. Louis XIV promoted its construction starting in 1667,[3] being completed in 1671. It thus predates by a few years the Royal Greenwich Observatory in England, which was founded in 1675. The architect of the Paris Observatory was Claude Perrault whose brother, Charles, was secretary to Colbert and superintendent of public works.[4] Optical instruments were supplied by Giuseppe Campani. The buildings were extended in 1730, 1810, 1834, 1850, and 1951.[3] The last extension incorporates the spectacular Meridian Room designed by Jean Prouvé.[5]

The world's first national almanac, the Connaissance des temps was published by the observatory in 1679, using eclipses in Jupiter's satellites to aid sea-farers in establishing longitude. In 1863, the observatory published the first modern weather maps. In 1882, a 33 cm (13 in) astrographic lens was constructed, an instrument that catalysed what proved to be the over-ambitious, international Carte du Ciel project.[citation needed]

In November 1913, the Paris Observatory, using the Eiffel Tower as an antenna, exchanged sustained wireless (radio) signals with the United States Naval Observatory to determine the exact difference of longitude between the two institutions.[6]

The Meudon great refractor (Meudon 83-cm) was a 83 cm (33 in) aperture refractor, which with September 20, 1909 observations by E.M. Antoniadi helped disprove the Mars canals theory. It was a double telescope completed in 1891, with secondary having 62 cm (24 in) aperture lens for photography. It was one of the largest active telescopes in Europe.

The title of director of the Observatory was officially given for the first time to César-François Cassini de Thury by a Royal brevet dated November 12, 1771.[7] However, the important role played by his grandfather and father in this institution during its first century actually gives them somewhat the role of director.

Nowadays, the AstroQueyras amateur astronomy association operates the facility, using a 60 cm (24 in) telescope on loan from the Observatoire de Haute Provence. Numerous asteroids have been discovered there.[9]