From Infogalactic: the planetary knowledge core
(Redirected from Parliament of Latvia)
Jump to: navigation, search 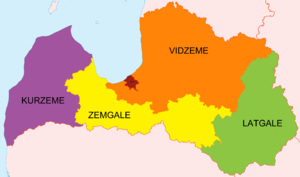 Deputies are elected from five constituencies, based on the cultural regions of Latvia.

The Saeima (Latvian pronunciation: [sæimaː]) is the parliament of the Republic of Latvia. It is a unicameral parliament consisting of 100 members who are elected by proportional representation, with seats allocated to political parties which gain at least 5% of the popular vote. Elections are scheduled to be held once every four years, normally on the first Saturday of October. The most recent elections were held in October 2014.

The President of Latvia can dismiss the Saeima and request early elections. The procedure for dismissing it involves substantial political risk to the president, including a risk of loss of office. On May 28, 2011, president Valdis Zatlers decided to initiate the dissolution of the Saeima, which was approved in a referendum, and the Saeima was dissolved on 23 July 2011.[1]

Deputies are elected to represent one of five constituencies: Kurzeme (13 deputies), Latgale (15), Riga (30), Vidzeme (27), and Zemgale (15). Seats are distributed in each constituency by open list proportional representation among the parties that overcome a 5% national election threshold using an unmodified version of the Sainte-Laguë method.

The word "Saeima", meaning "a gathering, a meeting, a council", was constructed by the Young Latvian Juris Alunāns. It stems from the archaic Latvian word eima meaning "to go" (derived from the PIE *ei "to go" and also a cognate with the Ancient Greek eimi, Gaulish eimu, among others). [2] Despite the visual similarity to the names of the Lithuanian and Polish national parliaments - Seimas and Sejm - the name "Saeima" is linguistically distinct, and does not have any historical ties to its Lithuanian and Polish counterparts.