From Infogalactic: the planetary knowledge core
Jump to: navigation, search
This article is about the europarty established in 1992. For the European Parliament Group and its predecessors, see Progressive Alliance of Socialists and Democrats.

The Party of European Socialists (PES) is a social-democratic European political party.[3] The PES comprises national-level political parties primarily from member states of the European Union (EU) and other nations of the European continent. The PES member parties are themselves members of the Socialist International. The Progressive Alliance of Socialists and Democrats (S&D) is the political group in the European Parliament of the PES. The PES also operates in the Committee of the Regions (in the PES Group in the Committee of the Regions) and the European Council. The PES is currently led by Sergei Stanishev, former Prime Minister of Bulgaria.

The party's English name is "Party of European Socialists". In addition, the following names are used in other languages:

In March 2014 following the congress in Rome, the PES added the tagline "Socialists and Democrats" to its name following the admission of the Democratic Party into the organisation.[4]

In 1961, the Socialists in the European Parliament attempted to produce a common European Socialist Programme but were neglected due to the applications of Britain, Denmark, Ireland and Norway to join the European Communities. The Socialist's 1962 congress pushed for greater democratisation and powers for Parliament though it was only in 1969 that this possibility was examined by the member states.[5]

In 1973, Denmark, Ireland and the United Kingdom joined the European Community bringing in new parties from these countries. The enlarged Socialist Congress met in Bonn and inaugurated the Confederation of the Socialist Parties of the European Community. The Congress also passed a resolution on social policy, including the right to decent work, social security, democracy and equality in the European economy.[6] In 1978, the Confederation of Socialist Parties approved the first common European election Manifesto. It focused on several goals among which the most important were to ensure a right to decent work, fight pollution, end discrimination, protect the consumer and promote peace, human rights and civil liberties.

The Luxembourg Congress approved the first Statue of the Confederation of Socialist Parties in 1980. The accession of Greece in 1981, followed by Spain and Portugal in 1986 brought in more parties. In 1984 another common Socialist election manifesto was approved at a congress in Luxembourg. The Manifesto proposed a socialist remedy for the economic crisis by establishing a link between industrial production, protection of the fundamental social benefits and the fight for an improved quality of life.[6]

In 1992, with the European Communities becoming the European Union and with the Treaty of Maastricht establishing the framework for political parties at the European Level, the Confederation was able to mobilize a majority of delegates in favour of transforming the Confederation into the Party of European Socialists. The first programme of the party concentrated on job creation, democracy, gender equality, environmental and consumer protection, peace and security, regulation of immigration, discouragement of racism and fighting organised crime.[6]

In 2010, the Foundation for European Progressive Studies was founded as the political foundation of the PES.

He resigned at the PES Progressive Convention of Brussels on 24 November 2011, and was replaced by Sergei Dmitrievich Stanishev, chairman of the Bulgarian Socialist Party (BSP), elected PES Interim President, by acclamation, by the PES Presidency.

On the same day, the PES Council made the decision that the next PES candidate for Commission President would be democratically elected through a PES presidential primary taking place in January 2014.

The Party of European Socialists (PES) held its latest Congress in Brussels on 28–29 September 2012.[8] These congresses are organized every two and a half years,[9] once during the year of the elections for the European Parliament, and once at mid-term. The latest Congress elected Sergei Stanishev as PES President, as well as four deputies: Jean-Christophe Cambadélis (1st Vice-President – PS), Elena Valenciano (PSOE), Jan Royall (Labour) and Katarina Nevedalova (Smer-SD) and prepared the 2014 European elections. The same Congress elected Achim Post (SPD) as new Secretary General.

The congress also adopted a process presented by the PES as more democratic and transparent[10] for the selection of their candidate for the Presidency of the European Commission in 2014.

Presidents of the Party of European Socialists and its predecessors.[11]

There are thirty-two full member parties from all the twenty-eight member states and Norway. There are a further eleven associate and ten observer parties. PES is an associated organisation of the Socialist International. Young European Socialists is the youth organisation of PES and PES Women is the party's women's organisation, led by Zita Gurmai.[12]

The parties meet at the party Congress twice every five years to decide on political orientation, such as adopting manifestos ahead of elections. Every year that the Congress does not meet, the Council (a quarter Congress) shapes PES policy. The Congress also elects the party's President, Vice Presidents and the Presidency.[12]

The President (currently former Prime Minister of Bulgaria Sergei Stanishev) represents the party on a daily basis and chairs the Presidency, which also consists of the Secretary General, President of the S&D group in Parliament and one representative per full/associate member party and organisation. They may also be joined by the President of the European Parliament (if a PES member), a PES European Commissioner and a representative from associate parties and organisations.[12]

The Leader's Conference brings together Prime Ministers and Party Leaders from PES parties three to four times a year to agree strategies and resolutions.[12]

In December 2009, the PES decided to put forward a candidate for Commission President at all subsequent elections.[13] On the 1st of March, 2014, the PES organised for the first time a European election Congress where a Common Manifesto [14] was adopted and the Common Candidate designate for the post of Commission President, Martin Schulz, was elected by over a thousand participants in Rome, Italy. PES member parties across Europe joined forces to campaign for the European elections, and a mass grassroots movement sprang up in support of Martin Schulz, aiming to ‘knock the vote’ in support of his candidacy.

PES in the European institutions

Overview of the European institutions

The PES has ten out of the 28 heads of State or Government that attend the PES summits in preparation for the European Council:

European Council and Council of Ministers 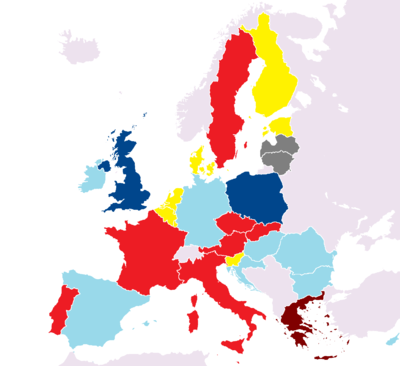 The makeup of national delegations to the Council of Ministers is at some times subject to coalitions: for the above governments led by a PES party, that party may not be present in all Council configurations; in other governments led by non-PES parties a PES minister may be its representative for certain portfolios. PES is in coalition in a further seven countries: Finland, Germany, Greece, Ireland, Luxembourg, The Netherlands and Slovenia.

Parliamentary Assembly of the Council of Europe

Committee of the Regions

It has 33 full members from 27 of the 28 EU states plus Norway, although not all of them have elected MEPs.[17]