From Infogalactic: the planetary knowledge core
Jump to: navigation, search
This article is about the district. For its eponymous headquarters, see Patan, Gujarat. 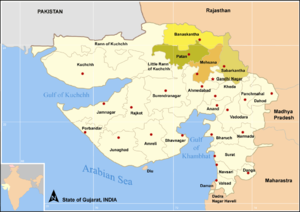 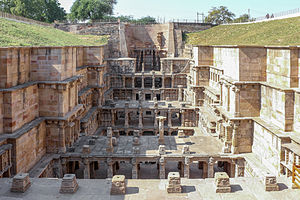 Patan district (Gujarati: પાટણ જિલ્લો) is one of the 33 districts of Gujarat state in western India. This district is located in northern Gujarat and bounded by Banaskantha district in the north and northeast, Mehsana district in the east and southeast, Surendranagar district in the south and Kutch District and the Kutch nu Nanu Ran (Little Rann of Kutch) in the west. The district occupies an area of 5740 km².

Some of its areas, Harij and Sami, bordering Kutch are quite sensitive[citation needed] as there is no settled population between there and the border of Pakistan even though geographically the border is quite some distance away.

The district is named after Patan, the headquarters of the district. It was one of the ancient and early medieval capitals of Gujarat, described vividly in the novels written by K.M. Munshi. Originally King Vanraj Chavda established this new city and named Anahilpur Patan OR Anhilvad Patan after the name of his very close friend and the pioneer in establishing the state of Patan, the long fought battle against the then ruler from south with help of local tribals, citizens and loyal warriors to his father The king of state Panchasara few kilometers away from Patan today. Later, a number of rulers like Bhimdev,Kumarpal,Siddharaj and Karndev ruled from Patan.

Patan itself has few good tourist spots, to attract people interested in heritage and history. Sahastraling Lake (A lake of thousand Lingas) and Ranakai Vav (A deep well) are very good attractions, apart from Panchasar Jain Temple, which is supposed to have lot ancient writings belonging to Jain religion.

There are nearly 150 Jain temples still in existence. Panchar Parshwanath and Shamla Parasnath are most popular Jain temples in Patan. Apart from that town of Patan has lot of facilities for medical treatment and is undoubtedly the medical centre of North Gujarat.

Gujarat would house the largest solar energy park in Asia in two years with a power production capacity of 500MW. The park, on the linesate, is being developed.