Patricia Helen "Pat" Kennedy Lawford[1] (May 6, 1924 – September 17, 2006) was an American socialite and the sixth of nine children of Rose and Joseph P. Kennedy, Sr. She was a sister of President John F. Kennedy, Senator Robert F. Kennedy, and longtime Senator Ted Kennedy.

Kennedy was born in Brookline, Massachusetts, the sixth of nine children born to Rose (née Fitzgerald) and Joseph P. Kennedy, Sr.. She was considered the most sophisticated, yet also the most introverted, of her parents' five daughters. Since childhood she had a fascination with travel and Hollywood. In time she would become a world traveler, so much so that as a young girl she was given assignments by the independent and foreign press to write of her travels. Her ongoing fascination with Hollywood was fueled by her father's stories and adventures there as a movie mogul heading RKO Pictures. After graduating from Rosemont College, she moved to Hollywood in hopes of becoming a movie producer and director like her father.

Her father apparently believed that she could do as much, once saying, "Pat is the one with head for business. She could really run this town if she put her mind to it."[2] However, because she was a woman in the very conservative 1950s, she was restricted to working as production assistant on patriotic and religious productions such as singer Kate Smith's radio program and Father Peyton's Family Rosary Crusade.

She met English actor Peter Lawford through her sister Eunice in the 1940s. They met again in 1949, and again in 1953. They courted briefly and officially announced their engagement in February 1954. They married on April 24, 1954, at the Roman Catholic Church of St. Thomas More in New York City, twelve days before her thirtieth birthday. They settled in Santa Monica, California, and often socialized with actress Judy Garland and her family. Garland gave birth to her son Joseph at the same hospital and on the same day Kennedy gave birth to her son Christopher.

The couple had four children, all born in Santa Monica, California:

Despite the glamorous persona Lawford presented, their relationship suffered strains as early as their brief engagement. Lawford had difficulty adjusting to Kennedy's steadfast Catholicism and her family's larger-than-life image. Kennedy could not tolerate Lawford's heavy drinking, extramarital affairs, and gradual addiction to drugs. Shortly after her brother Jack's death, she filed for a legal separation, and the couple were officially divorced in February 1966. She never remarried. 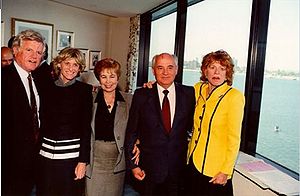 After her divorce, Kennedy battled alcoholism and suffered from tongue cancer. She worked with the John F. Kennedy Library and Museum, as well as with the National Center on Addiction, and was a founder of the National Committee for the Literary Arts, for which she arranged a series of author lectures and scholarships.

Kennedy died at the age of 82 on September 17, 2006 in her Manhattan home from pneumonia. She was survived by her four children and ten grandchildren, as well as her sisters Eunice and Jean, and her brother Ted (who died in 2009). She was buried in Southampton Cemetery.[3]