Patricia Stephens Due (December 9, 1939 – February 7, 2012)[1][2] was one of the leading African-American civil rights activists in the United States, especially in her home state of Florida. Along with her sister Priscilla and others trained in nonviolent protest by CORE, Due spent 49 days in one of the nation's first jail-in, refusing to pay a fine for sitting in a Woolworth's "White only" lunch counter in Tallahassee, Florida in 1960.[3] Her eyes were damaged by tear gas used by police on students marching to protest such arrests, and she wore dark glasses for the rest of her life. She served in many leadership roles in CORE and the NAACP, fighting against segregated stores, buses, theaters, schools, restaurants, and hotels, protesting unjust laws, and leading one of the most dangerous voter registration efforts in the country in northern Florida in the 1960s.[4]

With her daughter, Tananarive, Due wrote Freedom in the Family: a Mother-Daughter Memoir of the Fight for Civil Rights, documenting the struggle she participated in, initially as a student at Florida A&M University, and later working for civil rights organizations and Florida communities, sometimes in partnership with her husband, civil rights attorney John D. Due, Jr.

Patricia Stephens was born on December 9, 1939 in Quincy, Florida to Lottie Mae (née Powell) and Horace Walter Stephens. She was the second of three children. In 1963, she married Florida A&M University (FAMU) law student John D. Due, Jr., who went on to become a prominent civil rights attorney.[5] The couple had three daughters.[4]

Due's university studies were repeatedly interrupted by protests and arrests that sometimes got her suspended, as well as speaking and fund-raising tours. Though she entered Florida A&M University in 1957, she did not receive her degree until 1967.[1]

Due and her sister Priscilla started fighting segregation when Due was 13 by insisting on being served at the "white only" window of their local Dairy Queen, instead of the "colored" window.[1] 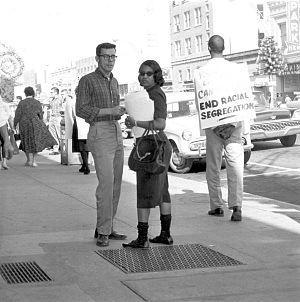 Patricia Stephens (in sunglasses) in a boycott and picketing of downtown stores: Tallahassee, Florida. December 1960.

During the summer of 1959, the sisters attended a nonviolent resistance workshop organized by the Congress of Racial Equality (CORE). On February 20, 1960, eleven FAMU students, including Patricia and Priscilla, were arrested for ordering food at a "white only" Woolworth lunch counter. On March 12, dozens of FAMU and Florida State University students who participated in sit-ins at McCrory’s and Woolworth’s were arrested. A thousand students began marching from the FAMU campus toward downtown Tallahassee, but were stopped by Police officers with teargas. At the head of the march, Due was teargassed right in the face, and suffered permanent eye damage.[citation needed]

The "jail-in" gained nationwide attention, and the students received a supportive telegram from Dr. Martin Luther King, Jr.. Due sent a letter to baseball pioneer Jackie Robinson, who published it in a column he wrote. Robinson later sent the jailed students diaries so they could write down their experiences. After the jail-in, Due and the others traveled the country in speaking tours to publicize the civil rights movement. She met with such luminaries as Eleanor Roosevelt and author James Baldwin, and would be jailed on numerous occasions as a leader in the movement.[4]

Patricia Stephens Due died in 2012, aged 72, following a battle with cancer.[where?]

In 2008, the National Hook-Up of Black Women Inc. honored Due at its national convention.[7]

Works about Patricia Stephens Due