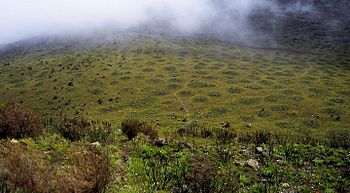 The patterned ground below Mugi Hill on Mount Kenya occurs in an area of alpine permafrost.

Patterned ground is the distinct, and often symmetrical geometric shapes formed by ground material in periglacial regions. Typically found in remote regions of the Arctic, Antarctica, and the Australian outback, but also found anywhere that freezing and thawing of soil alternate; patterned ground has also been observed on Mars.[1] The geometric shapes and patterns associated with patterned ground are often mistaken as artistic human creations. The nature of patterned ground had long puzzled scientists but the introduction of computer-generated geological models in the past 20 years has allowed scientists to relate the formation of these features to phenomena associated with frost heaving, which refers to expansion that occurs when wet, fine-grained, and porous soils freeze.

Patterned ground can be found in a variety of forms. Typically, the type of patterned ground in a given area is related to the prevalence of larger stones in local soils and the frequency of freeze-thaw cycles. 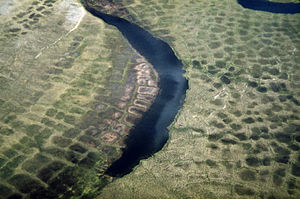 Polygons can form either in permafrost areas (as ice wedges) or in areas that are affected by seasonal frost. The rocks that make up these raised stone rings typically decrease in size with depth. In the northern reaches of the Canadian Boreal forests, when bogs reach a eutrophic climax and create a sedge mat, Tamarack Larch and Black Spruce are often the early colonists within such a polygonal climax sedge mat.[2] 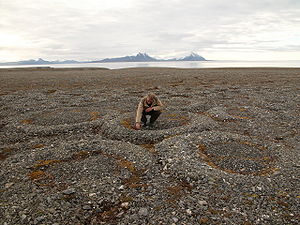 Steps can be developed from circles and polygons. This form of patterned ground is generally a terrace-like feature that has a border of either larger stones or vegetation on the downslope side, and can consist of either sorted or unsorted material.

Patterned ground in the polar region of Mars.

In periglacial areas and areas affected by seasonal frost, repeated freezing and thawing of groundwater forces larger stones toward the surface as smaller stones flow and settle underneath larger stones (see "Cryoturbation"). At the surface, areas that are rich in larger stones contain much less water than highly porous areas of finer grained sediments. These water saturated areas of finer sediments have a much greater ability to expand and contract as freezing and thawing occur, leading to lateral forces which ultimately pile larger stones into clusters and stripes. Through time, repeated freeze-thaw cycles smooth out irregularities and odd-shaped piles to form the common polygons, circles, and stripes of patterned ground.

Patterned ground occurs in alpine areas with permafrost. For example, on Mount Kenya permafrost is a few centimetres (inches) below the surface in places. Patterned ground is present at 3,400 metres (11,155 ft) to the west of Mugi Hill.[3] These mounds grow because of the repeated freezing and thawing of the ground drawing in more water. There are blockfields present around 4,000 metres (13,123 ft) where the ground has cracked to form hexagons. Solifluction occurs when the night temperatures freeze the soil before it thaws again in the morning. This daily expansion and contraction of the soil prevents the establishment of vegetation.[4]

Frost also sorts the sediments in the ground. Once the mantle has been weathered, finer particles tend to migrate away from the freezing front, and larger particles migrate through the action of gravity.

Patterned ground forms mostly within the active layer of permafrost.