Paul François de Quelen de La Vauguyon or Paul François de Quélen de Stuer de Caussade, duc de La Vauguyon (30 July 1746, Paris – 14 March 1828, Paris) was a French nobleman. He was governor of Cognac, after having been involved in the last campaigns of the Seven Years' War. He wrote a Portrait de feu monseigneur le Dauphin and was menin to the future Louis XVI, one of the Dauphin's sons. A peer of France, brigadier, maréchal de camp, knight of the ordre du Saint-Esprit, he was chosen to be minister plenipotentiary to the Estates General of the Dutch Republic. He later became French ambassador to Spain, knight of the Golden Fleece, temporary minister of foreign affairs in 1789, then minister of the conseil d'État of Louis XVIII in Verona. He was the main intermediary among Louis's agents in France, but became the victim of intrigues. From the Restoration onwards he was lieutenant général and sat in the peerage of France, where he was noted for his moderation. He and his wife (dame d'honneur to the comtesse de Provence) had four children, but the Quelen line died out with his children.

Vauguyon was descended from an old aristocratic family. His father, Antoine de Quélen de Stuer de Caussade (1706–1772) was the duc de La Vauguyon (1759), prince de Carency, pair de France, Menin to the Dauphin, lieutenant général of the royal armies, governor, first gentleman of the chamber and grand master of the garde-robe to the duke of Burgundy, to the Dauphin and to the counts of Provence and Artois, knight of the ordre du Saint-Esprit and the order of Saint-Louis.

His mother, Marie Françoise de Béthune (1712–1799) was the daughter of the duke of Charost, himself governor to the king's person to Louis XV. 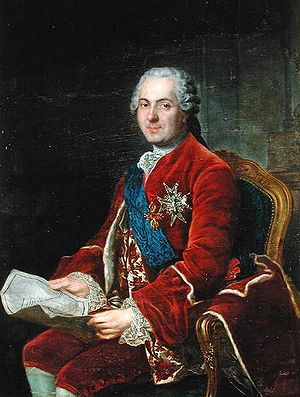 Paul François is known by his father's living, under the name of the duke of Saint-Mégrin. He entered the public service aged 12 and fought in the last campaigns of the Seven Years' War. After the war he was made governor of Cognac and took advantage of the post to write and have published an elogy of Louis XVI's father, entitled Portrait de feu monseigneur le Dauphin. His father had been entrusted with the delicate mission of educating the Dauphin's sons on the Dauphin's death, and Paul himself had been menin to the future Louis XVI. He succeeded his father as a peer of France in 1773.[1]

In 1776, on the recommendation of Vergennes, Louis XVI chose La Vauguyon to be France's representative to the Estates General of the Dutch Republic. On his arrival, the Estates were in a sense under the control of the British government - when he left a solemn deputation from the Estates conveyed him their public recognition for his services and gratitude for the : 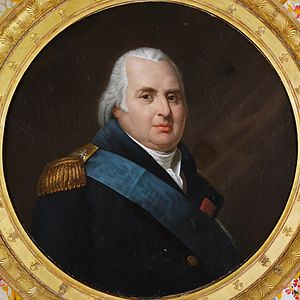 Louis XVIII - La Vauguyon was one of the four ministers who formed his conseil d'État, later becoming a victim of Louis's favourite the count (later duke) of Avaray.

In 1789, La Vauguyon was recalled from Spain by Louis XVI to take possession of the ministry for foreign affairs, as he did on 13 July. He could make the king listen to his advice and found himself under attack from revolutionaries.[3] The Assembly presented new ministers responsible for the events of the 14 July and La Vauguyon gave his resignation on 16 July, having been minister for only three days.

Fearing he would pay for "the short and disastrous honour of his ministry"[4] with his head, he disguised himself as a businessman, took a passport under a false name and fled to Le Havre with his son in the hope of crossing to England. They were both arrested in Le Havre and the case was referred to the National Constituent Assembly on 1 August. After a heated discussion Le Havre received orders to set La Vauguyon free.

The king recalled La Vauguyon to Paris and sent him to Madrid again as ambassador. On 16 May 1790, Charles de Lameth complained that his negotiations were as important as those in the hands of La Vauguyon. Differences had arisen between England and Spain, whose cause may be attributed to La Vauguyon's negotiations by the British minister. He was replaced by Bourgoing on 1 June 1790 but continued to stay in Madrid.[5] The Spanish king granted hospitality to La Vauguyon and his family, granting him properties during the Revolutionary storms and giving his son (the future general La Vauguyon, still a child) a post in the Spanish army.[6]

Around the end of 1795, Louis XVIII summoned Paul François de Quelen de La Vauguyon to Verona to be one of the four ministers that made up his conseil d'État. La Vauguyon followed this prince to Blackembourg. The counter-revolutionary plan to use conciliatory plans and in virtue of which royalists would still accept public posts can be attributed to him, but it proved too soft a plan. La Vauguyon rendered major services to the royal cause during his ministry and was Louis XVIII's main intermediary to his agents in France, notably in the La Ville-Heurnois conspiracy.[7] His time in the conseil d'État ended in February 1797 when, due to courtesans' intrigues, he fell into disgrace with the pretender, who his father had nicknamed "the disingenous". The count of Saint-Priest replaced him.[8] He then stayed for a time in Hamburg before returning to Spain, where he stayed until 1805. In that year he returned to France and lived in retirement until the Bourbon Restoration.

Whilst in exile La Vauguyon was promoted to lieutenant général, on 4 June 1814 he was made duke, prince and lieutenant général by a royal decree, with the dukedom made hereditary. He was summoned to sit in the chambre des pairs, where he was of the chief backers for moderation. Lacking ambition, he lived in great simplicity and was received as a member of the société d'instruction élémentaire, several times being elected its president and putting much zeal into spreading mutual education. A doctor's mistake made an intestinal illness fatal, and he died in 1828.[9]

In his memoirs baronne d’Oberkirch writes that:

She also seems to have been close to Marie-Antoinette and sometimes accompanied her on her nights out at Parisian balls:

Du Barri wrote : The duchess of La Vauguyon was a lady of the wardrobe. Very serious and grave, she had an imposing and severe air, such was the basis of her character. She had much spirit but hid it for fear of exposing her dignity by showing it and of also compromising the superiority of Madame la comtesse de Provence.[12]

He and his wife had two sons and two daughters :