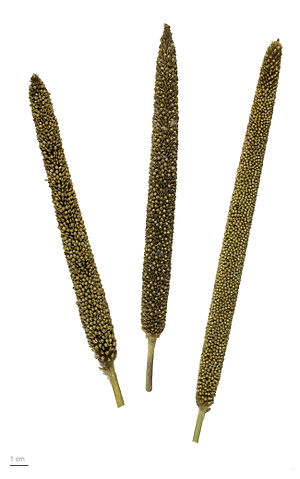 Pearl millet (Pennisetum glaucum) is the most widely grown type of millet. It has been grown in Africa and the Indian subcontinent since prehistoric times. The center of diversity, and suggested area of domestication, for the crop is in the Sahel zone of West Africa. Recent archaeobotanical research has confirmed the presence of domesticated pearl millet on the Sahel zone of northern Mali between 2500 and 2000 BC.[1] Cultivation subsequently spread and moved overseas to India. The earliest archaeological records in India date to around 2000 BC,[2] and it spread rapidly through India reaching South India by 1500 BC, based on evidence from the site of Hallur. Cultivation also spread throughout eastern and southern parts of Africa. Pearl millet is widely grown in the northeastern part of Nigeria (especially in Borno and Yobe states). It is a major source of food to the local villagers of that region. The crop grows easily in that region due to its ability to withstand harsh weather conditions like drought and flood. Records exist for cultivation of pearl millet in the United States in the 1850s, and the crop was introduced into Brazil in the 1960s. 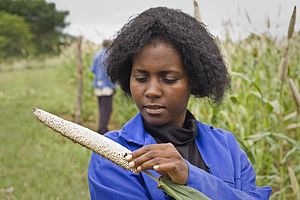 A scientist in Zimbabwe checks a pearl millet crop

Pearl millet is well adapted to growing areas characterized by drought, low soil fertility, and high temperature. It performs well in soils with high salinity or low pH. Because of its tolerance to difficult growing conditions, it can be grown in areas where other cereal crops, such as maize or wheat, would not survive.

Today pearl millet is grown on over 260,000 km2 of land worldwide. It accounts for approximately 50% of the total world production of millets.[3]

Pearl millet around the world

India is the largest producer of pearl millet. Rajasthan is the highest-producing state in India.

Pearl millet is an important food across the Sahel region of Africa. It is a main staple (along with sorghum) in a large region of northern Nigeria, Niger, Mali and Burkina Faso. In Nigeria it is usually grown as an intercrop with sorghum and cowpea, the different growth habits, growth period and drought vulnerability of the three crops maximising total productivity and minimising the risk of total crop failure. It is often ground into a flour, rolled into large balls, parboiled, liquefied into a watery paste using fermented milk, and then consumed as a beverage. This beverage, called "fura" in Hausa, is a popular drink in northern Nigeria and southern Niger.

In Namibia, pearl millet is locally known as "mahangu" and is grown mainly in the north of that country, where it is the staple food. In the dry, unpredictable climate of this area it grows better than alternatives such as maize.

Mahangu is usually made into a porridge called "oshifima" (or "oshithima"), or fermented to make a drink called "ontaku" or "oshikundu". 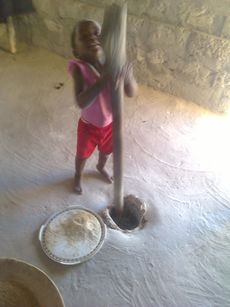 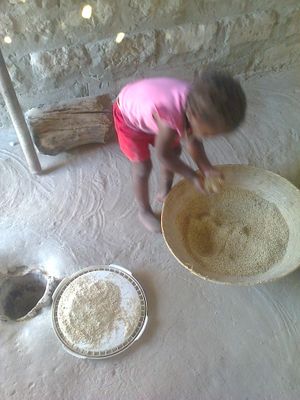 Traditionally the mahangu is pounded with heavy pieces of wood in a 'pounding area'. The floor of the pounding area is covered with a concrete-like coating made from the material of termite mounds. As a result, some sand and grit gets into the pounded mahangu, so products like oshifima are usually swallowed without chewing.[4][not in citation given] After pounding, winnowing may be used to remove the chaff. 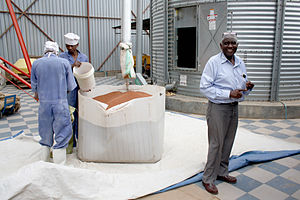 Some industrial grain processing facilities now exist, such as those operated by Namib Mills. Efforts are also being made to develop smaller scale processing using food extrusion and other methods. In a food extruder, the mahangu is milled into a paste before being forced through metal die. Products made this way include breakfast cereals, including puffed grains and porridge, pasta shapes, and "rice".[5][not in citation given]

To combat the problem of micronutrient malnutrition in Africa and Asia, a study of serving iron-biofortified pearl millets which is bred conventionally without genetic modification to a control group is proved to have higher level of iron absorbance by the group.[7]