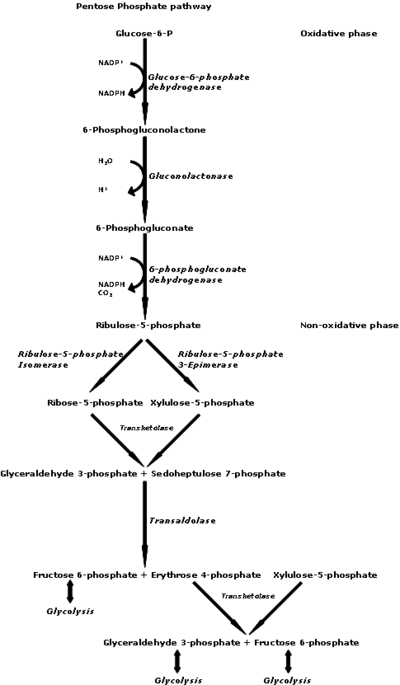 In biochemistry, the pentose phosphate pathway (also called the phosphogluconate pathway and the hexose monophosphate shunt) is a metabolic pathway parallel to glycolysis that generates NADPH and pentoses (5-carbon sugars) as well as Ribose 5-phosphate, a precursor for the synthesis of nucleotides. While it does involve oxidation of glucose, its primary role is anabolic rather than catabolic.

There are two distinct phases in the pathway. The first is the oxidative phase, in which NADPH is generated, and the second is the non-oxidative synthesis of 6-carbon sugars. For most organisms, the pentose phosphate pathway takes place in the cytosol; in plants, most steps take place in plastids.[1]

Similar to glycolysis, the pentose phosphate pathway appears to have a very ancient evolutionary origin. The reactions of this pathway are mostly enzyme-catalyzed in modern cells. They also occur however non-enzymatically under conditions that replicate those of the Archean ocean, and are catalyzed by metal ions, ferrous ions (Fe(II)) in particular.[2] The origins of the pathway could thus date back to the prebiotic world.

The primary results of the pathway are:

Aromatic amino acids, in turn, are precursors for many biosynthetic pathways, including the lignin in wood.[citation needed]

Dietary pentose sugars derived from the digestion of nucleic acids may be metabolized through the pentose phosphate pathway, and the carbon skeletons of dietary carbohydrates may be converted into glycolytic/gluconeogenic intermediates.

In mammals, the PPP occurs exclusively in the cytoplasm, and is found to be most active in the liver, mammary gland and adrenal cortex in the human.[citation needed] The PPP is one of the three main ways the body creates molecules with reducing power, accounting for approximately 60% of NADPH production in humans.[citation needed]

One of the uses of NADPH in the cell is to prevent oxidative stress. It reduces glutathione via glutathione reductase, which converts reactive H2O2 into H2O by glutathione peroxidase. If absent, the H2O2 would be converted to hydroxyl free radicals by Fenton chemistry, which can attack the cell. Erythrocytes, for example, generate a large amount of NADPH through the pentose phosphate pathway to use in the reduction of glutathione.

Hydrogen peroxide is also generated for phagocytes in a process often referred to as a respiratory burst.[3]

In this phase, two molecules of NADP+ are reduced to NADPH, utilizing the energy from the conversion of glucose-6-phosphate into ribulose 5-phosphate.

The entire set of reactions can be summarized as follows:

The overall reaction for this process is:

Glucose-6-phosphate dehydrogenase is the rate-controlling enzyme of this pathway. It is allosterically stimulated by NADP+ and strongly inhibited by NADPH.[4] The ratio of NADPH:NADP+ is normally about 100:1 in liver cytosol[citation needed]. This makes the cytosol a highly-reducing environment. An NADPH-utilizing pathway forms NADP+, which stimulates Glucose-6-phosphate dehydrogenase to produce more NADPH. This step is also inhibited by acetyl CoA.[citation needed]

Erythrocytes and the pentose phosphate pathway

Several deficiencies in the level of activity (not function) of glucose-6-phosphate dehydrogenase have been observed to be associated with resistance to the malarial parasite Plasmodium falciparum among individuals of Mediterranean and African descent. The basis for this resistance may be a weakening of the red cell membrane (the erythrocyte is the host cell for the parasite) such that it cannot sustain the parasitic life cycle long enough for productive growth.[6]