Perry County is a county located in the U.S. state of Pennsylvania. As of the 2010 census, the population was 45,969.[1] The county seat is New Bloomfield.[2] The county was created on March 22, 1820, and was named after Oliver Hazard Perry, a hero of the War of 1812 who had recently died.[3] It was originally part of Cumberland County and was created in part because residents did not want to travel over the mountain to Carlisle (the county seat of Cumberland County).

In 2010, the center of population of Pennsylvania was located in the eastern end of Perry County.[4] Green Park, an incorporated village located in northeastern Tyrone Township, serves as Perry County’s midpoint between the Conococheague Mountain in the west and the Susquehanna River to the east.[5]

There were 16,695 households out of which 33.2% had children under the age of 18 living with them, 61.6% were married couples living together, 7.8% had a female householder with no husband present, and 26.20% were non-families. 21.7% of all households were made up of individuals and 9.30% had someone living alone who was 65 years of age or older. The average household size was 2.58 and the average family size was 3.01. There is also a high population of Amish. 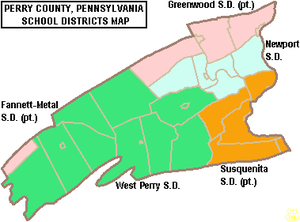 The county is home to four weekly newspapers, three published by Advance Publications of Perry and Juniata Counties, Inc. associated with The Patriot-News of Harrisburg: Duncannon Record, The News-Sun and Perry County Times and the separate Perry County Weekly published by The Sentinel in Carlisle, Cumberland County, by Lee Enterprises of Davenport, Iowa [3].[19] 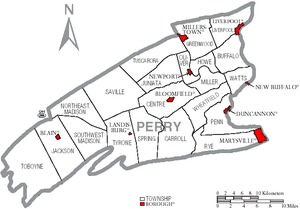 Under Pennsylvania law, there are four types of incorporated municipalities: cities, boroughs, townships, and, in at most two cases, towns. The following boroughs and townships are located in Perry County: