Personal income in the United States 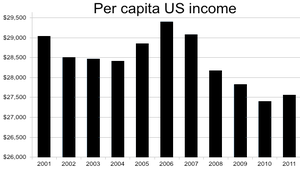 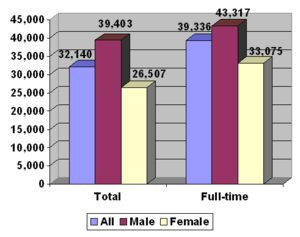 Personal income is an individual's total earnings from wages, investment interest, and other sources. In the United States the most widely cited personal income statistics are the Bureau of Economic Analysis's personal income and the Census Bureau's per capita money income. The two statistics spring from different traditions of measurement—personal income from national economic accounts and money income from household surveys. BEA's statistics relate personal income to measures of production, including GDP, and is considered an indicator of consumer spending. Census's statistics provide detail on income distribution and demographics and are used to produce the nation's official poverty statistics. Inflation-adjusted ("real") per-capita disposable personal income rose steadily in the U.S. from 1945 to 2008, but has since remained generally level.[2][3]

Income patterns are evident on the basis of age, sex, race and educational characteristics. In 2005 roughly half of all those with graduate degrees were among the nation's top 15% of income earners. Among different demographics (marital status, race, gender) for those over the age of 18, median personal income ranged from $3,317 for an unemployed, married Asian American female[4] to $55,935 for a full-time, year-round employed Asian American male.[5] According to the US Census men tended to have higher income than women while Asians and Whites earned more than African Americans and Hispanics. The overall median personal income for all individuals over the age of 18 was $24,062[6] ($32,140 for those age 25 or above) in the year 2005.[7] The overall median income for all 155 million persons over the age of 15 who worked with earnings in 2005 was $28,567.[8]

Income from production is generated both by the labor of individuals (for example, in the form of wages and salaries and of proprietors' income) and by the capital that they own (in the form of rental income of persons). Income that is not earned from production in the current period—such as capital gains, which relate to changes in the price of assets over time—is excluded.

BEA's monthly personal income estimates are one of several key macroeconomic indicators that the National Bureau of Economic Research considers when dating the business cycle.

The Census Bureau collects income data on several major surveys, including the Annual Social and Economic Supplement (ASEC) of the Current Population Survey (CPS), the Survey of Income and Program Participation (SIPP), and the American Community Survey (ACS). The CPS is the source of the official national estimates of poverty and the most widely cited source of annual household income estimates for the United States.[10]

The CPS measure of money income is defined as the total pre-tax cash income received by people on a regular basis, excluding certain lump-sum payments and excluding capital gains.

The Census Bureau also produces alternative estimates of income and poverty based on broadened definitions of income that include many of these income components that are not included in money income.

The Census Bureau releases estimates of household money income as medians, percent distributions by income categories, and on a per capita basis. Estimates are available by demographic characteristics of householders and by the composition of households. More details on income concepts and sources are found on the Census Bureau's website.

File:Historical median personal income by education attainment in the US.png

Of those individuals with income who were older than 15 years of age, 48% had incomes below $25,000 while the top 10.43% had incomes exceeding $82,500 a year in 2010. The distribution of income among individuals differs substantially from household incomes as 39% of all households had two or more income earners. As a result, 20.4% of households have six figure incomes, even though only 6.61% of Americans had incomes exceeding $100,000 in 2010. The following chart shows the income distribution among all 243,955,000 individuals aged 15 or higher who received income in 2010 as recorded by the United States Census Bureau.[12]

File:Age personal income.png
Income distribution among all those above age 25 and those between 25 and 64 with earnings.[12][13] NOTE: 25+ statistics will not add up exactly to 100% due to the unemployment rate

Over time, by race and sex

This chart is median income of 15 year olds or older, who have non-zero income.[14] Amounts are shown in nominal dollars and in real dollars in parentheses, 2004 dollars.

By race and origin

Personal income varied significantly with an individual's racial characteristics with racial discrepancies having remained largely stagnant since 1996. Overall, Asian Americans enjoyed higher median personal incomes than any other racial demographic. Asian Americans had a median income roughly ten percent higher than that of Whites.[15] The only exception was among the holders of graduate degrees who constitute 8.9% of the population. Among those with a Master's, Professional or Doctorate degree those who identified as White had the highest median individual income. This racial income gap was relatively small.[15][16]

Those identifying as Hispanic or Latino (who may have been of any "race") had the lowest overall median personal income, earning 28.51% less than Whites[16][17] and 35% less than Asian Americans.[15] The second largest racial or ethnic gap was between Whites and African Americans with the former earning roughly 22% more than the latter. Thus one can observe a significant discrepancy with the median income of Asians and Whites and that of African Americans and Hispanics.[18]