Detail on a pewter fork handle from Norway, showing three scenes: King Olaf II of Norway, his men, and a Viking ship

Pewter is a malleable metal alloy, traditionally 85–99% tin, with the remainder consisting of copper, antimony, bismuth and sometimes, less commonly today, lead. Silver is also sometimes used. Copper and antimony act as hardeners while lead is common in the lower grades of pewter, which have a bluish tint. It has a low melting point, around 170–230 °C (338–446 °F), depending on the exact mixture of metals.[1] The word pewter is probably a variation of the word spelter, a term for zinc alloys (originally a colloquial name for zinc).[2]

Pewter was first used around the beginning of the Bronze Age in the Near East. The earliest piece of pewter found is from an Egyptian tomb from 1450 BC.[3] 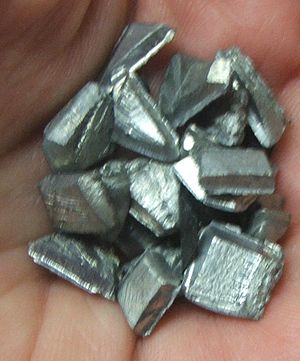 The constituents of pewter were first controlled in the 12th century by town guilds in France. By the 15th century, the Worshipful Company of Pewterers controlled pewter constituents in England. This company originally had two grades of pewter, but in the 16th century a third grade was added. The first type, known as "fine metal", was used for tableware. It consisted of tin with as much copper as it could absorb, which is about 1%. The second type, known as "trifling metal" or "trifle", was used for holloware and is made up of fine metal with approximately 4% lead. The last type of pewter, known as "lay" or "ley" metal, was used for items that were not in contact with food or drink. It consisted of tin with 15% lead. These three alloys were used, with little variation, until the 20th century.[3]

Older pewters with higher lead content are heavier, tarnish faster, and oxidation gives them a darker silver-gray color.[citation needed] Pewters containing lead are no longer used in items (such as cups, plates, or jewelry) that will come in contact with the human body due to health concerns stemming from the lead content. Modern pewters are available that are completely free of lead, although many pewters containing lead are still being produced for other purposes.[citation needed]

Pewter was used in the ancient world by the Egyptians and later the Romans, and came into extensive use in Europe from the Middle Ages[4] until the various developments in pottery and glass-making during the 18th and 19th centuries. Pewter items are often found in churches. Pewter was the chief tableware until the making of porcelain. Mass production of pottery, porcelain and glass products has seen pewter universally replaced in day-to-day life. Pewter artifacts continue to be produced, mainly as decorative or specialty items. Pewter was also used around East Asia. Although some items still exist,[5] Ancient Roman pewter is rare.[6]

"Unlidded" mugs and lidded tankards may be the most familiar pewter artifacts from the late 17th and 18th centuries, although the metal was also used for many other items including porringers, plates, dishes, basins, spoons, measures, flagons, communion cups, teapots, sugar bowls, beer steins, and cream jugs. In the early 19th century, changes in fashion caused a decline in the use of pewter flatware. At the same time, production increased of both cast and spun pewter tea sets, whale-oil lamps, candlesticks, and so on. Later in the century, pewter alloys were often used as a base metal for silver-plated objects.[citation needed]

In the late 19th century, pewter came back into fashion with the revival of medieval objects for decoration. New replicas of Medieval pewter objects were created, and collected for decoration. Today, pewter is used in decorative objects, mainly collectible statuettes and figurines, game figures, aircraft and other models, (replica) coins, pendants, plated jewellery and so on. Certain athletic contests, such as the United States Figure Skating Championships, award pewter medals to the fourth-place finishers.[7]