Philippi (pronounced 'FILL-uh-pea') is a city in — and the county seat of — Barbour County, West Virginia, USA.[6] The population was 2,966 at the 2010 census. In 1861, the city was the site of the Battle of Philippi, known as "The Philippi Races". Although a minor skirmish, this is considered the earliest notable land action of the American Civil War.

Philippi is the home of Alderson Broaddus University, a four-year liberal-arts school affiliated with the American Baptist Churches.

The city has a weekly newspaper, The Barbour Democrat. 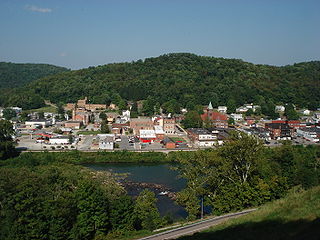 Philippi, West Virginia, USA, from across the Tygart Valley River. This 2007 view includes the Philippi Historic District and the Barbour County Courthouse (just right of center).

Philippi is located along the Tygart Valley River at Lua error in Module:Coordinates at line 668: callParserFunction: function "#coordinates" was not found. (39.151569, -80.043472).[7] It is within Philippi District — one of eight magisterial districts of Barbour County. The town is sub-divided into Wards 1 through 4.

The original settlement that became the town of Philippi was on a section of bottomland at a bend in the river at the mouth of Anglin's Run. (This area was later designated "Dayton Park".) Opposite this bottomland, at the western landing of "Booth's Ferry", is a sharp ridge which breaks abruptly down to the river and is still known as "Nobusiness Hill". Most of the town is located in the bottomland, but a portion, including the university campus, is on another ridge — "Battle Hill" — overlooking the valley from the northwest.

A railroad line runs through Philippi, now used only by freight trains, passenger rail service having been discontinued in 1956. (The passenger station is now a museum.) The town is served by the small, private Philippi-Barbour County Regional Airport.

The climate in this area is characterized by hot, humid summers and generally mild to cool winters. According to the Köppen Climate Classification system, Philippi has a humid subtropical climate, abbreviated "Cfa" on climate maps.[8]

There were 1,185 households of which 26.0% had children under the age of 18 living with them, 38.6% were married couples living together, 14.5% had a female householder with no husband present, 4.8% had a male householder with no wife present, and 42.1% were non-families. 36.3% of all households were made up of individuals and 15% had someone living alone who was 65 years of age or older. The average household size was 2.16 and the average family size was 2.78.

The racial makeup of the city was 94.77% White, 1.11% African American, 1.05% Native American, 0.87% Asian, 0.03% Pacific Islander, 0.42% from other races, and 1.74% from two or more races. Hispanics or Latinos of any race were 0.80% of the population. In addition, the area has a significant population of racially mixed (though often light-skinned and blue-eyed) people, known locally as 'the Chestnut Ridge people', whose specific origins are uncertain. They are categorized by many scholars among the Melungeons found scattered throughout Appalachia.

There were 1,119 households out of which 27.4% had children under the age of 18 living with them, 44.7% were married couples living together, 11.3% had a female householder with no husband present, and 40.3% were non-families. 36.9% of all households were made up of individuals and 19.6% had someone living alone who was 65 years of age or older. The average household size was 2.25 and the average family size was 2.92.

The first white settlement in present-day Barbour County was established about 3 miles downriver from the future site of Philippi in 1780, at which time the area was still part of western Virginia and included within Monongalia County. The earliest settlers on the section of bottomland that would one day become Philippi were William Anglin (as early as 1783 or '84) and Daniel Booth (1787). A ford existed here as early as 1789 which served the road that had recently been surveyed between Beverly and Sandy Creek. Anglin was the original owner of the land upon which Philippi stands, hence the earliest known name for the locality — Anglin's Ford. Booth also owned and operated a commercial ferry here from about 1800, thus the area's second popular designation — Booth's Ferry.[11] William Friend Wilson married Booth's daughter and built a wool and grain mill on the river in 1818.

In March 1843, the vast Monongalia County of western Virginia was carved up into several smaller political units, among them Barbour County, which included Booth's Ferry. In 1899, Hu Maxwell described the April 1843 founding and official naming of the new county seat:

"The county seat of Barbour was located at the place where Philippi now stands before there was a town and before the place was named. It was then a farm belonging to William F. Wilson, and the locality had long been known as Booth's Ferry. The land was first the property of William Anglin, and in succession was owned by John Wilson, Daniel Booth, Ely Butcher, Elmore Hart, Thomas H. Hite and William F. Wilson, who divided it into lots and disposed of the most of it within a few years of the establishing of the county seat. The county was named after [the Virginia lawyer and jurist] Philip Pendleton Barbour, and it was the intention of the county court when it selected a name for the town to honor the given name of Mr. Barbour; giving it the feminine form, however, in conformity with the Latin language. The feminine of Philip is Philippa, and it was meant that such should be the name of the town. But because of misspellings and a misunderstanding of the origin of the name (confounding it with Philippi, an ancient city) the name finally took the form which it now has. On April 5, 1843, the third day of the first county court, it is 'ordered that the county seat of this county be known and called PHILLIPPA'. Except that the name has too many 'l's' the form was proper, according to what was originally intended. Later the name became Philippi, but even then it was oftener misspelled than spelled correctly."[12]

As Maxwell implies, St Paul's Epistle to the Philippians and the ancient Battle of Philippi were no doubt influential in the final form of the name. Philippi was established by charter in 1844.

In 1852 Lemuel Chenoweth, an Appalachian architect and carpenter, built a covered bridge in Philippi to provide a link on the turnpike running between Beverly and Fairmont. The Philippi Covered Bridge spelled the end of the commercial ferry operation and is still the town's prominent landmark. 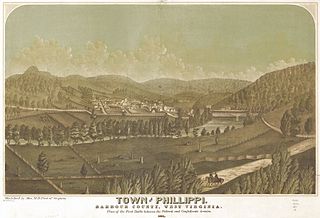 Philippi was the scene of the first land battle of the American Civil War, on June 3, 1861. The battle was promptly lampooned as the "Philippi Races" because of the hurried retreat by the Confederate troops encamped in the town. The battle is reenacted every June during the town's 'Blue and Gray Reunion.'

At daylight on June 3, two columns of Union forces under the command of Col. Benjamin Franklin Kelley and Col. Ebenezer Dumont, with perhaps 3,000 men, arrived from Grafton and attacked about 800 poorly armed Confederate recruits under the command of Col. George A. Porterfield. The Union troops had marched all night through a heavy rain storm to arrive just before daylight. The surprise attack — from the heights of "Battle Hill" to the northwest — awakened the sleeping Confederates. After firing a few shots at the advancing Union troops, the Southerners broke lines and began running frantically to the south, some still in their bed clothes.

The Union victory in a relatively bloodless battle propelled the young Major General George B. McClellan into the national spotlight, and he was soon be given command of all Union armies. The battle also inspired more vocal protests in the Western part of Virginia against secession. A few days later in Wheeling, the Wheeling Convention nullified the Virginia ordinance of secession and named Francis H. Pierpont governor. These events eventually resulted in the separate statehood of West Virginia. 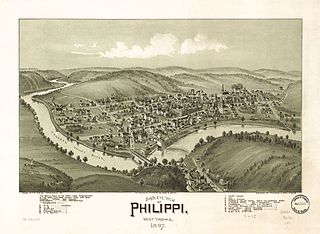 Philippi was incorporated by act of the West Virginia Legislature on 1 February 1871. The first railroad — the Grafton and Greenbrier, a narrow gauge — arrived at Philippi on 25 January 1884. Three years later the line was extended to Belington and in 1891 it became a standard gauge when it was acquired by the B&O. Rail activity at Philippi peaked in the 1920s when as many as six passenger trains, along with mail and freight, transited the town daily. The automobile brought about a decline in the railroad, however, and the final passenger train made its last stop in town in 1956.[13]

In 1905 a new Barbour County Courthouse was completed. It was designed by J. Charles Fulton in a monumental Romanesque Revival style. The building contractor was J.P. Conn.

Throughout its history, Philippi has suffered from floods because of its proximity to the river and the relatively low elevation of most of the town. The most damaging of these came in November 1985. The town has since adopted a flood plain management plan.

Four miners from Barbour County were killed in the 2006 Sago mine disaster, three of whom were from Philippi. 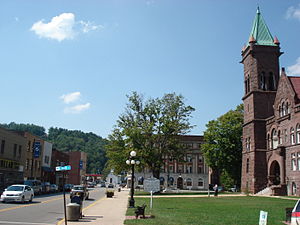 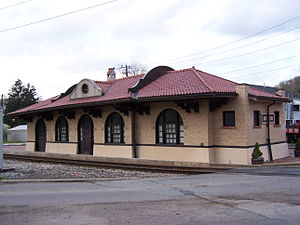 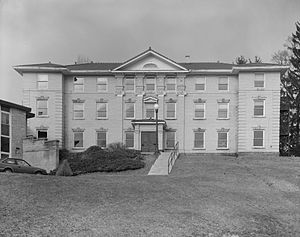 Whitescarver Hall (1912) on the campus of Alderson-Broaddus University, Philippi.

Philippi's economy was originally based on coal mining and the railroad industry, but both have declined severely since the mid-20th century. The town's major employers now include Alderson-Broaddus University and Broaddus Hospital. Many inhabitants work in the service industry, education, and family farming.

The city government provides many services and jobs to stimulate the local economy, including water, electric, digital cable, internet, garbage collection, and waste water treatment facilities. In addition, a professional police and volunteer fire department are provided. The City of Philippi was voted as a 2004 "All American City".