The Philippine Dynasty, also known as the House of Habsburg in Portugal, was the third royal house of Portugal. It was named after the three Spanish kings who ruled Portugal between 1581 and 1640 in a dynastic union of the two crowns. The three kings, all named Philip (Spanish: Felipe; Portuguese: Filipe, Portuguese pronunciation: [fɨˈlip(ɨ)]), were from the House of Habsburg.

The history of Portugal from the dynastic crisis in 1580 to the House of Braganza monarchs is a period of transition. The Portuguese Empire spice trade was near its height at the start of this period. It continued to enjoy widespread influence after Vasco da Gama had finally reached the East by sailing around Africa in 1497–1498. Vasco da Gama's achievement completed the exploratory efforts inaugurated by Henry the Navigator, and opened an oceanic route for the profitable spice trade into Europe that bypassed the Middle East.

Throughout the 17th century, the increasing predations and surrounding of Portuguese trading posts in the East by the Dutch, English and French, and their rapidly growing intrusion into the Atlantic slave trade, undermined Portugal's near monopoly on the lucrative oceanic spice and slave trades. This sent the Portuguese spice trade into a long decline. To a lesser extent the diversion of wealth from Portugal by the Habsburg monarchy to help support the Catholic side of the Thirty Years' War, also created strains within the union, although Portugal did benefit from Spanish military power in helping to retain Brazil and in disrupting Dutch trade. These events, and those that occurred at the end of the House of Aviz and the period of the Iberian Union, led Portugal to a state of dependency on its colonies, first India and then Brazil.

The continuity in the administrative system 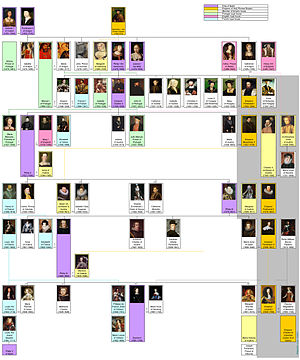 Due to the complexity in the management of government, the Spanish Monarch needed some auxiliary bodies, as the Councils (Consejos), dedicated to the advice and resolution of problems, and submitted to the Monarch's knowledge and dictum. This complexity needed a permanent seat, and the king Philip II of Spain established in 1562 the permanent capital in Madrid, seat of the Royal Court and of the administrative staff.[1][2][3][4] although transferred-in Valladolid, with the whole administrative staff, during a brief period (1601–1606).[5]

As for the functioning, the administrative correspondence came to the different Councils, to Madrid, then the secretary of every Council arranged the material that had to deliver for the attention of the king, and later the King assembled with the secretaries requesting the opinion of the Council. After that, the Council answered afterwards a session to treat the issue and to raise the formal consultation to the monarch. The secretary raise the consultation to the king, and was returned to the Council with his response to be executed. The meetings of the Councils took place in the royal palace, and they did not count on the presence of the king habitually. In this polisynodial system[6] stood out for its importance, the Consejo de Estado (Council of State). The Consejo de Estado in Madrid, entrusted to declare on the major decisions that concerned the organization and the defense of the ensamble of the Hispanic monarchy, and it had frequently that to get into Portuguese matters. Even, the Council of War (Consejo de Guerra) exercised its jurisdiction on the troops placed in the Castilian strongholds established on the Portuguese littoral.

Relating to the particular government of the kingdom of Portugal itself. During the union of the kingdom of Portugal to the Spanish monarchy, the Spanish Hasburgs on the whole respected the pledges made at Thomar in 1581 to allow considerable Portuguese autonomy and to respected the territories of its empire. Public offices were reserved for Portuguese subjects at home and overseas. The king was represented at Lisbon sometimes by a governor and sometimes by a viceroy. So, Spain left the administration of Portugal and its empire largely to the Portuguese themselves, under general supervision from Madrid channeled through a viceroy in Lisbon. Important matters, however, were referred to Madrid, where they came before the Council of Portugal. In the kingdom of Portugal, the polisynodial system is reinforced:

Nevertheless, the political conjuncture need urgent reactions, and in this context a system of meetings appeared for specific issues, as the Junta for the reform of the Council of Portugal (1606–1607, 1610), the Junta for the classification of the debts to the treasury (since 1627) or the Juntas for the organization of the navies of succor of Brazil (since 1637)...[8]

The joining of the two crowns deprived Portugal of a separate foreign policy, and Spain's enemies became Portugal's. England had been an ally of Portugal since the Treaty of Windsor in 1386. War between Spain and England led to a deterioration of the relations with Portugal's oldest ally, and the loss of Hormuz. English help provided by Elizabeth I of England in a rebellion against the kings assured the survival of the alliance. War with the Dutch led to invasions of many countries in Asia, including Ceylon (today's Sri Lanka), and commercial interests in Japan, Africa (Mina), and South America. Even though the Portuguese were unable to capture the entire island of Ceylon, they were able to keep the coastal regions of Ceylon under their control for a considerable time. Brazil was partially conquered by both France and the Seventeen Provinces.

In the 17th, taking advantage of this period of Portuguese weakness, many Portuguese territories in Brazil were occupied by the Dutch who gained access to the sugarcane plantations. John Maurice, Prince of Nassau-Siegen was appointed as the governor of the Dutch possessions in Brazil in 1637 by the Dutch West India Company. He landed at Recife, the port of Pernambuco, in January 1637. By a series of successful expeditions, he gradually extended the Dutch possessions from Sergipe on the south to São Luís de Maranhão in the north. He likewise conquered the Portuguese possessions of Elmina Castle, Saint Thomas, and Luanda, Angola, on the west coast of Africa. After the dissolution of the Iberian Union in 1640, Portugal would reestablish its authority over the lost territories of the Portuguese Empire. The Dutch intrusion into Brazil was long lasting and troublesome to Portugal. The Seventeen Provinces captured a large portion of the Brazilian coast including Bahia (and its capital Salvador), Pernambuco (and its capital Recife), Paraíba, Rio Grande do Norte, Ceará, and Sergipe, while Dutch privateers sacked Portuguese ships in both the Atlantic and Indian Oceans. The large area of Bahia and its city, the strategically important Salvador, was recovered quickly by a powerful Iberian military expedition in 1625. This laid the foundations for the recovery of remaining Dutch controlled areas. The other smaller, less developed areas were recovered in stages and relieved of Dutch piracy in the next two decades by local resistance and Portuguese expeditions.

On the other hand, the Iberian Union opened to both countries a worldwide span of control, as Portugal dominated the African and Asian coasts that surrounded the Indian Ocean, and Spain the Pacific Ocean and both sides of Central and South America, while both shared the Atlantic Ocean space.

Decline of the Habsburg Empire and revolt of Portugal

When Philip II of Portugal (Philip III of Spain) died, he was succeeded by Philip III (and IV of Spain) who had a different approach on Portuguese issues. Taxes raised affected mainly the Portuguese merchants (Carmo Reis 1987). The Portuguese nobility began to lose its importance at the Spanish Cortes, and government posts in Portugal were occupied by Spaniards. Ultimately, Philip III tried to make Portugal a royal province, and Portuguese nobles lost all of their power.

This situation culminated in a revolution by the nobility and high bourgeoisie on December 1, 1640, 60 years after the crowning of Philip I. The plot was planned by Antão Vaz de Almada, Miguel de Almeida and João Pinto Ribeiro. They, together with several associates, killed Secretary of State Miguel de Vasconcelos and imprisoned the king's cousin, the Duchess of Mantua, who had governed Portugal in his name. The moment was well chosen, as Philip's troops were at the time fighting the Thirty Years' War and also facing a revolution in Catalonia.

The support of the people became apparent almost immediately and soon John, 8th Duke of Braganza, was acclaimed King of Portugal throughout the country as John IV. By December 2, 1640, John had already sent a letter to the Municipal Chamber of Évora as sovereign of the country. 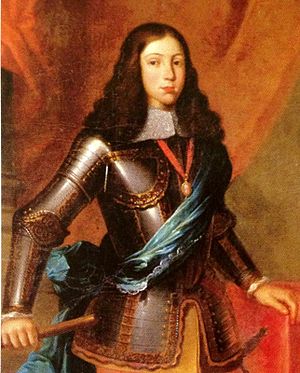 Several decisions made by John IV to strengthen his forces made these victories possible. On December 11, 1640, the Council of War was created to organize all the operations.[9] Next, the king created the Junta of the Frontiers, to take care of the fortresses near the border, the hypothetical defense of Lisbon, and the garrisons and sea ports. In December 1641, a tenancy was created to assure upgrades on all fortresses that would be paid with regional taxes. John IV also organized the army, established the Military Laws of King Sebastian, and developed intense diplomatic activity focused on restoring good relations with England.

After gaining several decisive victories, John quickly tried to make peace. His demand that Philip recognize the new ruling dynasty in Portugal was not fulfilled until the reign of his son Afonso VI during the regency of Afonso's brother Infante Pedro (later King Pedro II of Portugal).

Origins of the House of Braganza

John IV was a beloved monarch, a patron of fine art and music, and a proficient composer and writer on musical subjects. He collected one of the largest libraries in the world.[10] Among his writings is a defense of Palestrina and a Defense of Modern Music (Lisbon, 1649). Abroad, the Dutch took Malacca (January 1641) and the Sultan of Oman captured Muscat (1648). By 1654, however, most of Brazil was back in Portuguese hands and had effectively ceased to be a viable Dutch colony. John died in 1656, and his widow, Luisa of Guzman, married their daughter Catherine to Charles II of England in 1661 while she was regent for their son Afonso VI. Her dowry consisted of Tangier, Bombay and £1,000,000 sterling, making it the largest dowry ever brought by a queen consort. John IV was succeeded by his son Afonso VI.

Monarchs of the House of Habsburg

Coats of arms of Titles held by the House of Habsburg