Phobos And Deimos & Mars Environment (PADME) is a proposed low-cost NASA Mars orbiter mission that would address longstanding unknowns about Mars' two moons Phobos and Deimos and their environment.[1][2][3][4][5]

The origin of Mars' satellites, which were discovered by astronomer Asaph Hall, remains unknown. PADME would advance the scientific understanding of the origin of Phobos and Deimos by studying:[3][5]

Once in Mars orbit, PADME would carry out 16 flybys of Phobos followed by 9 flybys of Deimos.[5] Flybys would take place at two-week intervals. Flyby altitudes at closest approach to Phobos and Deimos would be ~2 km.[5] Following completion of its primary mission, PADME could remain in high Mars orbit for long-term monitoring of the martian system and search for potential additional moonlets around Mars. Alternatively, PADME could be made to escape Mars and eventually fly by a Near-Earth Object (NEO).[5] 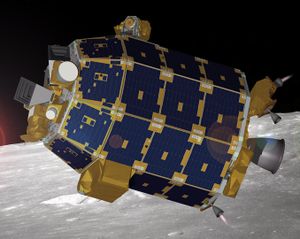 The PADME mission has four science instruments plus a radio science experiment which uses the spacecraft's radio communications system.[5]

The orbiter could also carry an optional laser communications experiment.[5]

PADME could launch on a Falcon 9-class launch vehicle.[5] The spacecraft would fit within all Atlas V, Delta IV, and Falcon 9 launch vehicle fairings. If selected, PADME would launch in August 2020 and reach Mars seven months later, by March 2021.[5]

PADME includes the participation of scientists from Belgium, France, Italy, and Japan.[3][4][5]