From Infogalactic: the planetary knowledge core
Jump to: navigation, search
"Physiography" redirects here. It may also refer to geomorphology.. 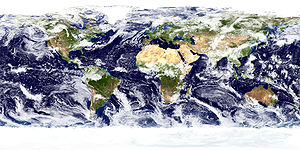 Physical geography (also known as geosystems or physiography) is one of the two major sub-fields of geography.[1][2][3] Physical geography is that branch of natural science which deals with the study of processes and patterns in the natural environment like the atmosphere, hydrosphere, biosphere, and geosphere, as opposed to the cultural or built environment, the domain of human geography.

Within the body of physical geography, the Earth is often split into several spheres or environments, the main spheres being the atmosphere, biosphere, cryosphere, geosphere, hydrosphere, lithosphere and pedosphere. Research in physical geography is often interdisciplinary and uses the systems approach.

Physical Geography can be divided into several sub-fields, as follows:

Physical geography and Earth Science journals communicate and document the results of research carried out in universities and various other research institutions. Most journals cover a specific field and publish the research within that field, however unlike human geographers, physical geographers tend to publish in inter-disciplinary journals rather than predominantly geography journal; the research is normally expressed in the form of a scientific paper. Additionally, textbooks, books, and magazines on geography communicate research to laypeople, although these tend to focus on environmental issues or cultural dilemmas. Examples of journals that publish articles from physical geographers are:

Historical evolution of the discipline

From the birth of geography as a science during the Greek classical period and until the late nineteenth century with the birth of anthropogeography (human geography), geography was almost exclusively a natural science: the study of location and descriptive gazetteer of all places of the known world. Several works among the best known during this long period could be cited as an example, from Strabo (Geography), Eratosthenes (Geographika) or Dionisio Periegetes (Periegesis Oiceumene) in the Ancient Age to the Alexander von Humboldt (Kosmos) in the nineteenth century, in which geography is regarded as a physical and natural science, of course, through the work Summa de Geografía of Martín Fernández de Enciso from the early sixteenth century, which indicated for the first time the New World.

During the eighteenth and nineteenth centuries, a controversy exported from geology, between supporters of James Hutton (uniformitarianism thesis) and Georges Cuvier (catastrophism) strongly influenced the field of geography, because geography at this time was a natural science since Human Geography or Antropogeography had just developed as a discipline in the late nineteenth century.

Two historical events during the nineteenth century had a great effect in the further development of physical geography. The first was the European colonial expansion in Asia, Africa, Australia and even America in search of raw materials required by industries during the Industrial Revolution. This fostered the creation of geography departments in the universities of the colonial powers and the birth and development of national geographical societies, thus giving rise to the process identified by Horacio Capel as the institutionalization of geography.

One of the most prolific empires in this regard was Russia. In the mid-eighteenth century many geographers were sent by the Russian altamirazgo different opportunities to perform geographical surveys in the area of Arctic Siberia. Among these is who is considered the patriarch of Russian geography: Mikhail Lomonosov who in the mid-1750s began working in the Department of Geography, Academy of Sciences to conduct research in Siberia, their contributions are notable in this regard, shows the soil organic origin, develops a comprehensive law on the movement of the ice that still governs the basics, thereby founding a new branch of Geography: Glaciology. In 1755 his initiative was founded Moscow University where he promotes the study of geography and the training of geographers. In 1758 he was appointed director of the Department of Geography, Academy of Sciences, a post from which would develop a working methodology for geographical survey guided by the most important long expeditions and geographical studies in Russia. Thus followed the line of Lomonosov and the contributions of the Russian school became more frequent through his disciples, and in the nineteenth century we have great geographers as Vasily Dokuchaev who performed works of great importance as a "principle of comprehensive analysis of the territory" and "Russian Chernozem" latter being the most important where introduces the geographical concept of soil, as distinct from a simple geological strata, and thus founding a new geographic area of study: the Pedology. Climatology also receive a strong boost from the Russian school by Wladimir Köppen whose main contribution, climate classification, is still valid today. However, this great geographer also contributed to the Paleogeography through his work "The climates of the geological past" which is considered the father of Paleoclimatology. Russian geographers who made great contributions to the discipline in this period were: NM Sibirtsev, Pyotr Semyonov, K. D. Glinka, Neustrayev, among others.

The second important process is the theory of evolution by Darwin in mid-century (which decisively influenced the work of Ratzel, who had academic training as a zoologist and was a follower of Darwin's ideas) which meant an important impetus in the development of Biogeography.

Another major event in the late nineteenth and early twentieth centuries will give a major boost to development of geography and will take place in United States. It is the work of the famous geographer William Morris Davis who not only made important contributions to the establishment of discipline in his country, but revolutionized the field to develop geographical cycle theory which he proposed as a paradigm for Geography in general, although in actually served as a paradigm for Physical Geography. His theory explained that mountains and other landforms are shaped by the influence of a number of factors that are manifested in the geographical cycle. He explained that the cycle begins with the lifting of the relief by geological processes (faults, volcanism, tectonic upheaval, etc.). Geographical factors such as rivers and runoff begins to create the V-shaped valleys between the mountains (the stage called "youth"). During this first stage, the terrain is steeper and more irregular. Over time, the currents can carve wider valleys ("maturity") and then start to wind, towering hills only ("senescence"). Finally, everything comes to what is a plain flat plain at the lowest elevation possible (called "baseline") This plain was called by Davis' "peneplain" meaning "almost plain" Then the rejuvenation occurs and there is another mountain lift and the cycle continues. Although Davis's theory is not entirely accurate, it was absolutely revolutionary and unique in its time and helped to modernize and create Geography subfield of Geomorphology. Its implications prompted a myriad of research in various branches of Physical Geography. In the case of the Paleogeography this theory provided a model for understanding the evolution of the landscape. For Hydrology, Glaciology and Climatology as a boost investigated as studying geographic factors shape the landscape and affect the cycle. The bulk of the work of William Morris Davis led to the development of a new branch of Physical Geography: Geomorphology whose contents until then did not differ from the rest of Geography. Shortly after this branch would present a major development. Some of his disciples made significant contributions to various branches of physical geography such as Curtis Marbut and his invaluable legacy for Pedology, Mark Jefferson, Isaiah Bowman, among others. 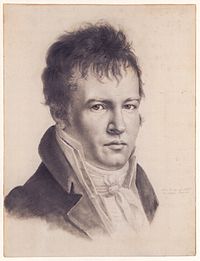 Alexander von Humboldt, considered to be the founding father of physical geography.