listen (help·info); c. 1415[1] – 12 October 1492) was an Italian painter of the Early Renaissance. As testified by Giorgio Vasari in his Lives of the Most Excellent Painters, Sculptors, and Architects, to contemporaries he was also known as a mathematician and geometer. Nowadays Piero della Francesca is chiefly appreciated for his art. His painting was characterized by its serene humanism, its use of geometric forms and perspective. His most famous work is the cycle of frescoes The History of the True Cross in the church of San Francesco in the Tuscan town of Arezzo.

Piero was born in the town of Borgo Santo Sepolcro,[1] modern-day Tuscany (where he also died), to Benedetto de' Franceschi, a tradesman, and Romana di Perino da Monterchi, part of the Florentine and Tuscan Franceschi noble family. 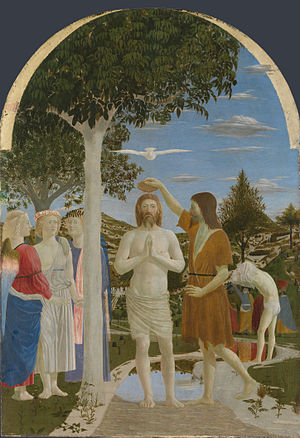 He was most probably apprenticed to the local painter Antonio di Giovanni d'Anghiari, because in documents about payments it is noted that he was working with Antonio in 1432 and May 1438.[2][3] Besides, he certainly took notice of the work of some of the Sienese artists active in San Sepolcro during his youth; e.g. Sassetta. In 1439 Piero received, together with Domenico Veneziano, payments for his work on frescoes for the church of Sant'Egidio in Florence, now lost. In Florence he must have met leading masters like Fra Angelico, Luca della Robbia, Donatello and Brunelleschi. The classicism of Masaccio's frescoes and his majestic figures in the Santa Maria del Carmine were for him an important source of inspiration. Dating of Piero's undocumented work is difficult because his style does not seem to have developed over the years.

In 1442 he was listed as eligible for the City Council of San Sepolcro. Three years later, he received the commission for the Madonna della Misericordia altarpiece for the church of the Misericordia in Sansepolcro, completed in the early 1460s. In 1449 he executed several frescoes in the Castello Estense and the church of Sant'Andrea of Ferrara, also lost. His influence was particularly strong in the later Ferrarese allegorical works of Cosimo Tura.

Two years later he was in Rimini, working for the condottiero Sigismondo Pandolfo Malatesta. In this sojourn he executed in 1451 the famous fresco of St. Sigismund and Sigismondo Pandolfo Malatesta in the Tempio Malatestiano, as well as Sigismondo's portrait. In Rimini Piero may have met the famous Renaissance mathematician and architect Leon Battista Alberti, who had redesigned the Tempio Malatestiano; although it is known that Alberti directed the execution of his designs for the church by correspondence with his building supervisor. Thereafter Piero was active in Ancona, Pesaro and Bologna. In 1454 he signed a contract for the polyptych in the church of Sant'Agostino in Sansepolcro. The central panel of this polyptic is lost and the four panels of the wings, with representations of Saints, are scattered around the world. A few years later, summoned by Pope Nicholas V, he moved to Rome: here he executed frescoes in the Basilica di Santa Maria Maggiore, of which only fragments remain. Two years later he was again in the Papal capital, for frescoes in Vatican Palace which have also been destroyed.

The Baptism of Christ, in The National Gallery in London, was executed around 1460 for the high altar of the church of the Priory of S. Giovanni Battista at Sansepolcro. Other notable works of Piero della Francesca's maturity are the frescoes of the Resurrection of Christ in Sansepolcro and the Madonna del parto in Monterchi, near Sansepolcro.

Frescoes in San Francesco at Arezzo 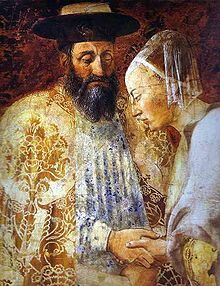 Legend of the True Cross – the Queen of Sheba meeting with King Solomon.

In 1452, Piero della Francesca was called to Arezzo to replace Bicci di Lorenzo in painting the frescoes of the basilica of San Francesco. The work was finished before 1466, probably between 1452 and 1456. The cycle of frescoes, depicting the Legend of the True Cross, is generally considered among his masterworks and those of Renaissance painting in general. The story in these frescoes derives from legendary medieval sources as to how timber relics of the True Cross came to be found. These stories were collected in the Golden Legend of Jacopo da Varazze (Jacopo da Varagine) of the mid-13th century. [4]

Between 1469 and 1486 Piero della Francesca worked repeatedly in the service of Count Federico III da Montefeltro (Duke in 1474). According to Giorgio Vasari, Piero would have worked for Federico's father Guidantonio, who died in February 1443. However, this is unlikely because this statement is not confirmed by documents or paintings. Vasari may have confused Guidantonio with Federico. The Flagellation is generally considered Piero's oldest work in Urbino (dating c. 1455–1470). It is one of the most famous and controversial pictures of the early Renaissance. As discussed in its own entry, it is marked by an air of geometric sobriety, in addition to presenting a perplexing enigma as to the nature of the three men standing at the foreground.

Another famous work painted in Urbino is the Double Portrait of Federico and his wife Battista Sforza, in the Uffizi. The portraits in profile take their inspiration from large bronze medals and stucco roundels with the official portraits of Fedederico and his wife. Other paintings made in Urbino are the monumental Montefeltro Altarpiece in the Brera Gallery in Milan and probably also the Madonna of Senigallia.

In his later years, painters such as Perugino and Luca Signorelli frequently visited his workshop. It is documented that Piero rented a house in Rimini in 1482. Although he may have given up painting in his later years, Vasari's remarks that he went blind at old age and at the age of sixty, have to be doubted, since in 1485 he completed his treatise on regular solids, dedicated to Guidobaldo da Montefeltro, son and heir of Duke Federico, in his own fine handwriting. Piero made his will in 1487 and he died five years later, on 12 October 1492, in his own house in San Sepolcro. He left his possessions to his family and the church.

Recently, the Frick Collection in New York until 19 May 2013, collected seven of the eight extant paintings of Piero known to exist in the United States for exhibition. Of the seven pieces in the exhibit, critic Jerry Saltz writing in New York magazine singled out Piero's Virgin and Child Enthroned With Four Angels for its exemplary qualities. Saltz states that, "The Virgin and child are elevated two steps. They are in a world itself apart from this world apart. Mary isn't looking at her child and looks instead at the rose he reaches for. You begin to glean the revelation she is having. The flower represents love, devotion, and beauty. It also symbolizes blood and the crown of thorns Christ will wear. This child who will suffer a horrendous death reaches for his acceptance of fate. Mary does not pull the flower back. You sense an inner agony, noticing her deep-blue robe open to reveal scarlet beneath, symbol of outward passion and pain to come. In the dead-center vertical line of the painting is Christ's right palm that will be nailed to the cross." Saltz accepted this oil painting as the most exceptional work of Piero on display in the exhibit.[5]

Work in mathematics and geometry 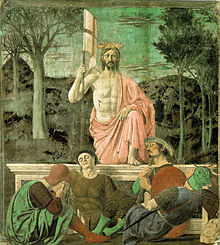 Piero's deep interest in the theoretical study of perspective and his contemplative approach to his paintings are apparent in all his work.[6] Three treatises written by Piero are known to modern mathematicians: Abacus Treatise (Trattato d'Abaco), Short Book on the Five Regular Solids (Libellus de Quinque Corporibus Regularibus) and On Perspective for Painting (De Prospectiva Pingendi). The subjects covered in these writings include arithmetic, algebra, geometry and innovative work in both solid geometry and perspective. Much of Piero’s work was later absorbed into the writing of others, notably Luca Pacioli. Piero’s work on solid geometry appears in Pacioli’s "De divina proportione", a work illustrated by Leonardo da Vinci. Biographers of his patron, Federico da Montefeltro of Urbino, record that he was encouraged to pursue the interest in perspective which was shared by the Duke.

In the late 1450s, Piero copied and illustrated the following works of Archimedes:[7] On the Sphere and the Cylinder; On the Measurement of the Circle; On Conoids and Spheroids; On Spirals; On the Equilibrium of Planes; On the Quadrature of the Parabola; The Sand Reckoner. The manuscript consists of 82 folio leaves. It's held in the collection of the Biblioteca Riccardiana[8] and it is a copy of the translation of the Archimedean corpus made by the Italian humanist Iacopo da San Cassiano (also known as Iacobus Cremonensis).[9]

Bohuslav Martinů wrote a three movement work for orchestra entitled Les Fresques de Piero della Francesca. Dedicated to Rafael Kubelik, it was premiered by Kubelik and the Vienna Philharmonic at the 1956 Salzburg Festival. Piero's geometrical perfection and the almost magic atmosphere of the light in his painting inspired modern painters like Giorgio de Chirico, Massimo Campigli, Felice Casorati and Balthus. 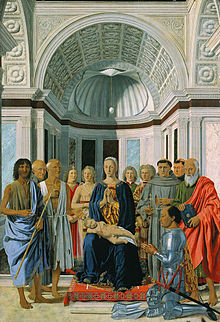