Pierre and Marie Curie University (French: Université Pierre-et-Marie-Curie; abbreviated UPMC), also known as University of Paris VI,[3] is a public research university and was established in 1971 following the division of the University of Paris (Sorbonne), and is a principal heir to Faculty of Sciences of the Sorbonne (French: Faculté des sciences de Paris), although it can trace its roots back to 1109 and the Abbey of St Victor.[4][5]

The university is located on the Jussieu Campus in the Latin Quarter of the 5th arrondissement of Paris, France. The French cultural revolution of 1968, commonly known as "the French May", resulted in the division of the world's second oldest academic institution, the University of Paris, into thirteen autonomous universities.

UPMC is the largest scientific and medical complex in France, active in many fields of research with scope and achievements at the highest level, as demonstrated by the many awards regularly won by UPMC researchers, and the many international partnerships it maintains across all five continents.[6] Several university rankings have regularly put UPMC at the 1st place in France, and it has been ranked as one of the top universities in the world. The ARWU (2014) has ranked UPMC as the 1st in France, 6th in Europe and 35th in the world and also 4th in field of mathematics, 25th in field of physics, 14th in field of natural sciences and 32nd in field of engineering, technology and computer science.[7]

It has more than 125 laboratories, most of them in association with the Centre national de la recherche scientifique (CNRS). Some of its most notable institutes and laboratories include the Institut Henri Poincaré, Institut d'astrophysique de Paris, Laboratoire d'informatique de Paris 6 (LIP6), Institut de mathématiques de Jussieu (shared with University Paris-Diderot) and the Laboratoire Kastler-Brossel (shared with École Normale Supérieure).

The University's Faculty of Medicine Pierre and Marie Curie is located in the teaching hospitals Pitié-Salpêtrière and Saint-Antoine (the latter itself being the successor to Saint-Antoine-des-Champs Abbey).

UPMC delivers a diploma in physics in English, since September 2013 for Université Paris-Sorbonne Abou Dhabi.[8] 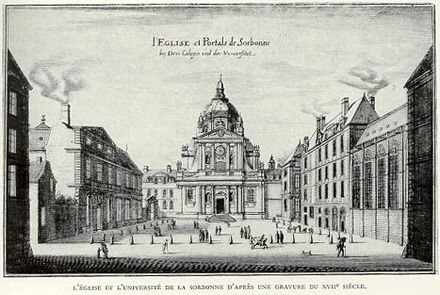 University of Paris (Sorbonne) at the 17th Century 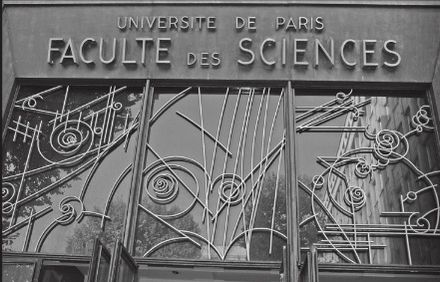 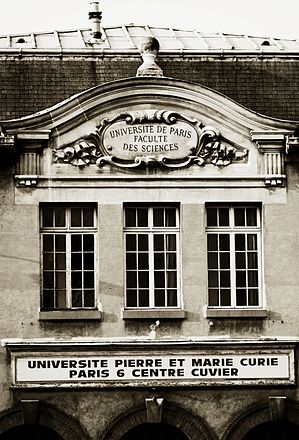 The historic University of Paris (French: Université de Paris) first appeared in the second half of the 12th century, but was reorganized in 1970 as 13 autonomous universities after the student protests of the French May.

Following months of conflict between students and authorities at the University of Paris at Nanterre, the administration shut down that university on 2 May 1968.

Students of the Sorbonne protested the closure and the threatened expulsion of several students at Nanterre on 3 May 1968. More than 20,000 students, teachers and supporters marched towards the Sorbonne, still sealed off by the police, who charged, wielding their batons, as soon as the marchers approached. While the crowd dispersed, some began to create barricades out of whatever was at hand, while others threw paving stones, forcing the police to retreat for a time. The police then responded with tear gas and charged the crowd again.

Hundreds more students were arrested. Negotiations broke down and students returned to their campuses after a false report that the government had agreed to reopen them, only to discover the police still occupying the schools. The students now had a near revolutionary fervor. Another protest was organized on the Rive Gauche by students on 10 May. When the riot police again blocked them from crossing the river, the crowd again threw up barricades, which the police then attacked at 2:15 in the morning after negotiations once again foundered.

The confrontation, which produced hundreds of arrests and injuries, lasted until dawn of the following day. Well over a million people marched through Paris on Monday, 13 May; the police stayed largely out of sight. Prime Minister Georges Pompidou personally announced the release of the prisoners and the reopening of the Sorbonne. However, the surge of strikes did not recede. Instead, the protesters got even more active.

When the Sorbonne reopened, students occupied it and declared it an autonomous "people's university." Approximately 401 popular action committees were set up in Paris, including the Occupation Committee of the Sorbonne, and elsewhere in the weeks that followed to take up grievances against the government and French society. With the fall of the French Fourth Republic in 1958, and after the tumultuous events of May 1968, the French Fifth Republic proposed various drastic reforms of the French university system.

In 1971, the five ancient faculties of the former University of Paris (Paris 6 as the Faculty of Sciences) were split and then re-formed into thirteen interdisciplinary universities by the Faure Law. The campus was built in the 1950s and 1960s, on a site previously occupied by wine storehouses.

The Dean, Marc Zamanski, saw the Jussieu campus standing as a tangible symbol of scientific thought in the heart of Paris, with the Faculty of Science, set in the Latin Quarter, as part of an intellectual and spiritual continuum linked to the university history of Paris. In 1968, the Paris Faculty of Science was divided into a number of different universities.

In 1974, the University of Paris 6 chose prestigious champions when it adopted the name Université Pierre et Marie Curie, after Pierre and Marie Curie, and ever since has endeavored to perpetuate the scientific legacy of these forebears.

UPMC is now the largest scientific and medical complex in France, active in all fields of research (see "University Rankings").[9]

Merging Universities of Paris 6 and Paris 4

Logo of the Sorbonne University (alliance) 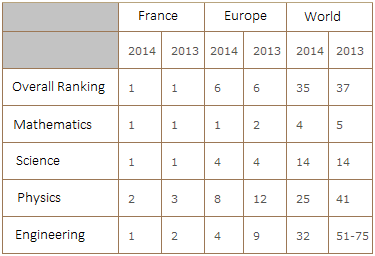 This list includes people who were involved with Faculty of Science from the erstwhile University of Paris, of which UPMC is the main heir:[24]

Research cooperation agreements are managed by the Research and Technology Transfer Department. This department is the primary contact for the government ministry, research organizations, private companies, foundations, associations, and laboratories.

UPMC is a leading university in mathematics: pure mathematics, digital computation, probability, statistics, and combinatorics. Information Technology research is focused on: architecture, networks, systems, artificial intelligence, programming and scientific computation. In the field of electronics, work is concentrated on the articulation of architecture, electronics, artificial intelligence and signal processing.

Numerous initiatives in scientific and medical imaging, artificial intelligence and robotics are in place. With its three teaching hospitals, UPMC supports many interdisciplinary teams working on medical research challenges, such as imaging, micro-surgery, assistance for disabilities and artificial organs.

UPMC research in physics covers most fields in the discipline. Subject areas have been organized around four main areas: 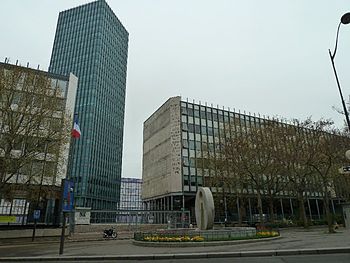 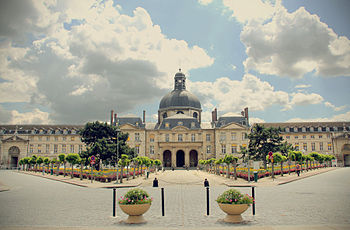 Paris 6 the Faculty of Medicine

Chemistry groups have based their research on the principle of interdependence between synthesis, analysis, studies of structures and properties of new chemical compounds:

Projects involving a number of disciplines are mainly joint studies of new materials. Applications concern fields as diverse as concretes, catalysis and new materials for rapid information technology, for analytical sciences and environmental tests, as well as new forms of energy storage and conversion.

Living earth and the environment

Genetics, biochemistry and molecular biology, cell biology, the biology of development and physiology, including at UPMC:

1) development of Group Research Institutes ["IFR – Instituts Fédératifs de Recherche", another means to centralize French research institutes]. UPMC has several, including the IFR at Saint-Antoine Teaching Hospital specialized in the physiopathology of cancers, inflammatory processes, and the hormonal mechanisms involved, and the Pitié-Salpêtrière Teaching Hospital which has two IFRs, one on neuroscience and the other on the heart, muscle and vessels. A third area of research covers topics in immunity and infection. The IFR on Cell Communication & Regulation on the "Cordeliers" campus specializes in the field of cell biology, nutrition and immunology. Finally, an IFR for integrated biology on the Jussieu campus focuses on the integrated study of cellular and molecular mechanisms involved in development, reproduction, and the major physiological functions of animal and plant organisms, and their evolution.

2) development of a network of small laboratories specialized in post-genomics and proteomics, phenotyping and imaging.

The UPMC Doctoral Schools are built around their own research teams, which are mostly associated with the CNRS, INSERM, INRA, INRIA, or IRD, as well as with other universities and partner organisations. Each school organises doctoral studies based on the four main research themes of the university.

Academicians affiliated with UPMC include: