Pierre Lafitte (1770–1821) was a privateer in the Gulf of Mexico and smuggler in the early 19th century. He also ran a blacksmith shop in New Orleans, his legitimate business. Pierre was the historically less-well-known older brother of Jean Lafitte. While not as much of a sailor as his brother, he was the public face of the Lafitte operation, and was known for his wit and charm, in addition to his handling of the sale of smuggled goods.

Pierre Lafitte also spied for Spain and commanded artillery units. He died in 1821 near Dzilam de Bravo in the Yucatán Peninsula.

Details of Pierre Lafitte's early life are scarce and often disputed. His brother Jean gave contradictory information about his birthplace, including the two French cities of St. Malo and Brest. However, as Jean Lafitte's biographer Jack C. Ramsay states, "this was a convenient time to be a native of France, a claim that provided protection from the enforcement of American law."[1] Further contemporary accounts claim that Jean Lafitte was born in Orduna, Spain, or even Westchester, New York.[1] Ramsay speculates that Lafitte was actually born in the French Caribbean colony Saint-Domingue (now Haiti).[1]

It was not uncommon in the late 18th century for the adult children of the French landowners in Saint-Domingue to resettle in the Mississippi River Delta, also owned by France. Families with the surname Lafitte are mentioned in Louisiana documents dating as early as 1765.[2] According to Ramsay, Lafitte, his younger brother Jean, and their widowed mother sailed from Saint-Domingue to New Orleans, Louisiana (New Spain) in the 1780s. Approximately 1784, his mother married Pedro Aubry, a New Orleans merchant; Jean stayed with his mother while Pierre was raised by extended family elsewhere in Louisiana.[3]

Biographer William C. Davis reports a different childhood. According to his book, Lafitte was born in or near Pauillac, France. He was the son of Pierre Lafitte and Marie LaGrange, who married in 1769. LaGrange died the following year, likely while giving birth. The elder Pierre Lafitte remarried in 1775 to Marguerite Desteil; they had six children, including Jean Lafitte. The boys were likely given a basic education,[4] and Pierre Lafitte later joined his father's trading enterprise.[5]

The father died in 1796, and Davis speculates that the younger Pierre Lafitte journeyed to Saint-Domingue (soon to be Haiti).[6] In May 1802 Lafitte requested a passport so that he could go "to Louisiana to join one of his brothers".[7] As the Haitian Revolution became more violent, French citizens began leaving the islands. Lafitte, probably accompanied by an infant son, left the island aboard a refuge ship in early 1803.[8]

Lafitte's ship landed in New Orleans, originally part of colonial French Louisiana, although it had been a Spanish possession for nearly forty years. Records indicate that on March 21, 1803, Pierre Lafitte partnered with Joseph Maria Bourguignon to purchase a city lot, home, and outbuildings near Royal Street.[9] The men were unable to pay their mortgage and returned the property three months later.[10] In December 1803, Louisiana became a territory of the United States.[11] The following year, Lafitte moved to Baton Rouge, located in Spanish-controlled West Florida.[12]

Along with his 'crew of a thousand men' (the number he commanded was actually quite small, but, due to the loose confederation which he and his brother ran, the number of men engaged in their affairs was substantial), Lafitte also receives credit for helping defend Louisiana from the British in the War of 1812, and Pierre is mentioned in several accounts of the Battle of New Orleans. His piracy was pardoned by President Madison on February 6, 1815, for aiding Andrew Jackson in the battle.[13]

The United States made the Louisiana Purchase in 1803. In January 1808, the government began to enforce the Embargo Act of 1807, which barred American ships from docking at any foreign port. This was problematic for New Orleans merchants, who had relied heavily on trade with Caribbean colonies of other nations.[14] Pierre and his younger brother Jean began to look for another port from which they could smuggle goods to local merchants.

They established themselves on the small and sparsely populated island of Barataria, in Barataria Bay. The bay was located beyond a narrow passage between the barrier islands of Grande Terre and Grande Isle.[15] Barataria was far from the U.S. naval base, and ships could easily smuggle in goods without being noticed by customs officials. Workers would reload goods into smaller batches onto pirogues or barges for transport through the bayous to New Orleans.[16]

Jean claimed to command more than 3,000 men and provided them as troops for the Battle of New Orleans in 1815, greatly assisting Andrew Jackson in repulsing the British attack. The actual number he commanded was more likely a few dozen, although since they specialized in artillery their effect was substantial. Lafitte reportedly conducted his operations in the historic New Orleans French Quarter. General Jackson was informed of both Lafittes' gallant exploits at the Battle of New Orleans by Colonel Ellis P. Bean, who then recruited the Lafittes to support the Mexican Republican movement.

Of the two brothers, Jean was the most familiar with the naval aspects of their enterprise, while Pierre was more often involved with the commercial aspects. Pierre lived in New Orleans or at least maintained his household there (with his mulatto lover who bore him a very large family). Jean spent the majority of his time in Barataria managing the daily hands-on business of outfitting privateers and arranging the smuggling of stolen goods. The most prized "good" was invariably slaves, especially after the outlawing of the international slave trade in the United States. 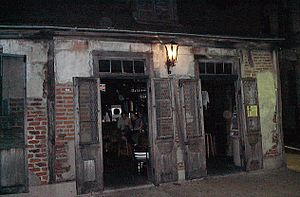 The building in New Orleans which housed Pierre Lafitte's blacksmith shop, now converted into a bar

In 1810, a Spanish slave ship en route to Pensacola was captured by privateers and its cargo sold in Louisiana. The ship owner launched an investigation and discovered the names of the men who had purchased the slaves. The sheriff of Ascension Parish appointed Lafitte a deputy marshal and sent him to recover the slaves; Lafitte served the arrest warrant and helped round up the slaves. A provision in the Louisiana laws abolishing the slave trade called for illegally imported slaves to be confiscated and sold at auction, with half the profits going to the men who turned in the illegally gotten slaves. For his work in this case, Lafitte received half the purchase price for each illegally purchased slave he identified.[17] Davis speculated that Lafitte participated in the raid to try to close down the operations of slave traders who were not operating through Barataria Bay.[18]

After Jean was run out of New Orleans around 1817, Pierre remained in New Orleans, but frequently visited the island of Galveston, Texas, to visit his brother.

While the Lafitte brothers were engaged in running the Galveston operation, one client they worked with considerably in the slave smuggling trade was Jim Bowie. The Lafittes were selling slaves at a dollar a pound, and Bowie would buy them at the Lafittes' rate, then get around the American laws against slave trading by reporting his purchased slaves as having been found in the possession of smugglers. The law at the time allowed Bowie to collect a fee on the "recovered" slaves, and he would then re-buy the slaves (essentially a "slave laundering" act) and then resell them to prospective buyers.

The Lafittes (Pierre, in particular) spied for Spain through agents in Cuba and in Louisiana. While often providing solid material, the Lafittes in fact played both sides, American and Spanish, and always with an eye to securing their own interests. No doubt the charm of Pierre and his reputation as a man in the know figured heavily in the weight he was given by his immediate handlers, although he was never trusted by the higher-up of the Spanish interests. While running the island of Galveston for personal benefit, Pierre Lafitte tried to induce Spain to assault the island. This would have enhanced his standing with Spain while causing minimal real losses to the Lafitte operations.