Pillow is a borough in Dauphin County, Pennsylvania, United States. The population was 298 at the 2010 census.[1] It is part of the Harrisburg–Carlisle Metropolitan Statistical Area.

Pillow was founded in 1818 by John Snyder, a land developer from Mercer County, as "Snydertown" (Schneiderstettle). The borough was incorporated as "Uniontown" on April 20, 1864. When the town got its first post office in 1847, a post office under the name of "Uniontown" already existed. A postal official substituted the name "Pillow" after General Gideon Pillow, who was popular at the time for his victories in the Mexican–American War.[2] Over the next hundred years, the new name slowly took hold, and on November 2, 1965, the residents voted to change the official name of the town to "Pillow".

During the late 19th and early 20th centuries, Pillow had numerous industries, including a cotton mill, a burial vault manufacturer, a brickworks, and a potato chip factory. Today, the only major industry is the Codi case factory.

Pillow is the northernmost town in Dauphin County, located at Lua error in Module:Coordinates at line 668: callParserFunction: function "#coordinates" was not found. (40.640430, -76.803464).[3] It is bounded on the west, north, and east by Mahantango Creek, a west-flowing tributary of the Susquehanna River, and on the south by Mahantango Mountain.

Pennsylvania Route 225 passes through the center of the borough, leading northeast 23 miles (37 km) to Shamokin and south 7 miles (11 km) to Elizabethville.

There were 131 households, out of which 26.0% had children under the age of 18 living with them, 64.1% were married couples living together, 2.3% had a female householder with no husband present, and 29.0% were non-families. 25.2% of all households were made up of individuals, and 10.7% had someone living alone who was 65 years of age or older. The average household size was 2.32 and the average family size was 2.75. 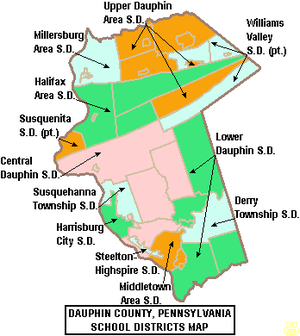 Capital Area Intermediate Unit #15 provides a wide variety of services to children living in its region which includes Pillow. Early screening, special educations services, speech and hearing therapy and many other services like driver education are available. Services for children during the preschool years are provided without cost to their families when the child is determined to meet eligibility requirements. CAIU15 also operates Capital Area Online Learning Association which is an online learning program operated in association with the local public schools.[10]

Pillow residents have access to Harrisburg Area Community College. People residing in Pillow fund HACC through an annual payment made by Upper Dauphin School District.[11] Twenty two local public school districts are required to contribute annually to HACC regardless of whether any residents are attending the college. Full-time students from these districts, who attend HACC, pay $1,674 for 12 credit hours.