A pink Chanel suit was worn by Jacqueline Bouvier Kennedy on November 22, 1963, when her husband, President John F. Kennedy was assassinated in Dallas, Texas.[1][2] Made of wool bouclé, the double-breasted, strawberry pink and navy trim collared suit was accompanied by a trademark matching pink pillbox hat.[3] After President Kennedy was assassinated, Jacqueline Kennedy insisted on wearing the suit, stained with his blood, during the swearing-in of Lyndon B. Johnson and for the flight back to Washington, D.C. with the President’s body.

Jacqueline Kennedy was a fashion icon, and this outfit is arguably the most referenced and revisited of all of her items of clothing and her trademark.[4][5]

There was long a question among fashion historians and experts whether the suit was a genuine Chanel or a quality copy purchased from New York's semiannual Karl Lagerfeld or Chez Ninon collections, resolved in favor of a "Chanel" by her biographer, Justine Picardie.[6]

The suit as fashion

In the late 1950s and early 1960s, the Chanel suit was one of the strongest symbols of bourgeois female chic that could be found anywhere in the Western world, evoking a powerful image of a sophisticated, intelligent and independent modern woman.[7] During this era it became the "wardrobe staple of the upwardly mobile American female which could fit almost every daytime occasion that required a woman to dress stylishly."[7] Although women wearing pink in the 21st century is common, pink was new to fashion in the 1950s and was a color loved and even popularized to an extent in American fashion by Mamie Eisenhower, who endorsed a color which, according to cultural historian Karal Ann Marling, was called "Mamie Pink."[7] Given that the Chanel suit was a strong statement of an independent woman, the color pink has an element of traditional femininity, perhaps evading the foreign and feminist attributes associated with the Chanel suit in a conservative American society.[7]

Before John F. Kennedy departed for Dallas he asked his wife what she planned to wear. In an interview with William Manchester after the event, Kennedy said that her husband had told her:

"There are going to be all these rich, Republican women at that lunch ... wearing mink coats and diamond bracelets. And you've got to look as marvelous as any of them. Be simple – show these Texans what good taste really is." So she tramped in and out of his room, holding dresses in front of her. The outfits finally chosen – weather permitting – were all veterans of her wardrobe: beige and white dresses, blue and yellow suits, and, for Dallas, a pink suit with a navy blue collar and a matching pink pillbox hat.[6]

The pink suit, which, it was said, was one of her husband's "particular favorites",[6] had first been shown by Coco Chanel in her 1961 autumn/winter collection.[6] Photographs exist of Mrs. Kennedy wearing the suit – or one very similar to it – in Washington D.C. in November 1961; to church on November 12, 1961; in London on March 26, 1962; in Washington D.C. in September 1962; in Lafayette Square on September 26, 1962; at the visit by the Prime Minister of Algeria on October 15, 1962; and the visit of the Maharaja of Jaipur on October 23, 1962.[8] After the last of these occasions, she was apparently not photographed wearing it until the day of the assassination, when she was pictured in it at Fort Worth and Dallas leading up to the assassination, having been revealed wearing it after stepping out of Air Force One at Love Field.

The suit was double-breasted, with three gold buttons and two pockets with a navy trim on each side. The thick collar, and the trim on the sleeves and the pockets, were navy. Accompanying the suit was a trademark pillbox hat in matching pink. Kennedy completed the look with a navy blue handbag matching the collar, with a gold trim. Most of the American public viewing pictures of the presidential couple on television and in newspapers between 1961 and 1963 would not have known the color of the suit, given that at the time of the assassination TV news was still in black and white and newspapers did not print color photographs.[7] The color of the suit became widely known only after the publication of the Warren Commission report in a color magazine in October 1964.[7]

There was long a question among fashion historians and experts whether the suit was a genuine Chanel or a quality copy purchased from New York's Chez Ninon, a popular dress shop that imported European label designs.[8][9] A number of sources claimed it was more than likely a copy of a Chanel pink bouclé wool suit trimmed with a navy blue collar, some asserting it was made by Chez Ninon in 1961.[8] Further complicating the matter was the indisputable fact that the First Lady's "official" designer was Oleg Cassini who provided much of her public as well as private wardrobe.[10] In her 2010 authorized biography of Coco Chanel, Justine Picardie resolved the matter, stating the fabric, buttons and trim for the jacket came from Chanel in Paris, from which the suit was made and fitted for Kennedy at Chez Ninon, using Chanel's approved "line for line" system.[6] Picardie insists this system had nothing to do with forgery or trademark infringement, since Chanel supplied the materials to Chez Ninon. The purpose of buying the suit from Chez Ninon was not to save money – the costs were the same – but to appear patriotic to the American electorate by buying her garments from the United States rather than France.[6] The suit in 1963 was estimated to cost $800 to $1,000 ($6,196 to $7,745 in 2016 dollars) .[8] 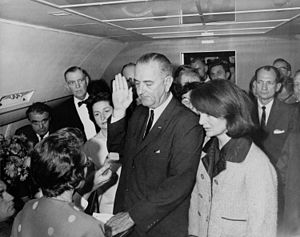 Jacqueline Kennedy was seated in the back seat of the open-top presidential limousine to the left side of President John F. Kennedy as it traveled through Dallas. Immediately after he was shot in the head, the suit became spattered with his blood.

"I cast one last look over my shoulder and saw in the President's car a bundle of pink, just like a drift of blossoms, lying in the back seat. It was Mrs. Kennedy lying over the President's body."[6]

At the hospital, Mrs. Kennedy kept her blood-stained suit on but was not wearing the hat. William Manchester wrote in Death of a President:

"The Lincoln flew down the boulevard's central lane; her pillbox hat, caught in an eddy of whipping wind, slid down over her forehead, and with a violent movement she yanked it off and flung it down. The hatpin tore out a hank of her own hair. She didn't even feel the pain."

The whereabouts of the hat today are unknown, and the last person known to have had it – her personal secretary, Mary Gallagher – will not discuss it.[11] Several people asked Mrs. Kennedy whether she would like to change her suit but she refused. When Lady Bird offered to send someone to help her, she responded:

Despite the advice of John F. Kennedy's physician, Admiral George Burkley, who "gently tried to persuade her to change out of her gore-soaked pink Chanel suit,"[14] she wore the suit alongside Vice President Johnson as he was sworn in on Air Force One as the 36th President of the United States.[12] In the photograph of the ceremony (right) the blood stains cannot be seen as they were on the right-hand side of the suit. Lady Bird recalls that during the swearing-in:

"Her hair [was] falling in her face but [she was] very composed ... I looked at her. Mrs. Kennedy's dress was stained with blood. One leg was almost entirely covered with it and her right glove was caked, it was caked with blood – her husband's blood. Somehow that was one of the most poignant sights – that immaculate woman, exquisitely dressed, and caked in blood."[6]

Kennedy had no regrets about refusing to take the blood-stained suit off; her only regret was that she had washed the blood off her face before Johnson was sworn in.[12]

When Kennedy finally removed her suit the following morning, her maid folded it and placed it in a box. Some days after the assassination this box was dispatched to Jacqueline Kennedy's mother, who wrote "November 22nd 1963" on the top of the box and stored it in her attic.[6] Eventually the box was given to the National Archives in Maryland, together with a note, not signed, on Jackie Kennedy's mother's letterhead stationery, that read: "Jackie's suit and bag worn Nov. 22, 1963."[11] The suit, which was never cleaned,[6] is kept out of public view in "an acid-free container in a windowless room ... the precise location is kept secret. The temperature hovers between 65 and 68 °F (18 and 20 °C) degrees; the humidity is 40 percent; the air is changed six times an hour."[11]

Kennedy continued to buy Chanel clothes for a time after the assassination.[6] In her remaining years Coco Chanel was never heard to pass comment on the blood-stained suit, although she did remark upon Jackie Kennedy's fondness for wearing miniskirts that "she wears her daughter's clothes."[6]

Kennedy's Chanel suit has been variously described as "a famous pink suit which will forever be embedded in America's historical conscience",[citation needed] "one of those indelible images Americans had stored: Jackie in the blood-stained pink Chanel suit",[8][15][16] "the most legendary garment in American history",[7] and "emblematic of the ending of innocence".[6]

The garment is now stored out of public view in the National Archives.[7][8] It will not be seen by the public until at least 2103, according to a deed of Caroline Kennedy, Kennedy's sole surviving heir.[11] At that time, when the 100-year deed expires, the Kennedy family descendants will renegotiate the matter.[11]

The suit has been well referenced and replicated in American theater and film.[17][18] In 2011, a copy of the suit appeared in the mini-series The Kennedys. However, the Chanel copy was recreated by Giorgio Armani.[4] In the Simpsons episode 'Scenes from the Class Struggle in Springfield', Marge Simpson's Chanel outfit was modelled upon Kennedy's suit.[19]