Pirate's Lair on Tom Sawyer Island is an artificial island surrounded by the Rivers of America at Disneyland. It contains caves with references to Disney's Pirates of the Caribbean film series and Mark Twain characters from the novel The Adventures of Tom Sawyer, and provides interactive, climbing, and scenic opportunities. 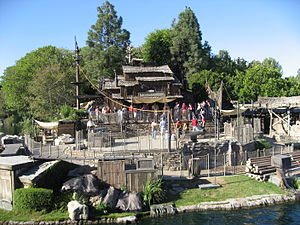 The area opened in 1956, one year after the opening of Disneyland Park.

Prior to the debut of Fantasmic! in 1992, when the south end of the Island was re-built to facilitate the nighttime show, Tom Sawyer Island saw very little change. The Island received major upgrades, new show elements, and a complete re-theming in 2007 when it re-opened as Pirate's Lair on Tom Sawyer Island. The re-theming eradicated much of the previous Tom Sawyer theme in favor of characters and elements from and inspired by the Pirates of the Caribbean film series.

Pirate's Lair on Tom Sawyer Island's opening coincided with the theatrical release of Pirates of the Caribbean: At World's End.[1]

On January 11, 2016, Pirate's Lair on Tom Sawyer Island, along with the other attractions and shows along the Rivers of America, closed temporarily for the construction of a Star Wars-themed land. These attractions will reopen at a later date.[2]

Guests visit the island, surrounded by the Rivers of America, by traveling on a motorized raft which is piloted by a Disneyland cast member.

While aboard the Sailing Ship Columbia or Mark Twain Riverboat, Disneyland guests travel clockwise around the island. Looking to starboard, they can see the many areas and adventure opportunities of the island. To port, they see Disneyland itself and from time to time will see a Disneyland Railroad train passing by. At the northern end of the island, inaccessible to guests, is the Burning Settler's Cabin, a cabin that used to actually burn by spewing fire from its roof. Despite guest complaints, the park no longer ignites the roof of the cabin with propane each time a watercraft passes by. The Walt Disney World version lasted until 2006, where the pipes (the originals from 1971) were damaged by age and being turned off while the Riverboat was under "rehab".

Over the years, there have been theme changes to the cabin itself: originally, it was said to have been set afire by a hostile native tribe. This storyline was eventually changed due to complaints from Native American guests, so it was said to have been the home of a moonshiner who had fallen into a drunken stupor when he should have been minding his still; later, after the live flames were eliminated, the fire was described (at least in the Mark Twain steamboat narration) as the result of unspecified carelessness, and as having left not only the cabin's owner homeless, but also some of the local wildlife. In 2007, the outward appearance of the house was cleaned up and all fire damage was removed, making it just another homestead along the waters. Currently, narration (and dialogue from the cabin itself) indicates that it is the home of Mike Fink, keelboater and self-proclaimed "King of the River."

The most prominent structure on the island, viewable from Frontierland, Adventureland and New Orleans Square, is Lafitte's Tavern, which was formerly Harper's Mill.

Many a pirate's boot has trod upon this slip of land. And many's the adventure begun here. Keep your wits about you in your travels on the island, for there's treasure and danger here in equal measure. X Marks the spot you seek. Good luck, matey!

The Landing on the island consists of a small dock in which the Rafts to Tom Sawyer Island travel to from the mainland. Guests exit the raft here, and then guests waiting in the dock's small switchback queue enter the raft to travel back to the mainland. 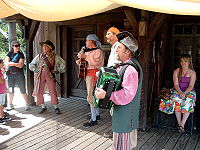 Here be a safe harbor from all manner of storms. A wild and boisterous place, no doubt, but a place to learn the ways of the sea and the arts of the master sailors.

Lafitte's Tavern is the former Harper's Mill which has been part of Tom Sawyer Island since its inception. The outside walls and porch of Lafitte's Tavern features various swords and the salty pirates visiting this place are asked to stow their weapons outside. Despite the Explorer's Map's lively description of the place, Guests cannot actually enter the Tavern.

There was small pirate stunt show that took place on the stage area in front of the Tavern, and between shows The Bilge Rats, a band of pirate musicians, entertained guests with lively sea chanteys.

The Tavern actually houses a lot of show equipment and elements for the nighttime show, Fantasmic!. And beneath the ground that the tavern overlooks is a massive pit that houses the show animatronic Maleficent the Dragon, and the large Pinocchio characters seen in the show.

The tools of me trade are forged in iron with fire and smoke. Give me a length of steel in one hand and a fair wind to guide me. Aye, there's nothing better - and nothing more a pirate needs.

W. Turner Blacksmith features props and show elements reminiscent of the blacksmith shop from Pirates of the Caribbean: The Curse of the Black Pearl in which the character of Will Turner is introduced.

Tread carefully these dark and winding caves. Though none will argue there be treasure here in great abundance, ghostly apparitions do haunt these corridors of stone. And every jewel is guarded well by forces none may know.

Formerly Injun Joe's Cave (featuring a bridge over a bottomless pit along with wind and moan sounds), Dead Man's Grotto infuses more of the Pirates of the Caribbean film mythology into Tom Sawyer Island. The cave features several prominent interactive elements that feature state-of-the-art lighting and sound technology. The first thing guests will note is that Captain Jack Sparrow has left a note of caution for explorers above the entry. The first major interactive feature guests will encounter is the Chest of Davy Jones from the Pirates of the Caribbean films. Upon touching the chest, lighting will change, Davy Jones' disembodied voice will utter words of warning, and guests will be able to feel the heartbeat of Jones' heart from within the chest. Skeletons of previous explorers and pirates litter the pits of the cave, implying danger to those who continue to press onward.

Additional features in the cave include "pop-up" gags featuring Pintel and Ragetti from the Pirates of the Caribbean films who are guarding cursed treasure as well as other effects featuring disappearing treasure and a genie in a bottle guarding treasure.

The end of the Dead Man's Grotto cave features an Audio-Animatronics figure of a cursed pirate prisoner. The pirate's cursed state is in reference to the first Pirates film, but is not representative of any specific character or scene. The cursed pirate comes alive in seemingly random intervals, warning onlookers of the danger of the cursed treasure, asking for help, or sometimes dealing threats. A small, high-up window in the prisoner's cell will occasionally reveal a full moon through the clouds in a dark night sky, which transforms the prisoner into his cursed, undead form. 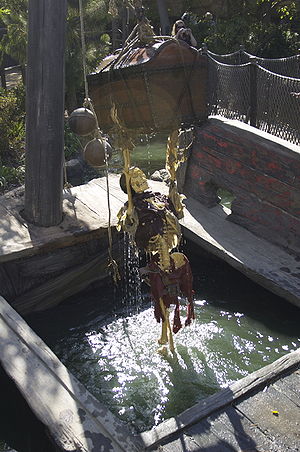 Here be the site of many a dark deed by moonlight. And in these waters, who can tell how much plundered coin lies below in the hold of scuttled ships? And who can tell what forces guard these treasures still?

Smuggler's Cove is a remnant of the original Tom Sawyer Island, however, has been changed dramatically for the Pirate's Lair makeover. The area now appears to be the site of the wreck of a small sailing vessel which was carrying much pirate loot. Smuggler's Cove features several interactive play features including:

The treacherous shoals what surround the island have claimed many a fair vessel and her crew. Here lie broken beams and planks, worn and weathered to serve as memorial, shelter, and lookout perch alike. While below, 'tis said, there lies a king's ransom, hid in some dark passageway, too narrow for most to navigate.

Castle Rock is a large rock structure which features stationary telescopes, giving guests views of specific scenery and points of interest back on the Frontierland and Critter Country mainland. The area was mostly unchanged during the Pirate's Lair re-theme, and only features a couple of hidden pirate chests and themed barrels bearing the East India Trading Company stamp.

No fearsome storm did leave this shipwreck high upon the rocks at Pirate's Den, they say. T'was something monstrous that stirred the sea that day and tore this mighty ship in twain.

That official description of the Shipwreck alludes to the Kraken creature featured in the Pirates of the Caribbean films. The shipwreck is a minor feature, only being a small walk-through feature with no interactive elements. Inside the Shipwreck, Davy Jones' ghostly voice can be heard whispering warnings to those who dare inspect the wreckage. The inside of the wreckage features more state-of-the-art LED lighting design, similar to what is seen on a larger scale in Dead Man's Grotto. The wreckage is littered with barnacles, a skeleton, weaponry, and other features from a pirate ship. 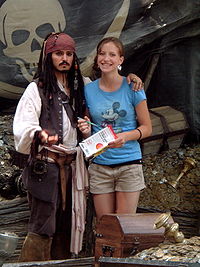 Somewhere beyond Smuggler's Cove and Castle Rock, a fabulous treasure lies. Steady as you go, mates - for it be guarded by the fiercest of pirates. Gather your knowledge of the island well, for all who happen upon this treasure shall be asked to account for themselves. Them what pleases the guards, they say, may be allowed to join the pirate brotherhood and take the solemn oath.

The Captain's Treasure is a large mound of loot at the furthest end of the Island accessible to guests. The area is a photo-op in which guests can pose with the mound of treasure, and often Captain Jack Sparrow can be found posing for photos with guests.

Tom and Huck's Tree House is the only major guest-accessible feature on the Island not to be notably featured on the Explorer's Map of Pirate's Lair on Tom Sawyer Island. The Tree House is a remnant of the original Tom Sawyer Island theme, and is arguably now irrelevant in regards to the Island's pirate theme. The Tree House was mostly unchanged during the Pirate's Lair re-theme, except for a couple of small pirate additions themed to appear as though Tom and Huck made them in the tree house. 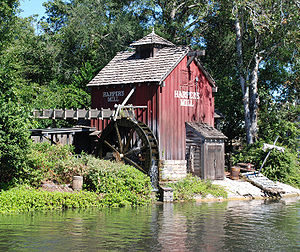