Pittston is a city in Luzerne County, Pennsylvania, United States. It is situated between Scranton and Wilkes-Barre. The city gained prominence in the late 19th and early 20th centuries as an active anthracite coal mining city, drawing a large portion of its labor force from European immigrants. The population was 7,739 as of the 2010 census.[1] At its peak in 1920, the population of Pittston was 18,497. The city consists of three sections: The Downtown (in the center of the city), the Oregon Section (in the southern end), and the Junction (in the northern end).[2] 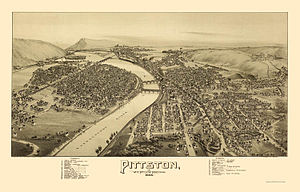 Pittston as depicted on an 1892 panoramic map 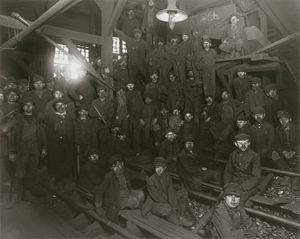 Child laborers at Pittston coal mine, 1911. Photo by Lewis Hine.

Pittston lies in the Wyoming Valley on the east side of the Susquehanna River and on the south side of the Lackawanna River. It is approximately midway between Wilkes-Barre and Scranton. Named after the famous British statesman William Pitt the Elder, the city was settled around 1770 by the Susquehanna Company of Connecticut. It was originally called "Pittstown."

During the Revolutionary War, Connecticut Continentals (Patriots), led by Captain Jeremiah Blanchard and Lieutenant Timothy Keyes, held and maintained a fort in Pittston. On July 4, 1778 (one day after the Battle of Wyoming), a group of British soldiers took over the fortress and some of it was destroyed. Two years later, the Continentals stormed the fortification and recaptured it. From then on it was under Patriot control until the end of the war in 1783, with the signing of the Treaty of Paris. Today a marker stands at the site where the fort once stood.

Pittston broke away from Pittston Township and officially became a borough in 1853. It was later chartered as a city on December 10, 1894.

With the opening of a canal in the 1830s, Pittston became an important link in the coal industry. Money made through the mining and transportation of coal led some of the leading merchants to petition its separation from Pittston Township. The anthracite and railroad industry attracted thousands of immigrants, making Pittston a true melting pot with once-distinct ethnic and class neighborhoods. 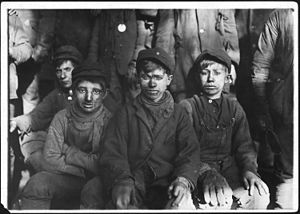 The anthracite coal mining industry, and its extensive use of child labor in the early part of the 20th century, was one of the industries targeted by the National Child Labor Committee and its hired photographer, Lewis Hine. Many of Hine's subjects were photographed in the mines and coal fields in and around Pittston between 1908 and 1912. The impact of the Hine photographs led to the enactment of child labor laws across the country.[3] 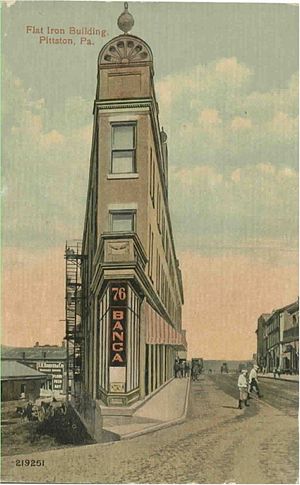 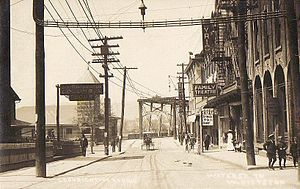 Coal mining remained the prominent industry in Pittston for many decades, but disasters did strike on more than one occasion. The first major tragedy occurred in the Newton Coal Company's Twin Shaft Mine near the city's railroad junction on June 28, 1896, when a massive cave-in killed 58 miners.[4]

Anthracite coal mining remained in Pittston until January 22, 1959, when the Knox Mine Disaster in nearby Port Griffith in Jenkins Township ended the industry completely. There, the ice-laden Susquehanna River broke through the roof of the River Slope Mine of the Knox Coal Company, allowing billions of gallons of river water to flood the interconnected mines. Eighty-one miners were trapped; sixty-nine miners escaped; twelve miners died and their bodies were never recovered.

The heroic efforts of one miner, Myron Thomas of Taylor, led twenty-six miners to safety. Another group of six men was led by Pacifico "Joe" Stella of Pittston. Amedeo Pancotti was part of the second group, and for his remarkable climb out of the Eagle Air Shaft (the only exit available) to the surface, he was awarded the Carnegie Medal for Heroism from the Carnegie Hero Fund Commission. 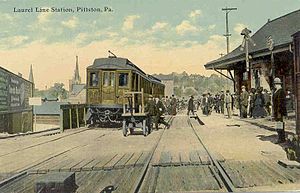 Pittston became an active railroad center in response to its mining and industrial activity. The Lehigh Valley Railroad maintained a beautiful station in downtown Pittston, near the foot of the Water Street Bridge. Sadly, the station did not survive the urban renewal of the 1960s; it was demolished in 1964. Pittston also had a station on the historic Lackawanna and Wyoming Valley Railroad, commonly known as the Laurel Line, an electric interurban streetcar line.

Besides mining anthracite coal, Pittston was home to many industries in the 19th and 20th centuries, including metals, plastics, paper products, apparel, electrical equipment and beverages. The Pittston Stove Company, established in 1864, manufactured coal and wood-burning stoves for heating and cooking. The Pittston Brewing Company, brewers of Glennon's Beer, maintained operations in Pittston from 1873 until 1948. Evan R. Jones Stoneware crafted pottery which bore the Pittston name in the 1870s and 1880s.

Main Street was the site of an active downtown into the 1970s, with many clothing stores, shoe stores, jewelers, JC Penneys, Kresge's, Woolworth's, drug stores, restaurants, theaters and banks.

Main Street was home to at least two theaters, the Roman at 27 South Main and the American at 48 North Main, both of which have been razed. Many historic commercial structures were demolished in the urban renewal efforts of the 1960s. 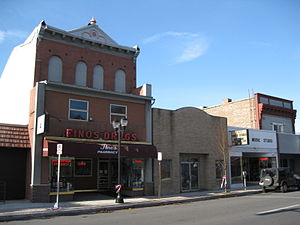 Storefronts in the downtown

On March 15, 1993, two Pittston firefighters (John Lombardo and Len Insalaco) were killed while fighting a blaze on the city's main street. A monument was built in the downtown, and the nearby Water Street Bridge was renamed to commemorate their sacrifice during that tragic March day.

For decades, the towering spires of the many Protestant and Roman Catholic churches dominated the city's skyline. Most of the numerous Catholic churches were established to serve one of the many ethnic communities that made up Pittston. The Irish had St. John the Evangelist and St. Mary Help of Christians, the Slovaks had St. John the Baptist, the Lithuanians had St. Casimir's, the Germans had St. Mary's Assumption, and the Italians had St. Rocco's and Our Lady of Mount Carmel. There is also a Byzantine Catholic Church on Main Street (St. Michael's). From 2004 to the present, the Diocese of Scranton has closed many of the churches and private schools in and around Pittston due to declining population and enrollment. Saint John the Baptist Elementary School closed in 2004, and Seton Catholic High School closed in 2007. St. Mary's Assumption School closed in 2011.

In recent years, the downtown area was renovated with new sidewalks, trees, and street lights. Older buildings are being demolished and newer structures (i.e., condominiums, restaurants, bars, and stores) are being built.

There were 3,493 households, out of which 26.9% had children under the age of 18 living with them, 33.3% were married couples living together, 16.9% had a female householder with no husband present, 6.8% had a Male householder with no wife present, and 43% were non-families. 36% of all households were made up of individuals, and 32% had someone living alone who was 65 years of age or older. The average household size was 2.20 and the average family size was 2.89.

The city is headed by an elected mayor. The current mayor of Pittston is Jason C. Klush.

From 1853-1894, the Borough of Pittston was served by Burgesses serving one year terms.

Incumbent Mayor Jason Klush defeated Eugene M. Rooney Jr. in the May 2013 Democratic primary. Klush went on to win the November general election handily.[16][17] The next mayoral election is scheduled for 2017.

The other city officers are:

In October 2005, it was revealed that Daniel Siniawa and Associates of Dickson City, Pennsylvania, designed a condo complex for Pittston City. The location of this complex is at Kennedy Blvd. (between the Water Street Bridge and East Street). Riverfront Park is located to the west of the development. Each tower, 5 stories in height, will have 45 units. Space is currently being made by destroying CareerLink and other buildings. The Del-Mar Dress Factory and B&G Beverage are also in the process of being purchased and demolished. For more information, visit: http://www.danielsiniawa.com/pittston_waterfront.htm

In 2008, the city invested in renovating the downtown area sidewalks with a brick theme. Colorful brick pavers line the sidewalks along the curbside and at street crossings. Black street lights and sign posts were also placed to enhance the appearance of the downtown.

In December 2009, several buildings along William Street were demolished. These included St. John the Baptist Church and School, St. John the Baptist Catholic Information Library, St. John the Baptist Rectory, the Msgr. Joseph A. Super Athletic Center, and Dave's Billiards. The only building remaining is part of the school where DeMuro's Pizzeria is located. A memorial green space is located on the site of the church, where it had served the Slovak community for over 107 years.

Private schools There were several Catholic schools in the Greater Pittston area; many have been closed by the Diocese of Scranton due to lack of funding and low enrollment.

The City of Pittston promotes itself as "The Quality Tomato Capital of the World." The Pittston Tomato Festival, in its twenty-eighth year in 2011, is held annually on South Main Street in downtown Pittston to celebrate the city's tradition and heritage in cultivating the tomato.

The event consists of many food vendors from the Greater Pittston area, a beauty pageant, a tomato tasting contest, a best looking and ugliest tomato contest, a 5 km run through the city, tomato fights, live entertainment, and a parade. In May 2011, Parade Magazine cited the Pittston Tomato Festival and its tomato fights.

Interstate 81 and US Route 11 pass near Pittston, heading north to Binghamton and south to Harrisburg. Pittston is also located near the Northeast Extension of the Pennsylvania Turnpike, Interstate 476, providing a link to Allentown and Philadelphia.

The Wilkes-Barre/Scranton International Airport is located in Pittston Township. The airport is served by eight international airlines and has hosted Air Force One on regional presidential visits several times in the past. In the spring of 2002, the airport began offering an increased number of non-stop flights across the nation. Service is provided by Allegiant, Delta, United Airlines, and US Airways.

Pittston is served by the Luzerne County Transportation Authority and COLTS, which provides bus services to the city and other communities within Luzerne County and Lackawanna County. Martz Trailways also provides commuter, tour, and trip service from Pittston, and nearby locations in downtown Scranton and Wilkes-Barre to points east and south, such as Philadelphia, New York City, and Atlantic City.

At present, the Reading Blue Mountain & Northern Railroad, Canadian Pacific Railway (successor to the Delaware and Hudson) and the Luzerne & Susquehanna Railroad (designated-operator of the county-owned shortline) provide freight service within the city and Pittston Township. A proposed nearby commuter train from Scranton to New York City has received government funding.