From Infogalactic: the planetary knowledge core
(Redirected from Places of historical interest in Sindh)
Jump to: navigation, search

Sindh is a province in Pakistan. The Indus Valley Civilization (IVC) was a Bronze Age civilization (mature period 2600–1900 BCE) which was centred mostly in the Sindh.

Sindh has numerous tourist sites with the most prominent being the ruins of Mohenjo-daro near the city of Larkana. Islamic architecture is quite prominent in the province with the Jama Masjid in Thatta built by the Mughal emperor Shahjahan and numerous mausoleums dot the province including the very old Shahbaz Qalander mausoleum dedicated to the Iranian-born Sufi and the beautiful mausoleum of Muhammad Ali Jinnah known as the Mazar-e-Quaid in Karachi. 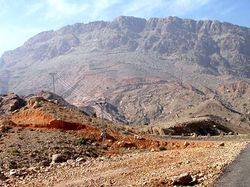 Gorakh Hill, is one of the Highest Plateaus of Sindh, in the Kerthar Mountains Range, in the North-West section of Dadu District, Dividing the Dadu and Khuzdar Districts, of Sindhh and Balochistan. Gorakh Hill Station is an under Development Project, but Gorkah Hilltop site can be reached from Dadu City.

It is the largest fort of its kind in the region and in the world, It is situated in the Kirthar Range about 30 km southwest of Sann, Jamshoro district of Sindh, approximately 90 km north of Hyderabad, in Pakistan. It has an approximate diameter of 9 km. Its walls are on the average 6 meters high and are made of gypsum and lime cut sandstone and its total circumference is about 29 km of which 8 km walls are man-made. While originally constructed for bow and arrow warfare it was later expanded to withstand firearms.

About 64 km east of Karachi, on the National Highway, is an interesting archaeological site, Bhambore, originally the seaport of Debal where the young Arab warrior Muhammad bin Qasim landed his armies in 711 AD. Three different periods in Sindh history coincide here: the Scytho-Parthian, the Hindu-Buddhist and the early Islamic. There is a museum and a rest house at the site.

The Chaukundi Tombs are attributed to Jokhio and Baloch tribes and were built between 15th and 18th centuries. It is situated 20 km east of Karachi.

Once a famous center of learning, arts and commerce and provisional capital for about four centuries in the past, Thatta is situated 98 km east of Karachi. Today, it is notable for the Jamia Masjid built by the Moghal Emperor Shah Jehan, and the Makli Tombs (15th - 17th centuries), a vast necropolis spread over 15.5 km², depicting exquisite specimens of architecture, stone carvings and glazed tile decorations. 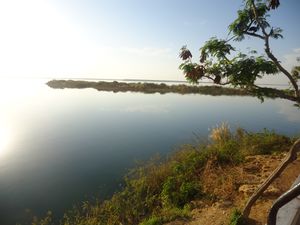 Some 24 km north of Thatta, is the large man-made Keenjhar Lake, which is 30 km long and 10 km wide. The lake has facilities for angling and boating. PTDC motels offer food and accommodation.

One of the largest necropolises in the world, with a diameter of approximately 8 kilometers, the Makli Tombs are supposed to be the burial place of some 125,000 Sufi saints. It is located on the outskirts of Thatta, the capital of lower Sind until the seventeenth century, in what is the southeastern province of present-day Pakistan.

Located about 48 km from Karachi in the midst of the barren rocks of the Kirthar Range in Dadu district, near Thano Boola Khan is Kirthar National Park. Designed and planned with the help of the research and planning group of the International Union for the Conservation of Nature and Natural Resources, the park is approved and recognized by international wildlife bodies. It is the last bastion of a wide variety of the region's wildlife that includes Sindh ibex, urial, deer, leopard, gray partridges and Macqueen's bustard (Asian houbara). The Sindh Wildlife Management Board plans tours and provides transport from Karachi.

Situated at about 164 km northeast of Karachi, Hyderabad was the capital of Sindh during the reign of the Talpur Mirs in the 18th and 19th centuries. Today, it is known for Mehran University of Engineering & Technology(MUET) and Sindh University, Jamshoro; the provincial museum; the Institute of Sindhology and the Sindhi Adabi Board and also for colourful handicrafts such as glass bangles, glazed tiles, lacquered wood furniture, handloom cloth called 'soosi', block-printed 'Ajrak', leather shoes, etc. Historic monuments include old Mud Fort, Sheikh Makai Fort, Kalhoro Monuments, Talpur Monuments and Miani Forest.

Hala is famous for its glazed pottery and enameled wood work. Situated on the National Highway about 56 km from Hyderabad, it is frequently visited by hundreds of devotees of Hazrat Makhdoom Noah (10th century Hijra), a contemporary of Mughal Emperor Akbar and a religious divine, who converted a large number of people of Islam and also translated the Quran into Persian which is one of its earliest Persian translations in South Asia.

Situated at about 56 km from Hyderabad on the National Highway, Bhitshah is the resting place of Sindh's renowned saint and mystic poet Hazrat Shah Abdul Latif Bhitai (1689–1752). He is remembered for the compendium of his poetry called 'Risalo', a treasure house of wisdom as well as romantic folklore and fine pottery. He also founded a musical tradition of his own which is still popular. Devotees sing with fervor and frenzy his love-intoxicated Kafis to the strains of yak-tara (single string instrument) mainly on the occasion of his "Urs" held every year between 13th and 15th of Saffar, the second Islamic lunar month.

Situated on the right bank of River Indus at a distance of 135 km from Hyderabad, Sehwan is an old town of pre-Islamic period. Here are the remains of Kafir-Qila, a fort reported to have been constructed by Alexander the Great. Sehwan is famous for the resting place of the great mystic poet, saint and scholar Shaikh Usman Marvandvi (1117–1274), popularly known as Shahbaz Qalandar whose mausoleum is visited by thousands of the devotees throughout the year. During the Urs celebrations (18th Shahban - the eighth Islamic lunar month), devotees dance rhythmically and with total abandon to the beat of drums (Naqqara Dhamal), finally ending in a spiritual trance.

About 16 km from Sehwan, Manchar, the largest fresh water lake in Asia, is as old as the Indus River. Spread over 254 km², it is a perfect spot for relaxing and the best location for duck-shooting during winter. 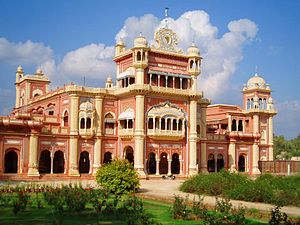 Daraza Sharif, a small village, some 52 km from Khairpur, is known for the tomb of Sachal Sarmast who was a great master of Islamic learning, lived a pious life and composed poetry in Sindhi, Seraiki, Persian and Urdu. Sachal Sarmast's Urs is celebrated on 14th of Ramzan (9th month of Islamic lunar calendar).

Kot Deji is regarded as one of the world's most important archaeological sites, dating back to 3000 BC, older than Moen-jo-daro and Harappa. Excavations made in 1955 unearthed an astoundingly well-organized city with a citadel that testifies to its being the finest fortified town in South Asia.

About 563 km from Karachi off the Indus Highway lie the world-famous ruins of Moen-jo-Daro (the Mound of the Dead), now being preserved with UNESCO's help. The museum at Moen-jo-Daro is unique and a visit takes you back centuries back when the location was a civilized city and a busy river Port. Air and train services from Karachi and an air-conditioned rest house have been built there.

Among other historical sites are Amri, Umerkot (the birthplace of Mughal Emperor Akbar) and the legendary Arab city of Mansura near Shahdadpur in Sanghar District. Other interesting places include Matiari, town of old beautiful mosques and one of the centers of 'Ajrak'. On its outskirts lie the ruins of a Buddhist stupa. Nasarpur is famous for 'Khes', exquisite embroidery, decorative pottery, and wood work. It is also a holy place for the Hindu community.