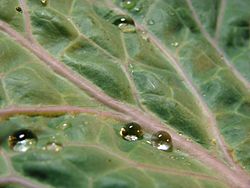 Water beads on the waxy cuticle of kale leaves 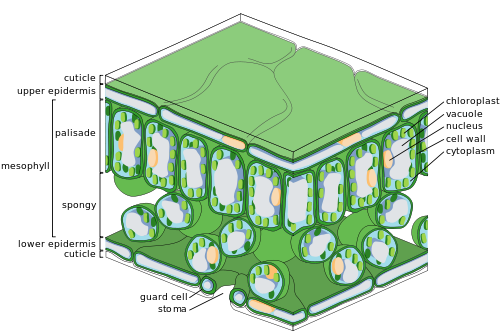 Anatomy of a eudicot leaf

A plant cuticle is a protecting film covering the epidermis of leaves, young shoots and other aerial plant organs without periderm. It consists of lipid and hydrocarbon polymers impregnated with wax, and is synthesized exclusively by the epidermal cells.[1]

The plant cuticle is a layer of lipid polymer impregnated with waxes that is present on the outer surfaces of the primary organs of all vascular land plants. It is also present in the sporophyte generation of hornworts, and in both sporophyte and gametophyte generations of mosses [2] The plant cuticle forms a coherent outer covering of the plant that can be isolated intact by treatment of plant tissue with enzymes such as pectinase and cellulase.

The cuticle is composed of an insoluble cuticular membrane impregnated by and covered with soluble waxes. Cutin, a polyester polymer composed of inter-esterified omega hydroxy acids which are cross-linked by ester and epoxide bonds, is the best-known structural component of the cuticular membrane.[3][4] The cuticle can also contain a non-saponifiable hydrocarbon polymer known as Cutan.[5] The cuticular membrane is impregnated with cuticular waxes[6] and covered with epicuticular waxes, which are mixtures of hydrophobic aliphatic compounds, hydrocarbons with chain lengths typically in the range C16 to C36.[7]

The primary function of the plant cuticle is as a water permeability barrier that prevents evaporation of water from the epidermal surface, and also prevents external water and solutes from entering the tissues.[citation needed] In addition to its function as a permeability barrier for water and other molecules (prevent water loss), the micro and nano-structure of the cuticle confer specialised surface properties that prevent contamination of plant tissues with external water, dirt and microorganisms. Aerial organs of many plants, such as the leaves of the sacred lotus (Nelumbo nucifera) have ultra-hydrophobic and self-cleaning properties that have been described by Barthlott and Neinhuis (1997).[8] The lotus effect has applications in biomimetic technical materials.

Dehydration protection provided by a maternal cuticle improves offspring fitness in the moss Funaria hygrometrica.[2] and in the sporophytes of all vascular plants. In angiosperms the cuticle tends to be thicker on the top of the leaf (adaxial surface), but is not always thicker in xerophytic plants living in dry climates than in mesophytic plants from wetter climates, despite a persistent myth to that effect.

"The waxy sheet of cuticle also functions in defense, forming a physical barrier that resists penetration by virus particles, bacterial cells, and the spores or growing filaments of fungi". [9]

The plant cuticle is one of a series of innovations, together with stomata, xylem and phloem and intercellular spaces in stem and later leaf mesophyll tissue, that plants evolved more than 450 million years ago during the transition between life in water and life on land.[10] Together, these features enabled upright plant shoots exploring aerial environments to conserve water by internalising the gas exchange surfaces, enclosing them in a waterproof membrane and providing a variable-aperture control mechanism, the stomatal guard cells, which regulate the rates of transpiration and CO2 exchange.