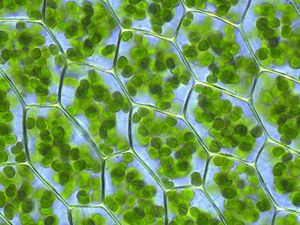 The plastid (Greek: πλαστός; plastós: formed, molded – plural plastids) is a major double-membrane organelle[1] found, among others, in the cells of plants and algae. Plastids are the site of manufacture and storage of important chemical compounds used by the cell. They often contain pigments used in photosynthesis, and the types of pigments present can change or determine the cell's color. They have a common origin and possess a double-stranded DNA molecule that is circular, like that of prokaryotes. 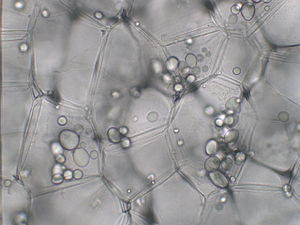 Those plastids that contain pigments can carry out photosynthesis. Plastids can also store products like starch and can synthesise fatty acids and terpenes, which can be used for producing energy and as raw material for the synthesis of other molecules. For example, the components of the plant cuticle and its epicuticular wax are synthesized by the epidermal cells from palmitic acid, which is synthesized in the chloroplasts of the mesophyll tissue.[2] All plastids are derived from proplastids, which are present in the meristematic regions of the plant. Proplastids and young chloroplasts commonly divide by binary fission, but more mature chloroplasts also have this capacity.

In plants, plastids may differentiate into several forms, depending upon which function they play in the cell. Undifferentiated plastids (proplastids) may develop into any of the following variants:[3]

Depending on their morphology and function, plastids have the ability to differentiate, or redifferentiate, between these and other forms.

Each plastid creates multiple copies of a circular 75–250 kilobase plastome. The number of genome copies per plastid is variable, ranging from more than 1000 in rapidly dividing cells, which, in general, contain few plastids, to 100 or fewer in mature cells, where plastid divisions have given rise to a large number of plastids. The plastome contains about 100 genes encoding ribosomal and transfer ribonucleic acids (rRNAs and tRNAs) as well as proteins involved in photosynthesis and plastid gene transcription and translation. However, these proteins only represent a small fraction of the total protein set-up necessary to build and maintain the structure and function of a particular type of plastid. Plant nuclear genes encode the vast majority of plastid proteins, and the expression of plastid genes and nuclear genes is tightly co-regulated to coordinate proper development of plastids in relation to cell differentiation.

Plastid DNA exists as large protein-DNA complexes associated with the inner envelope membrane and called 'plastid nucleoids'. Each nucleoid particle may contain more than 10 copies of the plastid DNA. The proplastid contains a single nucleoid located in the centre of the plastid. The developing plastid has many nucleoids, localized at the periphery of the plastid, bound to the inner envelope membrane. During the development of proplastids to chloroplasts, and when plastids convert from one type to another, nucleoids change in morphology, size and location within the organelle. The remodelling of nucleoids is believed to occur by modifications to the composition and abundance of nucleoid proteins.

In plant cells, long thin protuberances called stromules sometimes form and extend from the main plastid body into the cytosol and interconnect several plastids. Proteins, and presumably smaller molecules, can move within stromules. Most cultured cells that are relatively large compared to other plant cells have very long and abundant stromules that extend to the cell periphery.

In algae, the term leucoplast is used for all unpigmented plastids and their function differs from the leucoplasts of plants. Etioplasts, amyloplasts and chromoplasts are plant-specific and do not occur in algae.[citation needed] Plastids in algae and hornworts may also differ from plant plastids in that they contain pyrenoids.

Plastids are thought to have originated from endosymbiotic cyanobacteria. This symbiosis evolved around 1.5 billion years ago[7] and enabled eukaryotes to carry out oxygenic photosynthesis.[8] Three evolutionary lineages have since emerged in which the plastids are named differently: chloroplasts in green algae and plants, rhodoplasts in red algae and muroplasts in the glaucophytes. The plastids differ both in their pigmentation and in their ultrastructure. For example, chloroplasts have lost all phycobilisomes, the light harvesting complexes found in cyanobacteria, red algae and glaucophytes, but instead contain stroma and grana thylakoids, structures found only in plants and closely related green algae. The glaucocystophycean plastid — in contrast to chloroplasts and rhodoplasts — is still surrounded by the remains of the cyanobacterial cell wall. All these primary plastids are surrounded by two membranes.

Complex plastids start by secondary endosymbiosis (where a eukaryotic organism engulfs another eukaryotic organism that contains a primary plasmid resulting in its endosymbiotic fixation),[9] when a eukaryote engulfs a red or green alga and retains the algal plastid, which is typically surrounded by more than two membranes. In some cases these plastids may be reduced in their metabolic and/or photosynthetic capacity. Algae with complex plastids derived by secondary endosymbiosis of a red alga include the heterokonts, haptophytes, cryptomonads, and most dinoflagellates (= rhodoplasts). Those that endosymbiosed a green alga include the euglenids and chlorarachniophytes (= chloroplasts). The Apicomplexa, a phylum of obligate parasitic protozoa including the causative agents of malaria (Plasmodium spp.), toxoplasmosis (Toxoplasma gondii), and many other human or animal diseases also harbor a complex plastid (although this organelle has been lost in some apicomplexans, such as Cryptosporidium parvum, which causes cryptosporidiosis). The 'apicoplast' is no longer capable of photosynthesis, but is an essential organelle, and a promising target for antiparasitic drug development.

Some dinoflagellates and sea slugs, in particular of the genus Elysia, take up algae as food and keep the plastid of the digested alga to profit from the photosynthesis; after a while, the plastids are also digested. This process is known as kleptoplasty, from the Greek, kleptes, thief.