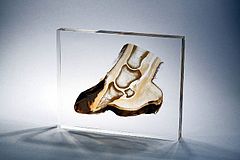 A plastinated and sectioned example of a diseased horse's hoof, mounted for teaching purposes.

Plastination is a technique or process used in anatomy to preserve bodies or body parts, first developed by Gunther von Hagens in 1977.[1] The water and fat are replaced by certain plastics, yielding specimens that can be touched, do not smell or decay, and even retain most properties of the original sample.[2] 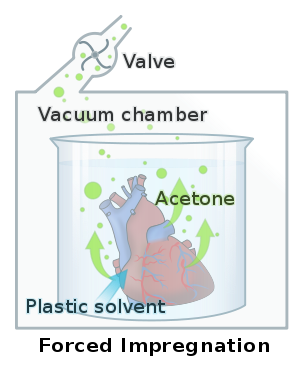 The centerpiece of plastination: "forced impregnation"

There are four steps in the standard process of plastination: fixation, dehydration, forced impregnation in a vacuum, and hardening.[3] Water and lipid tissues are replaced by curable polymers. Curable polymers used by plastination include silicone, epoxy and polyester-copolymer.[3]

The first step of plastination is fixation.[4] Fixation, frequently utilizing a formaldehyde based solution, serves two functions. Dissecting the specimen to show specific anatomical elements can be time consuming. Formaldehyde or other preserving solutions help prevent decomposition of the tissues. They may also confer a degree of rigidity. This can be beneficial in maintaining the shape or arrangement of a specimen. A stomach might be inflated or a leg bent at the knee for example.

After any necessary dissections have taken place, the specimen is then placed in a bath of acetone. Under freezing conditions, the acetone draws out all the water and replaces it inside the cells.[5]

In the third step, the specimen is then placed in a bath of liquid polymer, such as silicone rubber, polyester or epoxy resin. By creating a vacuum, the acetone is made to boil at a low temperature. As the acetone vaporizes and leaves the cells, it draws the liquid polymer in behind it, leaving a cell filled with liquid plastic.[5]

The plastic must then be cured with gas, heat, or ultraviolet light, in order to harden it.[4]

A specimen can be anything from a full human body to a small piece of an animal organ, and they are known as 'plastinates'.[citation needed] Once plastinated, the specimens and bodies are further manipulated and positioned prior to curing (hardening) of the polymer chains.[citation needed]

In November 1979, Gunther von Hagens applied for a German patent, proposing the idea of preserving animal and vegetable tissues permanently by synthetic resin impregnation.[6] Since then, von Hagens has applied for further US patents regarding work on preserving biological tissues with polymers.[7][8]

Other methods have been in place for thousands of years to halt the decomposition of the body. Mummification used by the Egyptians is a widely known method which involves the removal of body fluid and wrapping the body in linens. Prior to mummification, Egyptians would lay the body in a shallow pit in the desert and allow the sun to dehydrate the body.[10]

Formalin, an important solution to body preservation, was introduced in 1896 to help with body preservation. Soon to follow formalin, color preserving embalming solutions were developed to preserve lifelike color and flexibility to aid in the study of the body.[11]

Paraffin impregnation was introduced in 1925 and the embedding of organs in plastic was developed in the 1960s.[citation needed]

Body preservation methods current to the twenty-first century are cryopreservation, which involves the cooling of the body to very low temperatures to preserve the body tissues, plastination and embalming.[12]

Other methods used in modern times include the Silicone S 10 Standard Procedure, the Cor-Tech Room temperature procedure, the Epoxy E 12 procedure, and the Polyester P 35 (P 40) procedure.[13] The Silicone S 10 is the procedure most often used in plastination and creates opaque, natural-looking specimen.[14] Dow Corning Corporation's Cor-Tech Room Temperature Procedure is designed to allow plastination of specimen at room temperature to various degrees of flexibility using three combinations of polymer, crosslinker and catalyst.[15] According to the International Society for Plastination, the Epoxy E 12 procedure is utilized "for thin, transparent, and firm body and organ slices", while the Polyster P 35 (P 40) preserves "semitransparent and firm brain slices".[13] Samples are prepared for fixation through the first method by deep freezing,[16] while the second method works best following 4–6 weeks of preparation in a formaldehyde mixture.[17]

Plastination is useful in anatomy as well as serving as models and teaching tools.[18] Plastination is used at more than 40 medical and dental schools throughout the world as an adjunct to anatomical dissection. 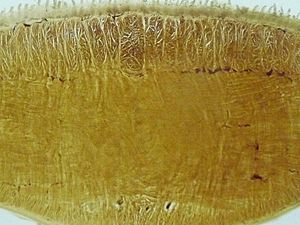 Students enrolled in introductory animal science courses at many universities learn animal science through collections of multi-species large-animal specimens. Plastination allows students to have hands on experience in this field, without exposure to chemicals such as formalin. For example, plastinated canine gastrointestinal tracts are used to help in the teaching of endoscopic technique and anatomy.[19] The plastinated specimens retain their dilated conformation by a positive pressure air flow, which allows them to be used to teach both endoscopic technique and gastrointestinal anatomy.

With the use of plastination as a teaching method of animal science, fewer animals have to be killed for research, as the plastination process allows specimens to be studied for a long time.[20]

TTT sheet plastinates for school teaching and lay instruction provide a thorough impression of the complexity of an animal body in just one specimen. 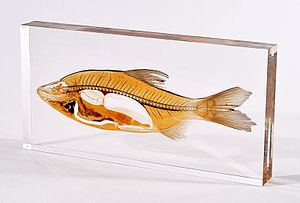 TTT sheet plastinate of a fish

The North Carolina State University's College of Veterinary Medicine in Raleigh, North Carolina uses both PC (plastic coating) and PN (plastination) to investigate and compare the difference in the two methods. The PC method was simple and inexpensive, but the plastinated specimens (PN method) were more flexible, durable, and lifelike than those preserved by the PC method. The use of plastination allowed the use of many body parts such as muscle, nerves, bones, ligaments, and central nervous system to be preserved.[21]

The University of Texas Health Science Center at San Antonio was the first school in the United States to use this technique to prepare gross organ specimens for use in teaching.[22] The New York University College of Dentistry.,[18] Philadelphia College of Osteopathic Medicine, [23] University of Warwick, and University of Northumbria [24] use collections of plastinates as teaching aids. The University of Vienna has its own plastination laboratory.[25]

Concern over consent of bodies being used in the plastination process has arisen. Over 20 years ago, von Hagens set up a body donation program in Germany and has signed over 9,000 donors into the plastinate program: 531 have already died. The program has reported an average of one body a day being released to the plastination process. Ninety percent of the donors registered are German. Although von Hagens says he follows strict consent procedures for whole-body specimens, he maintains that "consent is not important for body parts."[citation needed][clarification needed] Von Hagens' body donations are now being managed by the Institute for Plastination (IfP)[26] established in 1993.[27]

For the first 20 years, plastination was used to preserve small specimens for medical study. It was not until the early 1990s that the equipment was developed to make it possible to plastinate whole body specimens, each specimen taking up to 1,500 man hours to prepare.[28] The first exhibition of whole bodies was displayed by von Hagens in Japan in 1995.

Over the next two years, Von Hagens developed the Körperwelten (BODY WORLDS) public exhibitions, showing whole bodies plastinated in lifelike poses and dissected to show various structures and systems of human anatomy. The earliest exhibitions were presented in the Far East and in Germany, and Gunther von Hagens' BODY WORLDS exhibitions have subsequently been hosted by museums and venues in more than 50 cities worldwide, attracting more than 29 million visitors.[citation needed].

Gunther von Hagens' BODY WORLDS exhibitions are the original, precedent-setting public anatomical exhibitions of real human bodies, and the only anatomical exhibits that use donated bodies, willed by donors to the Institute for Plastination for the express purpose of serving the BODY WORLDS mission to educate the public about health and anatomy. To date, more than 10,000 people have agreed to donate their bodies to Institute for Plastination.[26]

Plastination galleries are offered in a few college medical schools including University of Michigan (said to be the nation's largest such lab)[30] and the Vienna University[31] Gunther von Hagens maintains a permanent exhibition of plastinates and plastination at the Plastinarium in Guben, Germany.[citation needed]