Plate reconstruction is the process of reconstructing the positions of tectonic plates relative to each other (relative motion) or to other reference frames, such as the earth's magnetic field or groups of hotspots, in the geological past. This helps determine the shape and make-up of ancient supercontinents and provides a basis for paleogeographic reconstructions.

An important part of reconstructing past plate configurations is to define the edges of areas of the lithosphere that have acted independently at some time in the past.

Most present plate boundaries are easily identifiable from the pattern of recent seismicity.[1] This is now backed up by the use of GPS data, to confirm the presence of significant relative movement between plates.

Identifying past (but now inactive) plate boundaries within current plates is generally based on evidence for an ocean that has now closed up. The line where the ocean used to be is normally marked by pieces of the crust from that ocean, included in the collision zone, known as ophiolites.[2] The line across which two plates became joined to form a single larger plate, is known as a suture.

In many orogenic belts, the collision is not just between two plates, but involves the sequential accretion of smaller terranes. Terranes are smaller pieces of continental crust that have been caught up in an orogeny, such as continental fragments or island arcs.

Plate motions, both those observable now and in the past, are referred ideally to a reference frame that allows other plate motions to be calculated. For example, a central plate, such as the African plate, may have the motions of adjacent plates referred to it. By composition of reconstructions, additional plates can be reconstructed to the central plate. In turn, the reference plate may be reconstructed, together with the other plates, to another reference frame, such as the earth's magnetic field, as determined from paleomagnetic measurements of rocks of known age. A global hotspot reference frame has been postulated (see, e.g., W. Jason Morgan) but there is now evidence that not all hotspots are necessarily fixed in their locations relative to one another or the earth's spin axis.[3] However, there are groups of such hotspots that appear to be fixed within the constraints of available data, within particular mesoplates.[4]

The movement of a rigid body, such as a plate, on the surface of a sphere can be described as rotation about a fixed axis (relative to the chosen reference frame). This pole of rotation is known as an Euler pole. The movement of a plate is completely specified in terms of its Euler pole and the angular rate of rotation about the pole. Euler poles defined for current plate motions can be used to reconstruct plates in the recent past (few million years). At earlier stages of earth's history, new Euler poles need to be defined.[3] It was suggested recently that paleomagnetic Euler poles derived from apparent polar wander path could potentially extend the upper age limit of marine geophysical observations and hot spot traces.[5]

In order to move plates backward in time it is necessary to provide information on either relative or absolute positions of the plates being reconstructed such that an Euler pole can be calculated. These are quantitative methods of reconstruction.[6]

Certain fits between continents, particularly that between South America and Africa, were known long before the development of a theory that could adequately explain them. The reconstruction before Atlantic rifting by Bullard based on a least-squares fitting at the 500 fathom contour still provides the best match to paleomagnetic pole data for the two sides from the middle of Paleozoic to Late Triassic.[6]

Plate reconstructions in the recent geological past mainly use the pattern of magnetic stripes in oceanic crust to remove the effects of seafloor spreading. The individual stripes are dated from magnetostratigraphy so that their time of formation is known. Each stripe (and its mirror image) represents a plate boundary at a particular time in the past, allowing the two plates to be repositioned relative to one another. The oldest oceanic crust is of Jurassic age, providing a lower age limit of about 175 Ma for the use of such data. Reconstructions derived in this way are only relative.[6]

Paleomagnetic pole data is obtained by taking oriented samples of rock. Good quality poles have been recovered from many different rock types. In igneous rocks, the magnetic minerals have cooled through the curie point, typically providing good quality poles. Metamorphic rocks may contain new magnetic minerals but are not normally used to obtain poles due to their typically high magnetic anisotropy. Sedimentary rocks generally have a complex set of magnetic components such as derived clasts and mineral grains with their own inherited magnetization, primary magnetization acquired at the time of sedimentation and secondary magnetization related to subsequent diagenesis and authigenic mineral growth.[7] Progressive demagnetization is used to discriminate between the components to identify the primary magnetization. The poles shown by the primary magnetization represent a record of their position relative to the magnetic pole at the time when the rock was formed. Suitable rocks of the right age are not present everywhere, so some pieces of the puzzle remain very unconstrained.

Good quality magnetic poles are added to the Global Paleomagnetic Database, which is accessible from the World Data Center A in the USA at Boulder, Colorado; and from the Norwegian Geological Survey in Trondheim.[8][9]

Poles from different ages in a single area can be used to construct an apparent polar wander (APW) path. If paths from adjacent crustal fragments are identical, this is taken to indicate that there has been no relative movement between them during the period covered by the path. Divergence of APW paths indicates that the areas in question have acted independently in the past with the point of divergence marking the time at which they became joined.[10]

Observed paleomagnetic poles show only the approximate latitude at the time but provide no constraint on the longitude. For this reason older plate reconstructions have much larger uncertainties associated with them. Paleomagnetic Euler rotations (rotation poles and angles) and the mantle structures, however, could provide clues to this longstanding challenge.

The presence of chains of volcanic islands and seamounts interpreted to have formed from fixed hotspots allows the plate on which they sit to be progressively restored so that a seamount is moved back over the hotspot at its time of formation. This method can be used back to the Early Cretaceous, the age of the oldest evidence for hotspot activity. This method gives an absolute reconstruction of both latitude and longitude, although before about 90 Ma there is evidence of relative motion between hotspot groups.[11]

Once oceanic plates subduct in the lower mantle (slabs), they are assumed to sink in a near-vertical manner. With the help of seismic wave tomography, this can be used to constrain plate reconstructions at first order back to the Permian.[12]

In addition to the constraints for the paleolatitude and azimuthal orientation of the studied plate at a certain age, paleomagnetic Euler poles estimated from the geometry of apparent polar wander paths (APWPs) enables the calculation of paleolongitude from paleomagnetism as well. This method potentially allows the reconstructions of absolute plate motion back to Late Paleozoic as long as there are reliable APWPs.[5]

Other evidence for past plate configurations 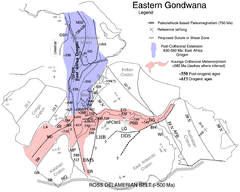 Some plate reconstructions are supported by other geological evidence, such as the distribution of sedimentary rock types, the position of orogenic belts and faunal provinces shown by particular fossils. These are semi-quantitative methods of reconstruction.[6]

Some types of sedimentary rock are restricted to certain latitudinal belts. Glacial deposits for instance are generally confined to high latitudes, whereas evaporites are generally formed in the tropics.[13]

Oceans between continents provide barriers to plant and animal migration. Areas that have become separated tend to develop their own fauna and flora. This is particularly the case for plants and land animals but is also true for shallow water marine species, such as trilobites and brachiopods, although their planktonic larvae mean that they were able to migrate over smaller deep water areas. As oceans narrow before a collision occurs, the faunas start to become mixed again, providing supporting evidence for the closure and its timing.[6]

When supercontinents break up, older linear geological structures such as orogenic belts may be split between the resulting fragments. When a reconstruction effectively joins up orogenic belts of the same age of formation, this provides further support for the reconstruction's validity.[6]