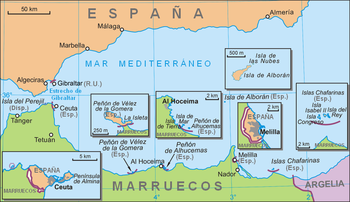 The plazas de soberanía, plus Ceuta, Melilla, and Alborán Island.

The plazas de soberanía (Spanish pronunciation: [ˈplaθaz ðe soβeɾaˈni.a], literally "places of sovereignty") are the Spanish sovereign territories in continental North Africa bordering Morocco. The name refers to the fact that these territories have been a part of Spain since the formation of the modern Spanish State (1492–1556), to distinguish them from territories obtained during the 19th and 20th century. A part of Spain in all respects, they are also a part of the European Union and the Schengen Area. 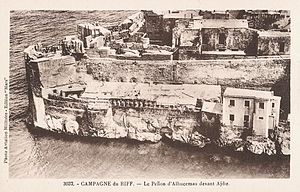 During the Reconquista and mainly following the conquest of Granada in 1492, forces of the Castilian and Portuguese kingdoms conquered and maintained numerous posts in North Africa for trade and as a defence against Barbary piracy.

In 1848, Spanish troops conquered the Islas Chafarinas. In the late 19th century, after the so-called Scramble for Africa, European nations had taken over colonial control of most of the African continent. The Treaty of Fez (signed on March 30, 1912) made most of Morocco a protectorate of France, while Spain assumed the role of protecting power over the northern part, Spanish Morocco.[2]

When Spain relinquished its protectorate and recognized Morocco's independence in 1956, it did not give up these minor territories. Spain had held them well before the establishment of its protectorate.

On July 11, 2002, Morocco stationed six navy cadets on Perejil Island to tackle illegal immigration, which was at the time a source of complaint by Spain. The Spanish Armed Forces responded by launching a military operation code-named Operation Romeo-Sierra. The attack was carried out by Spanish commandos of Grupo de Operaciones Especiales. The Spanish Navy and Spanish Air Force provided support; the six Moroccan navy cadets did not offer any resistance and were captured and evicted from the island. It has since been evacuated by both countries.[3] 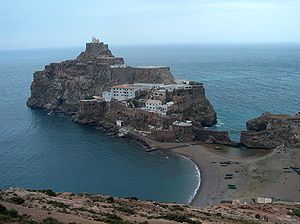 Apart from the three distinct groups, there are two other islands usually considered within the plazas de soberanía.

The disputed Isla Perejil, a small uninhabited islet close to Ceuta, considered by Spain to be a part of Ceuta and not a territory in its own right.[4]

The Isla de Alborán, another small island in the western Mediterranean, about 50 kilometres (31.05 miles) from the African coast and 90 kilometres (55.92 miles) from Europe, is attached to the municipality of Almería on the Iberian Peninsula.

The plazas de soberanía are small islands and peninsulas off the coast of Morocco (the only peninsula, Peñón de Vélez de la Gomera, was an island until a 1934 storm formed a sand bridge with the mainland). They are guarded by military garrisons and administered directly by the Spanish central government.

Just like Ceuta and Melilla, they are an integral part of Spain, therefore also part of the European Union, and their currency is the euro.

Morocco claims sovereignty over the Spanish North African territories, plus the autonomous cities of Ceuta and Melilla.